Hyperconvergence: Helping IT Move The Needle

Hyperconverged infrastructure provides enterprises with flexibility and ease of use that can allow them to break from old IT practices.
Susan Fogarty

Enterprise IT is often a victim of unnecessary complexity and purpose-built infrastructure. Hyperconverged infrastructure can remedy that by offering simplicity, quick installation and high performance, according to several industry experts and practitioners.

Speaking at Interop Las Vegas last week, Wikibon senior analyst Stu Miniman pointed out that 80% of IT resources are spent on "just keeping the lights on." In the past 15 years, he said, that number has not changed. It's clearly time for more efficient practices that can help to "move the needle," and hyperconvergence is one of them.

Hyperconverged infrastructure integrates compute, storage, networking and virtualization -- sometimes along with other features like security and WAN optimization -- in a single appliance or software system installed on commodity hardware. Chris Wahl, president of Wahl Network, spoke about the technology in his conference session, A No-Nonsense Approach to Hyperconvergence.

The concept is taking off. Wahl estimated 27 different vendors in the burgeoning space, with Nutanix and SimpliVity at the forefront (see Network Computing's overview here). He described two major product types: those offered as a software pure-play, and the integrated appliance. Unlike converged infrastructure, which aggregates multiple components in a rack or chassis, hyperconverged systems are modular components themselves that are designed to scale out. Additional nodes can be added and managed with a "distributed operating system and scale-out storage via software" as Wahl described it. 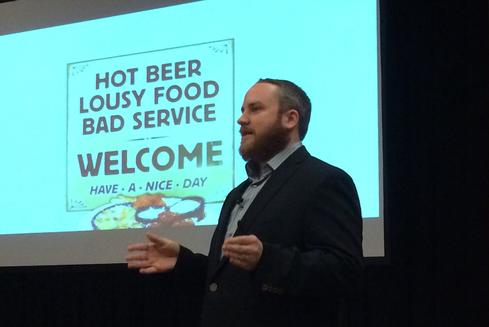 Miniman said the software is the central focus, but the integration of the stack is also critical. The combination provides a standardized yet flexible way for IT organizations to provide a strong IT architecture and focus instead on the applications its business needs.

This ability is a first step toward delivering the webscale technologies and philosophies developed by web giants like Google and Amazon to the enterprise, said Miniman. Hyperconvergence packages the scalability and efficiency these companies are leveraging and translates them to the enterprise in a consumable way.

Enterprises are adopting hyperconverged infrastructure faster than anyone anticipated, Miniman said, resulting in $6B in revenue in 2014. By 2020, Wikibon predicts that three quarters of all infrastructure will be bought in some kind of converged manner.

Ease of use is the biggest draw. "It typically takes longer to remove it from the box than to deploy it," Wahl remarked, compared to a converged infrastructure rack such as VCE's Vblock, which can take multiple IT pros up to two weeks of implementation time. However, benefits from quick installation only occur once.

But the easy set-up makes spinning up new applications and capacity simpler than in the past. Enterprises have a tendency to create the "gold standard" of IT for their organization, and then lock it down where it remains unchanged for years. Miniman referred to this as "putting your IT in an iceberg." Modern-day enterprises need far more agility and speed to compete.

While Miniman predicted the end of the storage array in his session, titled Hyperconvergence & the Death of the Storage Array, he said the same is not true of storage or storage people. IT professionals are caught up on a never-ending hamster wheel of painful upgrades and migrations. Simplified systems like hyperconvergence can help them "get off that hamster wheel and jump into the infinity pool," he said.

While simplified IT strikes some practitioners as a threat to their livelihoods, Miniman said fears of job loss are unfounded. "I have yet to talk to a hyperconverged systems customer that said they put the technology in and cut 20% of their staff," he said. Instead, administrator roles will change to allow staff more time for strategic development and less focus on maintenance. In fact, he cited a Nutanix user who told him that after deployment he had finally been able to get around to an important but oft-delayed security project.

Hyperconverged infrastructure is also attractive to some businesses, said Wahl, because IT is recovering from "serious black eyes." He cited the large outsourcing of everyday IT functions to managed service providers in the mid 2000s, followed by messy attempts to bring that technology back in house. Managed service providers can "eat your lunch" with high costs, long service delays, increased layers of complexity and reduced flexibility.

Hyperconvergence can help enterprises get back some control by managing the majority of day-to-day tasks in one stack, offloading firmware and software updates, and providing RESTful APIs to make building workflows simple and flexible, Wahl said.

Organizations can take advantage of hyperconvergence to change the attitude toward IT infrastructure from a cost center to an enabler of business, said Wahl, even with lean staffing. Rather than building infrastructure, IT teams can concentrate on deploying services that consume infrastructure.

That doesn't mean every business should implement hyperconvergence without performing serious due diligence to ensure it's appropriate. "It's not the best fit for every use case," said Wahl. "If a vendor tells you it is, please walk away."