This year has brought a slew of 802.11ac Wave 2 access points, all touting the promise of greater WLAN client density with Wave 2's multi-user MIMO technology. This week, Linksys joined the crowd, but with a different spin, promoting its 11ac Wave 2 AP as the first one designed for small and midsize businesses. While Linksys' slick new AP appears to be a value-packed powerhouse for the SMB, it's important to look at the practical side of Wave 2 in SMB environments.

The Linksys LAPAC2600 packs many of the same features as Wave 2 enterprise gear, but costs just under $500. As a 4x4 dual-band access point with MU-MIMO and beamforming, it hits the marks for “real wireless” specifications as spelled out in the 802.11ac standard. Linksys even joins the rest of the crowd in providing "controllerless" management of multiple APs, where a cluster of APs (up to 16 in this case) is managed through a single interface. It’s good stuff, but when we start talking big-league WLAN capabilities in the SMB space, customers need to keep their eyes and minds open to a number of realities.

Linksys is putting a lot of emphasis on the power of MU-MIMO to provide "optimal performance" for client devices. In a recent Network Computing blog post, Jason Hintersteiner  examined what it takes for MU-MIMO to deliver on its promises. Here's an executive summary: Many discreet factors have to line up just right for MU-MIMO to shine, and even then not all clients will benefit. End users need to know that vendors typically tout absolutely best-case scenarios with these Wave 2 products and not typical reality.

Linksys promises up to a theoretical 2.53 Gbps of throughput for the LAPAC2600, which is certainly respectable. But this is SMB gear, where traffic frequently heads to the Internet for an increasing number of cloud-hosted business and guest applications. In many ways, a wireless connection is often only as beefy as the ISP connection it connects to. There are still many enterprises that don’t measure their Internet pipes in Gbps, while small businesses tend to have much smaller pipes, so that 2.53 Gbps claim starts to sound funny in the SMB context. 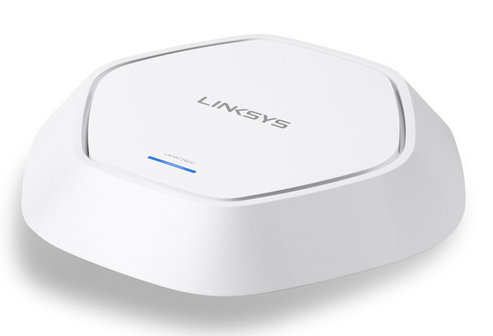 Moreover, keep in mind this is wireless; even with MU-MIMO, the AP is still a shared device that all connected users divvy up. Remember also that the uplink to this AP is 1 Gbps.  No matter how you slice it, nobody connected to Linksys’ new unit is going to see anything close to 2.53 Gbps. Kudos to Linksys to actually explaining this in a footnote in its announcement, as many vendors don’t qualify their bloated performance claims.

Now, back to the realities of MU-MIMO. Linksys implies that the LAPAC2600, as an SMB product, can make WiFi better just because it employs Wave 2 technologies. That’s true to a point, but the benefits can be negated by improper WLAN design. The paradox with equipment like the LAPAC2600? The low price is likely to hook the same customer base that may not want to invest in proper WLAN design.

A very small office with a single AP may get by without any design considerations, but expand this out to multiple APs in a bigger space, and professional design gets just as important with SMB gear as it does with enterprise-grade kit. Skip that design process in the name of “do it yourself- it’s SMB!” and you may end up wondering why performance is not living up to a vendor's promise.

Bottom line: Linksys has done well to create an SMB access point with decent specifications. But the fact that it has decent Wave 2 specs alone doesn’t negate the need to use it right in a properly designed WLAN.