Get Smarter About WiFi

WiFi has grown in leaps and bounds, and demand is increasing. Make sure your environment is ready.
Dirk Gates

Since the debut of the 802.11 standard in 1997, one thing has remained the same: wireless access points still take data off the air and put it on the wire. In other respects, the theme of WiFi's story is constant evolution -- in speed, spectrum, device types, power efficiency, and more.

From consumer technology to enterprise must-have

To get WiFi for your laptop in the 1990s, you had to order it as an option or plug in an adapter. Not until 2005 did most laptops include built-in WiFi in addition to an Ethernet port. The watershed came in 2007, when Apple introduced the iPhone. People wanted to use the native browser without racking up cellular minutes, and hotspots cropped up everywhere. The arrival of tablets in 2010 and the removal of the Ethernet port on many laptops starting in 2012 sped up the move to ubiquitous WiFi. According to Cisco's Visual Networking Index, in 2015, wireless device traffic will exceed wired traffic for the first time. WiFi has become a must-have in a bring-your-own-device (BYOD) world.

For many years, WiFi played catch-up with Ethernet speeds (see below). WiFi took the lead in 2013 when 802.11ac devices and access points started to hit the market. Running at up to 7Gbps, WiFi outstrips today's 1Gbps Ethernet -- and even the 2.5/5 Gbps Ethernet desktop connections on the horizon. In fact, Ethernet has become the slowest networking connection on new laptops and desktops, left in the dust not only by WiFi but also USB and Thunderbolt. The planned 802.11ax and 11ay standards support 30 to100 Gbps -- fast enough to download a full-length movie in a few seconds.

Fueling the explosion of wireless devices is the Internet of Things. Think wireless environmental sensors, streetlights, garbage containers, and all manner of building automation devices. Think sprinklers, cars, parking spaces, rail stress sensors, surveillance cameras, watches -- and things we've yet to think about. Analysts predict that machine-to-machine (M2M) connections will represent 43% of all Internet connections by 2019, and 90% of those connections will be wireless.

Just as no technology has unseated Ethernet to connect wired devices, it seems no technology will unseat WiFi to connect the Internet of Things. Emerging WiFi standards cater to IoT requirements: lower power, lower speeds, and longer range. For example, Super WiFi (802.11af) -- born when the FCC opened up the TV white space in between UHF and VHF (54MHz-790MHz) channels -- delivers speeds up to 500Mbps. In 2016, we expect ratification of the 802.11ah standard, which operates at 900 MHz with speeds of 150Kbps to 40Mbps.

WiFi technology is evolving to consume less power. High-speed 5GHz devices are now just as efficient as legacy 2.4GHz devices. And new 60GHz (WiGig) devices use no more power than 5GHz radios used 10 years ago. It's a safe bet that within five years, 60GHz devices will be just as power-efficient as today's 5GHz devices.

With growing numbers of devices competing for bandwidth, how can you make sure that critical traffic doesn't get stuck in a WiFi traffic jam, blocked by text messages and kitten videos? For example, during public safety incidents, streaming video from surveillance cameras needs higher priority than data from moisture-monitoring sensors in public parks. Advanced WiFi solutions can now place specified application traffic in the fast lane, using a technology called quality of service (QoS).

Some cellular operators are eyeing unlicensed 5GHz band for LTE (Long Term Evolution), a proposal called LTE-U (Unlicensed). All parties will need to cooperate to co-exist. If that doesn't come to pass, WiFi vendors will need to move on to the next chunk of clean spectrum: 60 GHz. WiFi has a nomadic tradition of picking up and moving to another band to deliver a better experience. 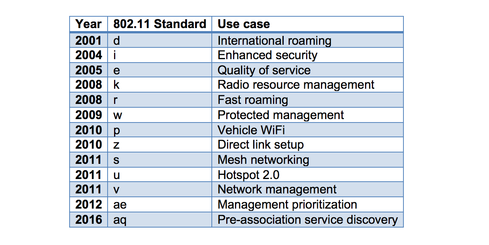 To prepare for the explosion in WiFi traffic, make sure your network can adapt for three trends: new standards, higher density, and more traffic per device. Beyond that, my best advice is to get smarter about WiFi. Educate yourself on what you'll need to deliver consistently excellent performance as more devices connect to your network and generate more traffic. In the Xirrus Where the Wires End survey, 84% of respondents said that bad WiFi kept them from doing their jobs. Start planning now to make sure that your people are among the productive 16%.