Dynamic Frequency Selection: Why It's Critical In 802.11ac

DFS is the focus of much debate in the wireless industry. Here's why it's a crucial requirement with the arrival of 802.11ac devices.
Jennifer Jabbusch

Dynamic Frequency Selection (DFS) has been a topic of debate among wireless vendors and implementers alike. DFS has been a consideration since the first 5GHz Wi-Fi standard, 802.11a. But now, the wider bandwidth channels used in 802.11ac compound the problems introduced by DFS.

In a three-part series, I'll examine DFS and the challenges it poses for wireless vendors and enterprises implementing 802.11ac. In this post, I'll explain DFS and its critical purpose in protecting mission-critical systems sensitive to RF interference from Wi-Fi and similar devices.

Dynamic Frequency Selection (DFS) is a mandate for radio systems operating in the 5GHz band to be outfitted with means to identify and take action to avoid other radio transmissions that are considered primary-use or mission-critical. These mission-critical devices are various flavors of radar systems used by specific industrial, federal civilian and military organizations.

In each country, there are local agencies that regulate the use of RF spectrum, but the DFS standard is an international requirement by the International Telecommunications Union (ITU), and if you make a commercial 5GHz product (such as 802.11ac access points), then incorporating and proving your DFS functionality is a pay-to-play.

[Enterprise WLANs are facing massive change with the arrival of certified 802.11ac products. Read how this is an opportunity to consider other vendors as you upgrade in "802.11ac: Time To Change Vendors?"]

If radar and RF are unfamiliar to you, then DFS may sound like a silly requirement at first. The reality is DFS serves a very important purpose because 802.11 wireless APs (or any RF emitters) have an immense negative impact on radar systems. It’s true that radar systems blast out signals on the scale of megawatts, but their strength in sending radio signals out is mirrored on the receiving side. Because of high-gain antennas on radars, they can “hear” and “see” RF disruptions at a great distance. 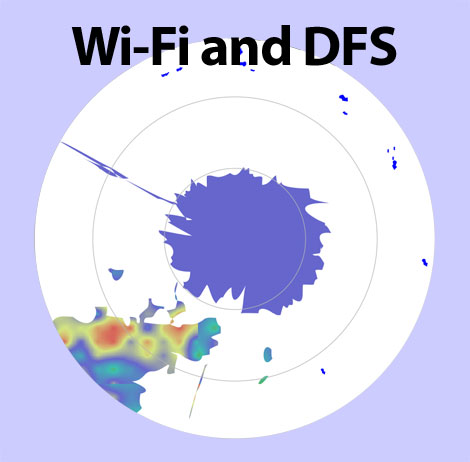 To visualize the effect, think about a typical scene in a WWII movie. The Allied forces are tracking activity over a controller air space. The radar moves in a circular pulse across the screen, and when that German He 111 enters the area, it’s immediately visible as a splotch on the radar screen; P-38s are dispatched to intercept the enemy forces. If our Allied friends working the radar happened to be anywhere near 802.11ac at the time, instead of seeing the enemy aircraft, they may have seen giant areas of disturbances, similar to a strange weather pattern across part of the screen.

Radar sends out a blast of radio waves that bounce off objects and return to the sensors. When RF signals from Wi-Fi hit the same sensors, the radar can’t distinguish them from the waves it sent out. Instead, the radar thinks the Wi-Fi’s radio waves are its own waves bouncing back and interprets them as solid objects.

You may be thinking, “But really, how many businesses are near radar?” and probably telling yourself “not many.” The definition of “near” is complex; standards define a few miles as being “in very close proximity” and the DFS documents reference specific requirements for anything within 35km (21 miles) of Doppler Radar (TDWR) locations. Radar systems protected by the DFS standard come in many forms, including radar on boats, radars for TV weather stations, and military radars.

In my next article, I'll examine the challenges in meeting DFS requirements in 802.11ac wireless systems. Although the Federal Communications Commission is considering opening additional bandwidth in the 5GHz space, those new channels will have the same DFS requirements in the currently allocated U-NII bands.