Public cloud adoption is on the rise in the enterprise, but companies are still investing in IT infrastructure and Cisco remained the top supplier in 2017, according to a new report from Synergy Research Group.

The report, which looks at vendor revenue for the last four quarters, shows that annual spending on enterprise infrastructure worldwide grew by nearly 3% compared to 2016, reaching $113 billion. Data center servers, the largest segment of the infrastructure market that Synergy tracks, declined 1%. However, the second-largest segment -- switches and routers -- grew 4% last year, according to Synergy. Hosted and cloud collaboration grew the most. 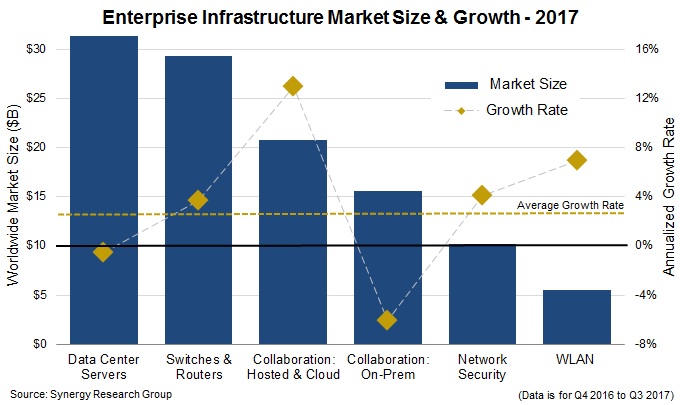 Cisco was the market leader in four of the six market segments: switches and routers, network security, WLAN, and on-premises collaboration. The company's total market share across all six segments in 2017 was 26%, a bit down from 2016, but still more than double the size of its closest competitor, Hewlett Packard Enterprise, Synergy analysts said.

Microsoft led the hosted and cloud collaboration segment, where Cisco was ranked second.

“Despite a burgeoning public cloud market, enterprise IT infrastructure spending was still on the rise in 2017 and will be for the next five years,” Synergy Research Group founder and Chief Analyst Jeremy Duke, said in a statement. “The focus of that spending is changing, however, with a growing emphasis on hosted solutions, subscription-based business models and emerging technologies. Those changes will continue to present challenges for incumbent vendors and opportunities for new market entrants.”