There's a common misconception that a plan to open up more unlicensed, unmanaged spectrum will mean free Wi-Fi for all. Expect a lot of wonderful things, including competition for cellular carriers, but not for free.
Larry Seltzer

Wouldn't it be great if wireless Internet access were free? Speculation erupted earlier this week that a proposal by FCC Chairman Julius Genachowski to open up high-quality RF spectrum for unmanaged, unlicensed use would somehow lead to free Wi-Fi for all.

Sorry, but it's not going to happen. A report in Sunday's Washington Post about industry attitudes and lobbying on the proposal slips into this misconception at times, equating unlicensed, unmanaged spectrum with "free-Wi-Fi." But even though anyone can put up a wireless access point, that doesn't give them access to the Internet.

But just because we're not getting free wireless, it shouldn't detract from Chairman Genachowski's proposal. When the FCC opened up spectrum in in the 80s, it led to the development of many kinds of new products--Wi-Fi being perhaps the most significant.

If the chairman's plan is executed, commercial entities will try to build new services on it. For example, if Internet service in this spectrum is fast and reliable, some people will choose it for home Internet access and dump their cable or FiOS.

[ Join us at Interop Las Vegas for access to 125+ IT sessions and 300+ exhibiting companies. Register today! ]

It's even possible, as BYTE's Serdar Yegulalp speculates, that services of high enough quality will develop that users will no longer need expensive cellular data plans and just use VoIP for making phone calls. After all, if you can always get Wi-Fi or the equivalent, and some sort of hand-off mechanism is developed so that you can maintain a VoIP call as you roam from hot spot to hot spot, who needs LTE anymore?

There are plenty of reasons why this would be very hard to do, but that's no reason not to try. I don't know about you, but if SS7-based telephony is displaced by less-expensive technologies, I won't shed a tear for the carriers. But the one thing I definitely don't expect is free Wi-Fi.

But even if the federal government isn't going to bring free wireless to all, there are still local and corporate efforts afoot. For instance, in July 2012, New York City announced a pilot program that offers free Wi-Fi at payphone kiosks. The pilot included 10 locations throughout the five boroughs. Then there's Google, which offers free Wi-Fi to Google account holders in Mountain View, Calif. And this January the search giant also launched free Wi-Fi in the Chelsea neighborhood of Manhattan, the home of Google's New York headquarters. 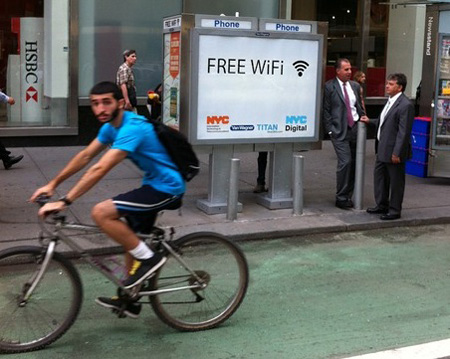 However, many efforts to bring free Wi-Fi to the public fail. And none failed bigger than Wireless Philadelphia. This organization sought to wire the entire city for Wi-Fi and subsidize the service, especially for the low-income residents. It also sought to subsidize computers for low-income residents. Philly is a large city with many residents who would qualify for the subsidies; the project's planners never bothered to think through how they could possibly pay for such an ambitious project. Before too long it became clear that they couldn't.

Wireless Philadelphia struggled for a while and after a few years it finally dropped dead and the city bought out the remainder of its assets for pennies on the dollar. The fundamental problem with Wireless Philadelphia and other free Wi-Fi schemes is that it was not a commercial entity and had no mission to get a service to people who wanted that service. Rather, their mission was to pursue certain political goals no matter what they cost or whether there was any actual demand for the services.

It may be that Internet users have become so accustomed to getting content for free that they now expect the same of Internet access. Keep dreaming.