As expected, Cisco Chief Strategy and Technology Officer Padmasree Warrior is leaving the company. Re/code reported her departure earlier this week. She will remain as an advisor through the transition, Cisco said.

Edzard Overbeek, senior VP of Cisco services, also is leaving Cisco, but will serve as an advisor during the transition. Wim Elfrink, Cisco's globalization officer since 2006, will retire July 25.

On Monday, Cisco said President of Sales and Development Rob Lloyd and President and COO Gary Moore will step down July 25, a day before Robbins replaces longtime Cisco CEO John Chambers. Robbins was named as Chambers' successor a month ago.

Rebecca Jacoby, formerly Cisco's CIO, will serve as senior VP of operations, and Chris Dedicoat, who has been with Cisco since 1995 and headed its EMEAR group, will be senior VP of worldwide sales.

One of the members of Robbins' team, Ruba Borno, comes from outside Cisco. Borno, who will serve as VP of growth initiatives and as chief of staff, worked as a principal at The Boston Consulting Group. She has a Ph.D. in electrical engineering.

See the infographic below from Cisco for details on the new executive team: 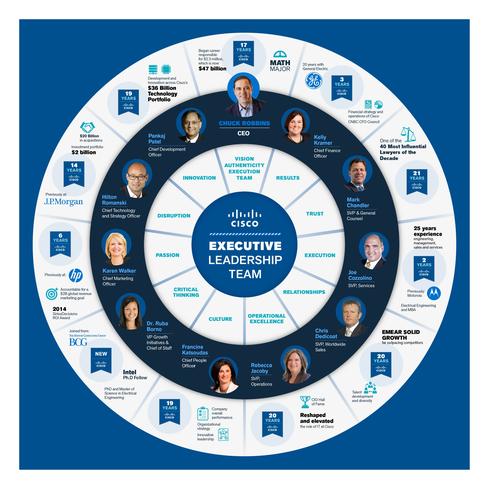