Networking Pros: Get Out of Your Comfort Zone

Anyone who works in the networking field knows the job isn't getting any easier. On top of keeping up with growing connectivity demands and maintaining uptime, emerging technologies like network virtualization and automation are adding new layers of complexity.

So how do you manage a networking career today? How to you ensure you remain relevant? A panel of networking pros shared tips and advice for their colleagues during the Network Transformation Summit earlier this week at Interop ITX.

With all the change that's happening in enterprise IT, networking professionals can't afford to sit still, panelists agreed. They need to expand beyond their specialty and learn about new technologies and develop new skills.

"The future is always learning. Sometimes you have to learn things you're not good at. That's okay," said Charis Mayhorn, network architect at Discovery Inc.

Jordan Martin, a technical architect at Core BTS and co-founder of the Network Collective podcast, also emphasized the importance of learning. "Networking hasn't changed for a very long time, now we're trying to catch up... Our cohorts on the server teams have learned about virtualization, overlays, and abstraction," he said.

And while networking pros have always needed some knowledge about programming, it's becoming more of a job requirement, Martin said. 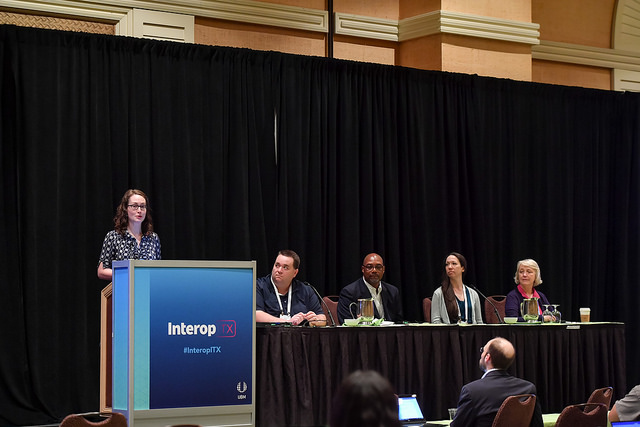 Kenneth Barneys, infrastructure operations manager at New York University, told attendees to not restrict themselves to networking and urged them to get involved in other projects. What he enjoys most about his job is being able to do something different all the time, with each day a challenge.

"Being well-rounded in the best attribute you can have," he said. "Don't lock yourself into one specific discipline. You want to be able to do a lot of things."

Panelists recommended a variety of ways to learn new skills, including mentors, books, certifications, and podcasts. Denise Donohue, network architect at consulting firm NetCraftsmen, said certifications help get you in the door during job hunts, and also force you to learn.

Getting involved in the networking community is also important for career advancement, panelists said. "Make sure you're engaged on some social platform," said Amy Lewis, director of influencer marketing at VMware who is well-known on Twitter as CommsNinja. "It's great to have that network. Make sure you're talking to people outside your company."

Martin said he's been on Twitter for eight years. "Developing a network of peers changed the trajectory of my career," he said.

Donohue suggested getting to know people at conferences and following up with folks on social networks like Twitter. "Be like an octopus, put your tentacles out." And don't be shy to ask others for help, Donohue advised: "I'm an introvert. I hate to approach people. For me, it was about getting out of my comfort zone and figuring out who to ask to help me with something. It's fine; they don't mind."

Community is particularly important for those who work in small shops handling everything IT in order to expand their scope, Martin said. "Learn the stuff you don't deal with on a day-to-day basis,," he said. "Working in a small business locks you into that environment."

When considering candidates for job openings, Barneys said he looks for energetic people who are willing to ask questions and don’t act like they already know everything. Donohue agreed. If a candidate's current job involves implementing configurations designed by others, she wants to see if that person has broader knowledge beyond his or her job description. "I want to see that you have learned new stuff," she said.