Learn about the different types of cables and where they work best in the enterprise.
Andrew Froehlich

Part of any network engineer's job is to understand network cabling: the different types available, their capabilities and optimal use cases. While cabling tends to last through several generations of hardware refreshes, it does evolve slowly over time. In this article, I'll cover some of the most common network cabling types in the enterprise and explain why one cabling type might be preferred over another in certain deployment scenarios.

Copper cabling is the most widely used Ethernet transport medium on enterprise networks. A single Ethernet cable consists of eight wires that are tightly twisted around one another. This helps the electronic signals maintain consistency while traveling the length of the cable. Copper Ethernet uses RJ45 almost exclusively for connecting into network cards, routers, switches and any other copper Ethernet-capable devices.

Copper cables are available either as shielded twisted pair (STP) cabling or unshielded twisted pair (UTP) cabling. You'll likely find STP cabling in areas where there is high electromagnetic interference such as in manufacturing plants with large pieces of equipment. But UTP cabling is more common because it's cheaper, more pliable, and kink resistant compared to STP. 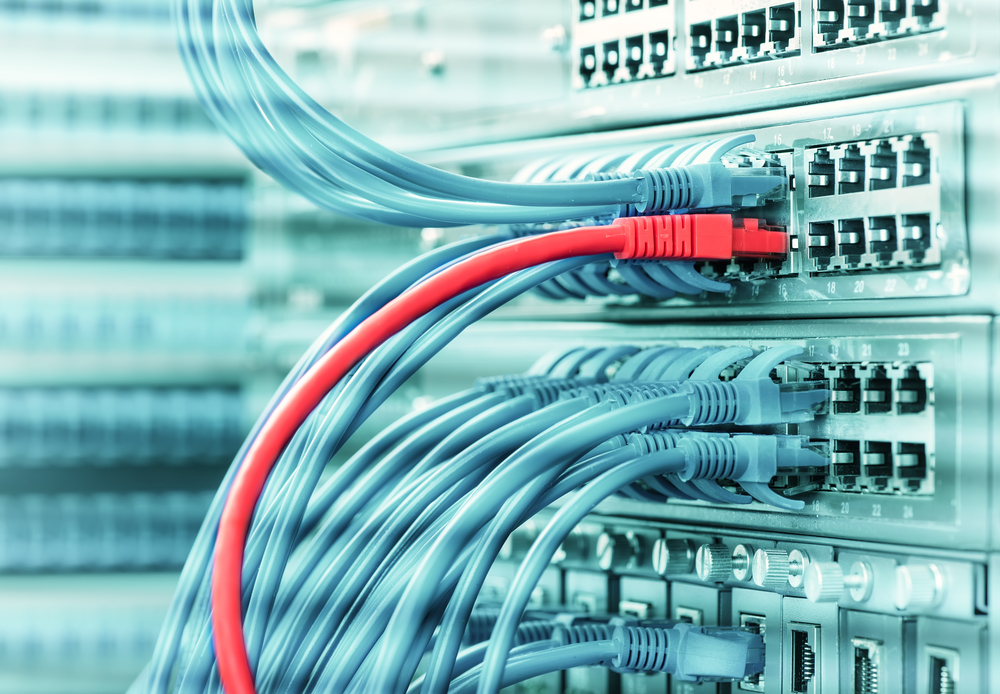 Copper cables also have different category  ratings. A category rating is a TIA/EIA-586 standard that determines the data rates and distances that Ethernet can operate over the cable reliably. Common standards  include Cat5, Cat5e, Cat6 and Cat6A. It's critical you know the category of your entire cable plant when performing network upgrades. For example, Cat5 cabling can operate at gigabit Ethernet speeds. But in order to take advantage of new multi-gigabit standards such as NBASE-T, you'll need to operate over Cat5e cabling or higher. Moving up to 10G over copper, Cat5e won’t cut it. It's at that point where you need to re-cable to Cat6 or higher.

Fiber optic cabling differs from copper because it uses light beams for data transport instead of electrical signals. Because of this, fiber can often operate at greater distances and is far less prone to electromagnetic interference. Fiber cabling is also much smaller in diameter. This can be a huge benefit in terms of space saving if you're pulling large numbers of cable bundles inside cable trays and through ceilings and floors

There are two primary types of fiber optic cabling: multimode and single mode. Multimode fiber (MMF) cabling uses multiple strands of glass or plastic inside each cable. This is done to allow the cable to be more pliable while still being able to reliably transport signal from one end of the cable to the next. Multimode fiber for Ethernet transport comes in two different core sizes, 50 and 62.5 micron. MMF cabling is most commonly used for shorter distance runs between switch uplinks and from switches to servers, storage and other infrastructure hardware that uses fiber-capable network cards.

Single mode fiber (SMF) uses a single strand of glass as its transport medium. SMF can transport data over much longer distances and at higher rates of speed. The reason for this is that the smaller core forces the light beam to travel in a much straighter trajectory compared to larger MMF cores, which allow the light beam to bounce around.

Fiber comes with optical multi-mode (OM) ratings. The OM rating is an ISO 11801 standard that determines the maximum Ethernet speeds and distances the fiber cable can transmit and receive. OM1 and OM2 cables are the oldest and can transport gigabit Ethernet nearly 300 meters using 1000BASE-SX transceivers. If you are running 10GbE or higher transceivers,  you’ll want to upgrade to OM3 and OM4 rated cabling. These cables are laser optimized and can push 100 GbE 100 meters or more.

There are many fiber connector types, including FC, ST, SC and MT-RJ. The most commonly used fiber connector used today is the LC connector. Inside the data center, you may run across a cable that has a single connector on one side with four connectors on the other. This is often referred to as an “octopus” cable. This cable is responsible for taking a 40GBASE QSFP+ connection and splitting it into 4-SFP+ connections that operate at 10Gbps.

The last cabling type networking pros should know about is the twinaxial, or twinax cable. This cable looks like a coax cable that you use for cable television, but in the data center, twinax cabling is a popular choice for very short 10 and 40GbE terminations due to its low-latency capabilities and low cost.

Most twinax cabling that you are likely to come across are known as Direct Attach Copper (DAC) cables. These cables come with transceivers that connect directly into an SFP+ or QSFP+ port. A 10GbE passive DAC can operate at distances up to 30 feet. A passive DAC running 40GbE on QSFP+ interfaces can reach distances up to 15 feet. Similar to fiber optic octopus cables, there are QSFP+ to SFP+ breakout cables in a DAC form factor.