Loadmaster Exchange appliance features a SMB-friendly price point for firms trying to manage server traffic due to the proliferation of Web and other applications.
Kevin Casey 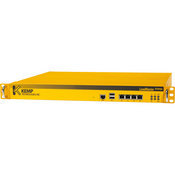 Kemp Technologies has launched a load balancer appliance optimized for Exchange 2010 and aimed at the small and midsize business (SMB) market.

Loadmaster Exchange, the newest member of Kemp's load balancing and application delivery control appliances, is designed to support network traffic management for up to 250 users. While SMBs might drive IT consumerization when it matches their budget considerations and use cases, Kemp has waded in from the other end of the pool, offering SMBs access to the appliances that were once the domain of the large enterprises that could afford them.

Peter Melerud, Kemp's VP of product management, said the company saw an increasing need for businesses to actively manage traffic across servers, particularly with the rise of Web applications. Kemp has tailored its product development strategy around the concept of the affordable load balancer. It launched its first appliance in 2003 and has roughly 7,000 units in production worldwide, according to Melerud. With a price tag of $1,590, which includes one year of maintenance and support, the Loadmaster Exchange joins the vendor's lineup of comparable appliances aimed at knocking down cost as a barrier to entry.

That said, Melerud noted a more recent, unintended market trend: Since the start of 2009, Kemp has seen increased interest in its appliances from larger companies. "We think it's mostly economically driven," Melerud said. "If you have a requirement for load balancing and you need to refresh your technology or renew a support contract, you say: 'Oh gosh, this is really expensive. Our budgets are reduced, but we still need to do something. Let's see what else is there.'"

While Kemp remains committed to the SMB segment, Melerud notes that -- in terms of product development and deployment -- the number of servers a business runs will outweigh its number of employees in best determining size. "You may have a very large company that decides they want to carve out this particular application and put it on two servers -- that would be a small business or SMB for us," Melerud said. "By the same token, you may have a very small business in terms of number of users, but because of their business type they may have literally hundreds of servers behind one or two applications."

The Loadmaster Exchange can support six physical servers and 13 virtual services. On the performance side of the equation, the appliance boasts up to 920 Mbps of layer-seven throughput and 25,000 L7
connections per second, plus SSL offload of up to 200 transactions per second. Kemp stresses simplicity as a core part of its marketing pitch -- to that end, the appliance is pre-configured for the most common Exchange 2010 deployments, with support for Outlook Web Access, Outlook Anywhere, and ActiveSync. Melerud said that key changes that Microsoft made with Exchange 2010 made it a natural fit for Kemp's recent focus on specific applications. He gave client access server roles as one example, noting that Microsoft's network load balancing (NLB) can't manage multiple roles on the same server with Exchange 2010.

"You can no longer use Microsoft's NLB, because NLB and clustering does not work on the same server," Melerud said. The Loadmaster Exchange appliance is Microsoft-certified. "Microsoft realized that early on and they chose to partner with hardware load balancing vendors to deliver a solution to the Exchange 2010 market."