Four years since World IPv6 Launch, the long-term global internet transition to IPv6 is well underway and increasingly entering the mainstream. The American Registry for Internet Numbers (ARIN)  exhausted its free pool of IPv4 addresses in September, following all of the other registries except for Africa’s AFRINIC, which is on track to exhaust its IPv4 free pool in 2018. The result is that businesses and service providers needing internet addresses for their mobile users, broadband users, business offices, servers, or cloud infrastructure now need to purchase IPv4 addresses on a transfer market, use IPv4 NAT with corresponding costs and complexity, or make a strategic decision to leverage IPv6.

Akamai continues to see major movements in deploying IPv6, especially by many of the top networks and content providers in the world. We are also starting to see areas, such as mobile networks in the US, where IPv6 is starting to be both widely deployed and outperforming IPv4. Taken together, IPv6 deployment is moving out of its infancy and into a stage where increased network and content deployments will reinforce each other. While IPv4 will persist for many years, we are now in a stage where it makes sense to routinely deploy IPv6 alongside IPv4. There are even scenarios now where deploying IPv6-only is a viable option for infrastructure simplification.

Akamai continues to work with our network partners to expand our deployment of IPv6 and, as of this month, we now have IPv6 live on Akamai servers in 105 countries, more than 550 cities, and 700 network providers. While web properties with IPv6+IPv4 have remained opt-in for most Akamai products, we’ve seen a significant number of customers offer their content on both IPv4 and IPv6 -- so-called “dual-stacking” -- especially for some of our highest request-volume sites.

With IPv6 now mainstream for many end-user networks, we will switch to dual-stack as the default for client-to-edge delivery for new sites provisioned onto many of our web products, with additional media and security products supporting dual-stack today, and defaulting to this configuration in the coming months. IPv4-only delivery will be an option for customers who opt-out for one reason or another, such as for back-end origin infrastructure that handles IP addresses as data and does not yet support IPv6 addresses in request headers or delivered logs. However, making more content available over IPv6 now will improve site performance in some situations -- such as mobile networks in the US -- as well as reduce load on bottleneck links and infrastructure like NATs that serve users not yet upgraded to IPv6. 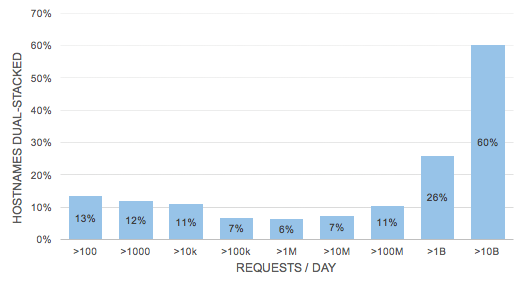 There is already significant IPv6-accessible content on Akamai and has been for a few quite some time. Among the hundreds of customer hostnames serving over a billion HTTP(S) requests per day, over a quarter are dual-stacked. We also have significant usage of IPv6 in the hundreds of thousands of sites we deliver with under 100K requests per day; more than 10% of those are dual-stacked. The latter is partly due to a number of delivery partners, resellers, and SaaS providers dual-stacking their content through Akamai by default.

Having an increasing amount of content available via IPv6 also is likely to motivate even more ISPs and businesses to hasten IPv6 deployment, especially when doing so can help offload their IPv4 NAT infrastructure.

We continue to see growth in end-user IPv6 deployment worldwide, especially by some of the largest ISPs in the world. A primary way we measure end-user IPv6 adoption is by looking at the percentage of requests that arrive at dual-stacked customer sites over IPv6, also as reported in our State of the Internet IPv6 adoption visualization. By this metric, IPv6 adoption in many countries is growing steadily, with the US, Germany, Belgium, Switzerland, and Greece all above 20%, and a number of others such as Malaysia, Ecuador, Portugal, and Peru close behind.

Significant IPv6 deployments by large network operators in Brazil, Australia, the United Kingdom, and Canada have also started or accelerated in the past year, with all of them now above 5%. Japan and France have seen continued growth and are both nearing 10%. At the other end of the spectrum (and within top world economies), we still see very limited end-user usage of IPv6 from India, China, Russia, Italy, Spain, and Mexico, with all of them remaining well below 2%.

The country and regional adoption continues to be driven heavily by the efforts of individual networks, with some of the largest network providers being farthest along in their IPv6 deployments. Of the top five network providers by traffic volume, all but one have IPv6 adoption over 20% and the remaining network has announced that it will be starting its rollout later this year. Of our top 25 networks by volume, 14 have IPv6 adoption over 10% and a few more have started or are planning rollouts in the near future. Looking at our top 100 networks by volume, around a third have started rolling out IPv6 and are past 2%; a quarter are past 10%. 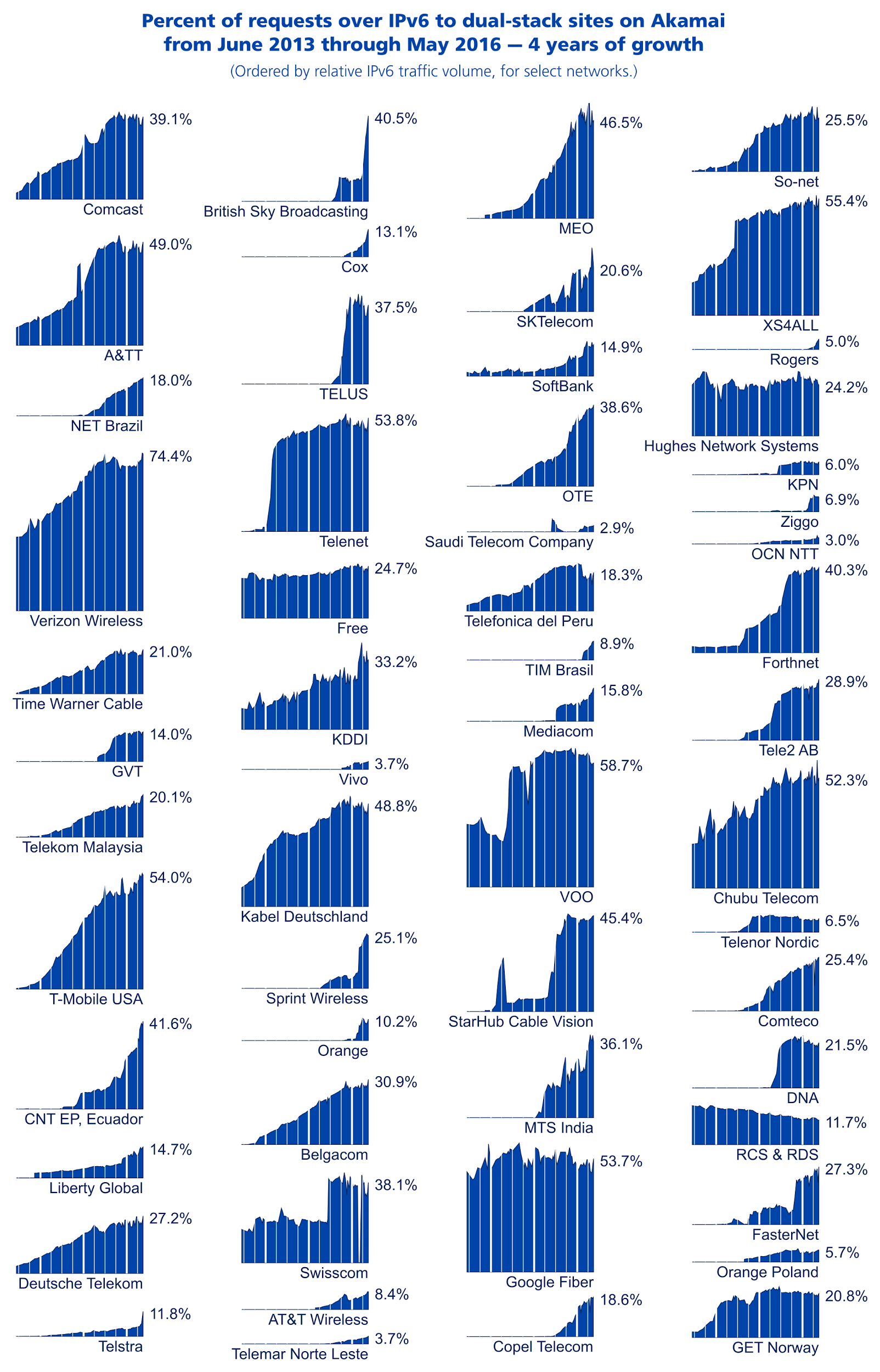 Note that this way of measuring IPv6 adoption -- looking at the percentage of requests arriving at dual-stacked sites over IPv6 -- is highly sensitive to the mixture of content and client devices. In particular, we have noticed that our IPv6 adoption measurements in some countries and networks, including the US, are pulled down by some consumer electronics such as streaming media consoles and smart TVs that are not IPv6-ready, as well as older operating systems. For example, IPv6 adoption in the US has a country-wide average around 20%, but is over 28% when measured across Windows 10 and Mac OS X El Capitan clients, and 33% when measured across iOS 9 and Android 5/6.

Another way we measure IPv6 deployment is to count the total number of client addresses and networks that touch our platform on a daily, weekly, and monthly basis. In 2016, we see more than 5,000 client networks and 500 million client IPv6 addresses accessing Akamai-delivered web content per day, nearly 3 billion IPv6 addresses per week, and more than 10 billion IPv6 addresses per month.  Primarily due to IPv6 privacy addressing features, none of these numbers are an estimate of user count, but they do jibe with other measurements that suggest about 10% of internet users worldwide have IPv6today.

With the highly limited availability of IPv4 address space and the complexity of running IPv4 and IPv6 side-by-side, an increasing number of businesses are looking at ways to accelerate the path to IPv6-only environments. In this way, IPv6 can be used to solve real-world business problems. One challenge here is the number of Internet resources that are still IPv4-only, requiring many IPv6 "only" environments to still provide "IPv4 as a service" over IPv6 while in-parallel looking to drive down the amount of IPv4 traffic.

Hacking around IPv4 exhaustion is challenging. There are only 16.8 million IPv4 addresses in the RFC1918 private address spaces. This means that ISPs and enterprises that have, or plan to have, millions of subscribers or devices need to reuse the same addresses in different parts of their network, with careful partitioning and NAT between them. This also makes combining multiple networks during acquisitions very challenging. Using IPv6 enables a single flat routable address space across all devices and subscribers and enables much more deterministic ways of managing devices and subscribers.

Next year will be the fifth anniversary of World IPv6 Launch, and it's almost certain that even then we will still have a long way to go on the path of migrating the Internet from IPv4 to IPv6. However, as IPv6 increasingly becomes mainstream, it will be in our best interest to move the migration along as fast as possible to reduce the amount of time where both IPv4 and IPv6 simultaneously exist with the resultant complexity. When building out and deploying new services, sites, and applications it certainly makes sense now to support both IPv4 and IPv6. It's even starting to look attractive in some scenarios to consider implementing new infrastructure as IPv6 only from the start.

Erik Nygren is an Akamai Fellow and chief architect in Akamai's Platform Infrastructure Engineering organization and has been with Akamai since June of 1999.  Among other responsibilities, Erik is leading the platform architecture for Akamai's IPv6 initiative. He is a long-time member and current chair of Akamai's Architecture Group and has had deep involvement in many engineering and operations areas across Akamai for close to 17 years.  Erik received his bachelor's and master's degrees in computer science and engineering at MIT, and came to Akamai part way through his PhD program at MIT, working in the Parallel and Distributed Operating Systems group.  Previously, Erik was a co-founder of Fourth Planet, a data visualization company, and worked in the Intelligent Mechanisms group at NASA Ames Research Center.