The Future Of Networking Is Watson

Forget SDN. IBM's cognitive system demonstrates the power of artificial intelligence, which will run our networks and transform IT management.
Patrick Hubbard

Watching Watson wipe the smug off Ken Jennings' face in front of Alex Trebek and a room full of IBMers in Yorktown Heights was a great day for geeks. It seemed that intelligence itself could be summoned from the ether by technologists. IBM created not a new flavor of supercomputing, but marketable cognition and is bringing it to new applications. And as a network administrator, I see that victory as making one thing clear: Cognitive systems will ultimately control not just our networks, but the entire software-defined infrastructure.

Unlike poker systems that are computational wunderkinder, the AI pokerbot does not brute force compute every possible play from a given state then select the most likely winning play. That works in chess because a machine can see all the pieces of both players, but in poker it’s not an option; critical information is missing. Instead, Dahl’s pokerbot  played billions of hands of Hold ‘Em observed by a neural network.

Over time, it observed play with multiple neural networks, each with algorithms developed to optimize a particular strategy: defensive play, winnings maximization or even engaging play to keep players at the machine longer. On its own, it developed human strategies like floating --passive play to build bigger pots. The initial result was a winning machine that was no fun to play and bad for business. They settled on the more engaging defensive neural-net play strategy.

If you’re in the middle of untangling less-than-optimal telepresence quality of service (QoS) class maps, you’re well aware that network hardware has zero intelligence, and firewalls may actually have negative intelligence. You make the network go; your hardware is smart as a shovel. You can make it a steam shovel with automation, but its work will only be as skilled as you and what you explicitly taught it to do.

But real machine intelligence does something different. Because it learns on its own, it’s capable of developing abilities beyond the reach of its human operator. IT administrators of the future won’t think of AI and neural networks; they’ll leave that to vendors like IBM and its partners.

We’ll simply think of intelligent machines --boxes with software that we trust to control infrastructure --and machine learning, the way we coach these systems and respond to their queries. Forget everything you know about Cisco IOS configurations, managing VMware NSX topology overlays with vCenter or even defining software defined networking (SDN) resources for Open Stack or CoreOS. Machines with mystifying, spooky instincts will make demonstrably better decisions faster.

In the Texas Hold ‘Em example, the learning pokerbot is to computational pokerbots as IBM Watson is to IBM Deep Blue. Watson’s defeat of Jennings was a watershed event. Unlike Deep Blue, which was an amazing chess playing exercise in POWERparallel and custom VLSI chess chip thunder, Watson was a learning machine built with off-the-shelf POWER7 hardware.

Watson had only four terabytes of data and no link to the Internet, but it was blessed by IBM with machine instruction, and instead of teaching it facts, they taught it how to learn facts, how to understand Jeopardy’s answer-question format and natural language processing. They gave it a dump of Wikipedia and let it build intelligent links through neural net processing. The result? Watson succeeded by sidestepping the hardware limitations of the compute approach.

With Watson, IBM created cognitive systems and underlying algorithm technology to “observe, interpret, evaluate and decide.” It was vastly different than traditional supercomputing.

IBM can’t possess infinite domain expertise, so it’s expanding an innovation partner network to build a Watson technology ecosystem. Watson will be applied in security, medicine, banking and network and application management in ways we can’t imagine, not by IBM, but by domain experts who use Watson as a platform or service. And when we start talking about consuming AI as a service, you can see the writing on the wall for traditional IT management approaches.

For background, IBM referred me to SparkCognition in Austin, Tex. as an example of AI IT management, in this case, network security.

“The genesis of SDN really comes from active networks and the large telcos and routing companies who wanted to make fabric more intelligent,” SparkCognition’s founder and CEO Amir Husain told me. “SDN is essentially a very high-speed, responsive fabric that removes physical equipment barriers and enables next generation IT. The speed of SDN is of itself critical for integration with self-managing, cognitive management systems. Fabric must morph very rapidly in response to knowledge accumulation and decision making happening at a higher cognitive layer. Legacy networks can’t benefit from the decision making happing at that layer.”

According to Husain, Watson is particularly useful for suggesting meaning in unique situations with incomplete information.

“We’re moving to a signature-free security model, where cognitive algorithms complement and eventually play the role of a human security researcher,” he added. “We combine our research and algorithms with neural net processing analysis provided by Watson to be aware of the present, and apply learning and domain knowledge where Watson lets us draw new conclusions even when looking at weirdness.  Humans are unfortunately slaves to intuition largely for self-preservation while algorithms are not.”

And it’s that freedom of algorithms to move past human assumption bias that gives cognitive systems an edge over humans when analyzing behavioral data at vast scale. Perhaps you’ve felt this effect if you’ve ever looked at Google’s AI “Deep Dreams” images. 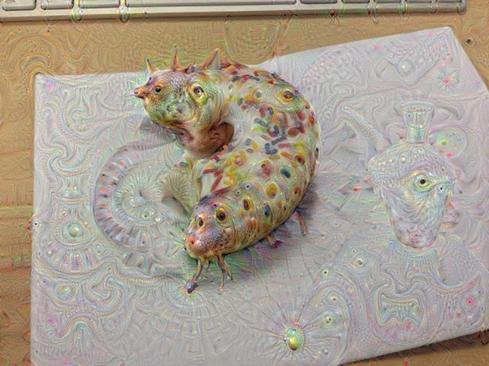 There’s something really creepy about a machine seeing alien slugs in delicious doughnuts because our minds severely limit our willingness to find new meaning in routine details. There are many psychophysiological drivers of this, including that our vision is a virtual construct to overcome our blind spot and to highlight survival value clues to decrease reaction time. But (proper) algorithms of cognitive machines don’t have bias, bad habits, feel creeped out or get bored -- all of which weaken IT admin performance.