Ethernet Switch Market on a Roll

Sales of Ethernet switches are surging, buoyed by network upgrades in both the campus and data center, according to market researchers.
Network Computing Editors

The Ethernet switch market is having a good year so far, and analysts say the outlook is healthy as enterprises and service providers continue to invest in network upgrades.

Worldwide sales of Ethernet switches totaled $6.1 billion in the first quarter of this year, a 12% increase on a year-over-year basis, according to a report released Thursday by IHS Markit. Sequentially, revenue was down 10% due to seasonal slowdown in demand, but long-term growth prospects are good, the firm said.

The momentum the Ethernet switch market gained in 2017, when it experienced the most growth in seven years since the depths of the global recession, is continuing this year, analysts said. They attributed the growth to continued data center upgrades and expansion, along with rising enterprise demand for campus networking equipment due to better economic conditions.

Ethernet switch sales for market leader Cisco grew 7% in the first quarter on a year-over-year basis, according to IHS. Sales for Huawei rose 43% while Arista Networks experienced a 40% increase year over year. 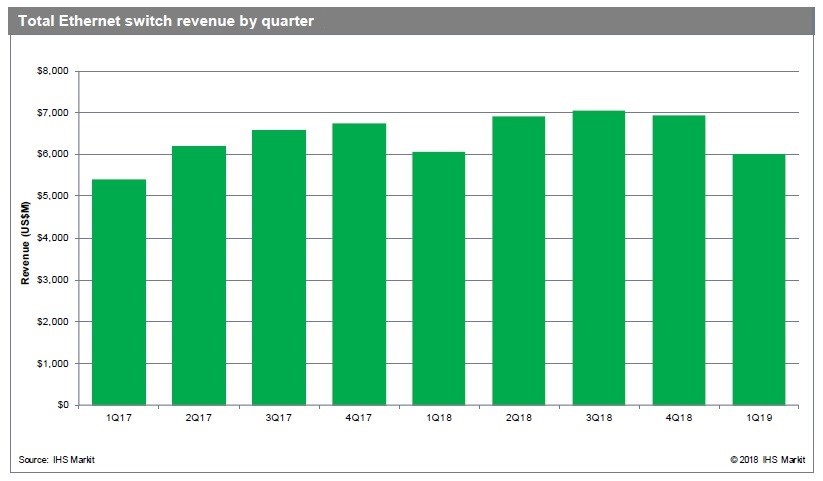 "After modest gains in 2017, the Ethernet switch market started 2018 with a strong first quarter," Rohit Mehra, VP of network infrastructure at IDC, said in a statement. "There are two macro trends that contributed to growth: The emergence of next-generation software-based network intelligence platforms that add to the intrinsic value of networking, and the push by large enterprises, hyperscalers, and service providers to leverage faster Ethernet switching speeds for cloud rollouts. Both trends bode well for this industry moving forward."