Ethernet Standards Ramp Up For Faster IT

"Fast IT" has become a marketing slogan, and is also a very real challenge for today's IT professionals. But rolling out new applications on the fly, providing continuous improvement, and adapting to changes and feedback in real time can only happen if your basic IT infrastructure is extremely sound.

In pursuit of this robust architecture, the Ethernet Alliance held its largest plugfest to date at the University of New Hampshire InterOperability Laboratory (UNH-IOL), last week. Engineers from 23 companies in the networking ecosystem -- including Arista, Cisco, Dell, Hitachi, and Intel -- gathered at the UNH-IOL’s 32,000-square-foot facility to work the kinks out of their 40 and 100 Gigabit Ethernet (GbE) technologies and to provide input into the developing standard for 25 GbE.

"Customers and vendors are telling us they need to move faster," John D’Ambrosia, chairman of the Ethernet Alliance and chief Ethernet evangelist at Dell, explained to me at the event. "We have to keep figuring out how to move the standards development as fast as we can and leverage these technologies quickly, because there are so many new things coming."

It's helpful that Ethernet specifications are similar and often build on one another. But, there is a growing demand for specifications that are tailored to specific application areas, like data centers, ISPs, storage, and the automotive industry, according to Jeff Lapak, associate director at the UNH-IOL. "With each faster speed there are more and more different flavors. They're all a little different, but the strength of Ethernet is that the core of it is always the same."

That solid core will help in the deployment of emerging technologies. SDN and virtualized applications put even more connections on a typical Ethernet network, making the physical infrastructure even more valuable, said D’Ambrosia. "There's tons of innovation happening in networking right now, there's no doubt about that. But, you still need to be able to connect between points, and unless you can do that, the other stuff isn't sound."

Lapak added that the trend toward white-box switching is putting additional pressure on the Ethernet space. "There's a lot of talk about lowering cost and commoditizing the Ethernet chunk," he said. The ability to use generic white-box solutions from different vendors, make them all work together, and provide them at a low price demands a very high level of consistency in the products available.

That's what the plugfest is all about -- making sure that products can plug and play in real-world scenarios. "Things are often possible in demonstrations and hero experiments. Standards are not hero experiments," D'Ambrosia said. The plugfest provides a rigorous environment for testing 40 and 100 GbE operation over hundreds of different scenarios on both copper and fiber. The UNH-IOL expected to have completed 10,000 different tests by the end of the week, producing a wealth of data that will take at least a month to process and evaluate.

Although the standard for 40 and 100 GbE was ratified in 2010, comprehensive interoperability testing had not taken place before. D'Ambrosia said increased deployment is creating an urgency to ensure that products from different vendors will work as advertised. 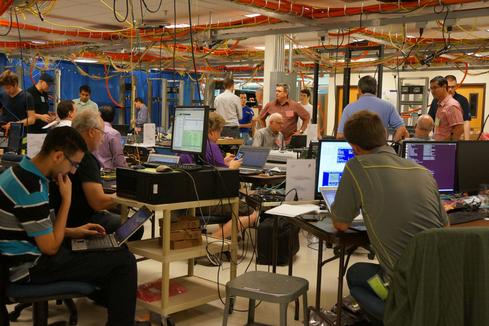 In the UNH-IOL, testing gear from Ixia and Spirent sat in the middle of the lab, generating traffic. Multiple vendor test stations, including a wide range of public and pre-release switches, servers, storage, and even IC evaluation boards, surrounded the test equipment. Pattern generation from the test gear was sent out to each testing station and then returned for evaluation and analysis. This was repeated with different variations in a massively parallel fashion.

The goal was a 95% confidence level, said D'Ambrosia, and products that didn't rise to the occasion were being modified to work in each scenario. "There are literally engineers in there changing coding on the fly, trying to make their technology work with all the different issues," he said. "It's real-time, on-the-fly troubleshooting."

The 25 GbE feasibility testing was performed similarly, but with the intent to assess the current state of development and provide critical input for the IEEE to actually write the new standard.

Getting vendors involved in testing at the beginning improves the standards process, and the vendors are realizing the growing importance of interoperability, said Lapak. "The participation we're seeing here includes so many early companies, and companies bringing early prototype equipment, to help drive the standard. They're not waiting until the spec is finished, they're participating at this stage and doing everything they can to facilitate progress."

The independent and confidential nature of the plugfest is a draw, D'Ambrosia said. It provides vendors a secured environment where they can "expose their dirty laundry and get stuff working."

Lapak agreed that the event offers vendors a unique opportunity to work with competitive equipment. It would be very difficult or impossible, as well as very expensive, for any vendor to acquire the array of equipment assembled at the plugfest. "Because we host the event in a neutral way, it really allows engineers the freedom to interactively debug and solve the problems they might not be able to address otherwise."

After just one day of the event, several of the vendors had already fixed problems and made their products better, according to Lapak. One company even asked its engineers back home to develop a fix for its optic module overnight so that it could implement it in the following day's tests. "Sure, that drives the interoperability forward, but it also benefits the individual vendors," Lapak said. "You can't get that kind of back-and-forth activity and troubleshooting anywhere else."

It also inspires some "coopetition" that would be otherwise unlikely, said D'Ambrosia. "How often do you see Cisco and Dell engineers working side-by-side trying to make the same thing happen?" he asked. "You literally are testing with your competition. But everyone's got skin in the game to show that it works, and you work toward that."