Cisco's Virtual Internet Routing Lab provides students and experienced networking pros with a tool to build network topologies. Here's what to expect in terms of capabilities and limitations.
Anthony Mattke

One of the most difficult things when starting out in networking is getting your hands on equipment. No one will argue against building a lab for studying, but there are better options than buying an entire rack of physical hardware. There's the network simulation platform GNS3, which has been around for years, but the legality of sourcing software images has always been worrisome. Now, Cisco has finally answered our call for a legitimate virtual lab that can be used by both students and experienced networking pros.

For those not in the know, Cisco’s Virtual Internet Routing Lab (VIRL) is a network design and simulation environment that includes a graphical user interface, much like GNS3, to build virtual network topologies. It includes an OpenStack-based  platform that runs your IOSv, IOSvL2, IOS XRv, NS-OSv, CSR1000v, and ASAv software images on the built-in hypervisor. Using the VM Maestro GUI, you can easily create complex network topologies and have the basic router and switch configurations built using AutoNetkit. 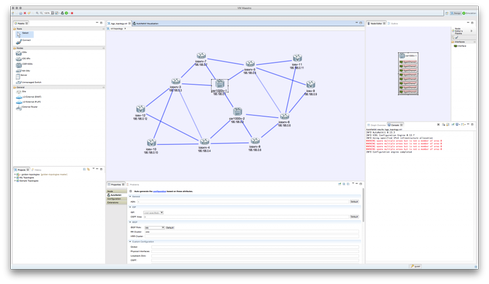 Cisco VIRL comes in a couple different flavors, including the Academic version which is currently available for $79. While this is designed for students, teachers, or school staff, the rest of us can use the Personal Edition of VIRL which is available for $199 and currently eligible for $50 discount using the **VIRL50** code. For enterprise users who want TAC support, in-depth documentation, training and more, there is Cisco Modeling Labs (CML), a high-end production quality version of VIRL.

What VIRL can and can't do

VIRL is a great tool for designing and building complex network topologies including routers, switches, and firewalls. I have even seen some users import Juniper VMs into the mix, so I imagine other vendors could be incorporated as well. AutoNetkit makes IP address configuration a breeze, and it will even set up some basic routing protocols for you. Another great feature is the ability to connect your virtual devices to physical hardware, extending your virtual lab into real world, without those devices even realizing they’re talking to virtual hardware.

VIRL is great at building labs with up to 15 devices; anything more than that, and you’re forced to start incorporating physical devices. As an aside, about a month ago there was a large update to VIRL, during that time many users reported their node limit temporarily increased to 25! This may have been a bug, but hopefully it was Cisco testing the waters for increasing higher node count as many users have asked for.

The other downside to using VIRL is when you get into more advanced technologies. Many advanced features are broken, and it’s hard to find documentation on them. I struggled with this when building a VXLAN lab a couple months ago. This is where the benefits of TAC support with CML come in handy.

Also missing is anything that requires the emulation of an ASIC or FPGA. These devices are far too complicated to be emulated in software, and I don’t see Cisco working on that any time soon.

VIRL is pretty amazing when you sit down and think about it, but there are some other issues to think about. The minimum spec for VIRL is an Intel-based computer with four CPU cores, 8 GB of RAM and 50 GB free disk space. I have run into issues with machines well above this spec, and would recommend at least 16 GB of memory. This is a far cry from the minimum spec for CML, which currently recommends a Cisco UCS C220 M3 rack server with 16 core CPU and 128 GB memory! But then again, CML also has a 100-node device limit.

If you plan on running VIRL on your laptop, make sure you already own VMware Workstation or Fusion. VIRL is not compatible with VirtualBox or other non-VMware hypervisors. The current installation is also semi-complicated, which could be a challenge for a CCNA student who is new in the field. If you have some Linux experience and a couple years under your belt in IT, you should be fine.

Designing for the future

Products like VIRL and CML are going to change the way we study, design, and test network configurations. As these products mature, it won’t take long for the networking community to take notice.

Moreover, Cisco has put itself on the path to securing a future of continued Cisco certification by giving new CCNA, CCNP, and even CCIE students easy access to its technology. In addition to VIRL, Cisco is selling a cloud-based version of its IOS on Linux (IOL) software with Layer 2 support specifically designed for CCIE candidates. This is certainly an interesting time for our field.