Despite SDN and open networking, the network hardware market continues to grow and Cisco remains the dominant supplier, according to Synergy Research Group.

The research firm released new data this week showing that worldwide switching and routing revenues topped $11 billion in the third quarter and totaled $44 billion for the last four quarters. That represents growth of 3% on a rolling annualized basis, Synergy said.

In Q3, Cisco's share of the overall global switching and routing market was 51%, far ahead of the pack. In the enterprise routing segment of the market, Cisco achieved a whopping 63% share, and a strong but less dominant share in the service provider routing segment (38%), according to Synergy.

Overall, Cisco's leading competitors are Huawei, Juniper Networks, Nokia, and Hewlett-Packard Enterprise with shares in the 4% to 10% range in the third quarter, the research showed. 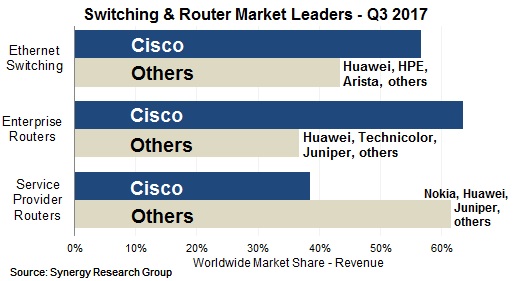 Cloud giants such as Facebook have developed their own networking gear and open networking options are growing, but so far these trends haven't hurt the traditional network equipment market or Cisco's lead, Synergy's research indicates.

“The big picture is that total switching and router revenues are still growing and Cisco continues to control half of the market,” John Dinsdale, a chief analyst at Synergy Research Group, said in a prepared statement.

“Some view SDN and NFV as existential threats to Cisco’s core business, with own-design networking gear from the hyperscale cloud providers posing another big challenge. While these are genuine issues which erode growth opportunities for networking hardware vendors, there are few signs that these are substantially impacting Cisco’s competitive market position in the short term," Dinsdale said.

Ethernet switching -- the largest segment of the switching and routing market -- has the highest growth rate, the firm reported. The segment was buoyed by growth of 100 Gigabit Ethernet and 25GbE switches in the third quarter.

North America accounted for more than 41% of worldwide revenue in the overall market. Asia Pacific remained the fastest growing region, primarily due to spending in China, which benefitted Huawei, according to Synergy.

Prepare for That Next Natural Disaster: Lessons Learned in Texas
Bill Leedecke
March 4, 2021
3 Security Issues Overlooked By the NIST Framework
Sam Bocetta
March 3, 2021
Why AI is Eating Networking
Manoj Leelanivas
March 2, 2021
Using the Cloud as WAN Transport
Andrew Froehlich
March 1, 2021
Do These 5 Things Before Moving Your Business to the Cloud
Bill Lundgren
February 22, 2021