The software-defined WAN market remains red-hot, and the list of vendors contending for a piece of it grows longer all the time. In addition to the startups that pioneered the space, established networking vendors have added SD-WAN capabilities, and service providers have struck deals with SD-WAN vendors to broaden their portfolios. Now add Aerohive Networks, best known for its cloud-managed WiFi products, to the list.

The company said it's developed software-defined WAN technology that provides unique capabilities and extends its cloud-managed platform from the LAN to the WAN. Executives are undaunted by the crowded market.

"We're not aiming to be a 'me-too' SD-WAN vendor," Milind Pansare, Aerohive strategic marketing director, told me in an interview.

In addition to application-based policies, Aerohive supports user-based policies, which Norival Figueira, director of product management at the company, told me is unique. That allows companies to implement fine-grained policies for path selection based on a user's identity and device. These "identity-driven" policies can apply to internet of things devices too, Pansare said.

Management of the SD-WAN is performed through the same cloud-based management platform Aerohive provides for its wired and wireless LAN products, HiveManager NG. Aerohive sells campus switches in addition to wireless access points, and calls its cloud-managed approach software-defined LAN.

Aerohive's SD-WAN has three pieces: the XR200P router that's installed at remote locations, a virtual VPN gateway, and HiveManager. The virtual VPN gateway creates encrypted layer 3 tunnels from the routers and hands off the traffic to data center switches at a company's headquarters. HiveManager NG automatically pushes out configurations to the remote sites. 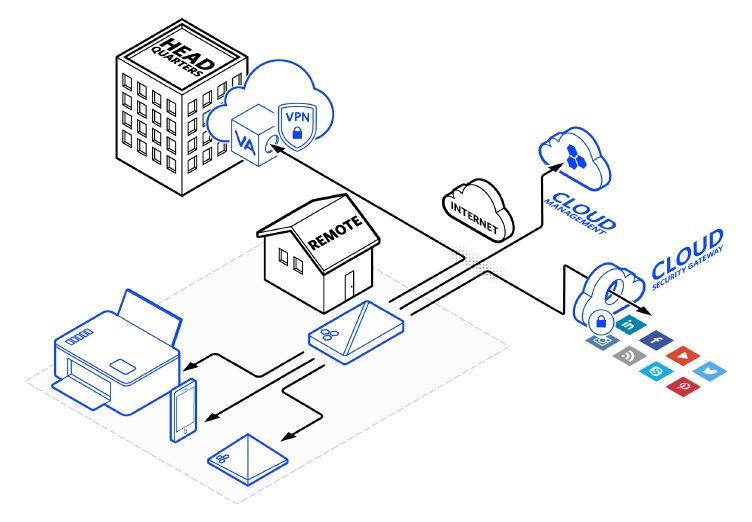 The product is designed as "zero-touch," so that companies can easily and quickly deploy it without requiring expertise at each branch office.

HiveManager provides unified cloud management for LAN and WAN and works in either a public or private cloud model, Pansare said. The software is available hosted in the public cloud by Aerohive or customers can deploy it on a VM behind their firewall.

Pansare said Aerohive started working on its SD-WAN several months ago, when it began refreshing a branch router that had some SD-WAN capabilities.

The XR200P will be available in January; right now it costs $699, but Pansare said it may wind up being less. The virtual VPN Gateway costs $2,999.

IDC predicts that by mid-2020, SD-WAN will be a mainstream foundation technology, as an "enabler of edge computing." The SD-WAN market will represent more than $6 billion in spending on infrastructure and managed services by 2020, according to IDC.

It's hard to say how Aerohive's SD-WAN product will fare in the busy space, but the entry of a cloud WiFi specialist is intriguing.