IT Pros Brace For Holiday Nightmares

While other employees are taking time off or partying it up during the holiday season, IT teams are busy fixing problems, according to an Ipswitch poll.
Network Computing Editors

While many workers enjoy relaxing and having fun during the holidays, IT pros often don't have it so good. They're usually still hard at work, putting out fires and dealing with the fallout of all the holiday parties. At least that's what a recent survey discovered.

Ipswitch, a supplier of network and server monitoring tools, polled 378 IT pros in the US earlier this month and found that up to 56% will be on call or working during the holidays (up from 49% in a similar survey conducted by Ipswitch last year). About 40% expect to work Christmas Eve and Christmas Day.

Even though the office may be closed for the holidays, IT teams are dealing with user problems, the survey found. Laptop problems top the list, reported by 39% of those polled. Malware on laptops -- which always seems to become particularly prevalent around the holidays -- also was a big problem, according to the survey.

And IT pros are often left cleaning up the mess after the rest of the company whoops it up at holiday parties. The survey found that 47% of IT pros have had an employee lose a device with corporate data after holiday festivities. Of that 47%, 31% said a user had lost a tablet, phone or laptop at a Christmas party, bar or restaurant and 16% said a user reported losing a device in the back of a cab or on public transportation -- presumably after he or she rode home in a drunken stupor.

Check out Ipswitch's infographic for a snapshot of the survey results. 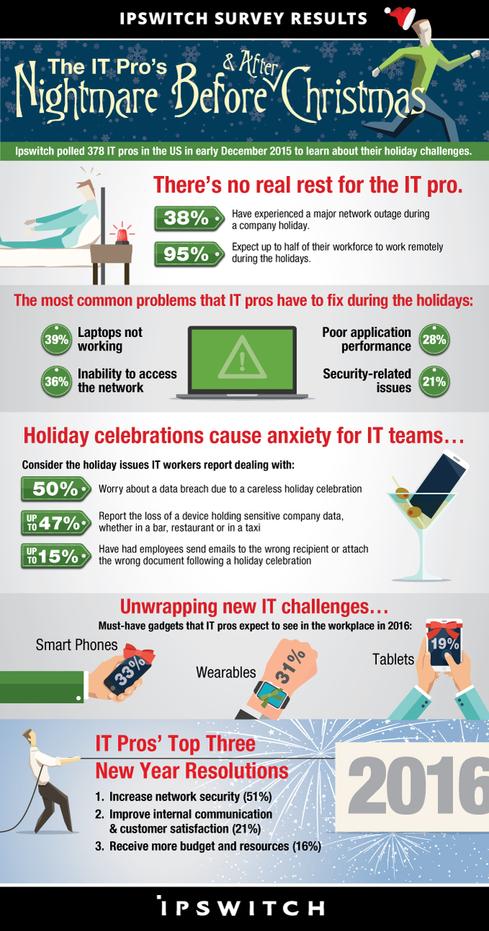