What Will Replace Flash?

Technologies such as RRAM are vying to upstage flash memory, but have a long way to go. Meanwhile, flash suppliers are making improvements.
Jim O'Reilly

Despite all its benefits, flash has some serious drawbacks. The technology has a wear-out problem, with a relatively low limit to the number of write cycles each storage cell can go through before storage becomes unreliable. The issue is compounded by the fact that any attempt to increase storage density reduces the wear life considerably. Die shrinking to increase bits per die, transitioning to two or three bits per storage cell (MLC and TLC technologies) or a combination of these all lead to increased wear problems.

Flash memory also is slower than we would like, and can only operate efficiently in block-IO mode. This factor means that flash is deployed like hard disks, with the attendant delays of software stacks and multiple interfaces. Ideally, a byte-addressable, faster memory would better meet the needs of current computer systems. Flash has taken us tantalizingly close to this idea, but it just falls short.

There have been a number of technologies touted as  alternatives to flash; all involve weird physics that change electron spins or modify the physical state of a layer of storage medium. There are as many as 10 technologies in the research labs today, and none of them are market ready at this point, although proof-of-concept devices are available for a few of them.

The strongest contender to take over from flash is resistive random-access memory (RRAM), where storage devices flip between two resistance levels to store binary data. Compared with flash, RRAM offers small devices, much faster switching speed and at least a 10x improvement in wear life. The leader in this technology is Crossbar, with samples in the megabit range (compared to gigabits in flash die). 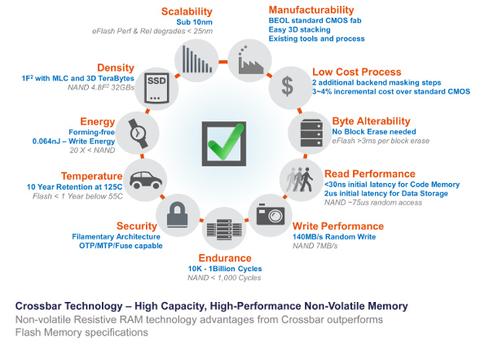 Unfortunately, development to scale out capacity of RRAM has been beset by a series of physics problems, including bit-to-bit interference on reading and writing caused by the selection transistor on the cell -- a problem common to many of the flash alternatives. This has limited yield to relatively low capacity die and delayed deployment of the technology by more than a year.

Now, Crossbar claims that it's found a way around this problem, which should open the door to a persistent memory type that, while only a tenth of the speed of DRAM, can be accessed a word at a time using DRAM-type interfaces. With some up-front SRAM, even the slower write speed can be masked to an extent, making this very attractive as a technology.

Other vendors are at the sample stage with their flash alternatives. Micron has phase change memory (PCM) that also promises high speeds. In addition to the same cell transistor issue as RRAM, PCM has problems with heat, using a lot more power to change a cell’s state. This could be a problem when scaling. HGST has announced a storage device using Micron’s chip, but again, it's a proof of concept rather than a serious product.

Meanwhile, HP is developing its Memristor technology. Like RRAM, this is a resistance change scenario, but the mechanism for changing values is different. Cell transistor cross-talk is also a problem, and the transitioning of a cell may be slower than Crossbar’s approach.

All these new technologies stack well in three dimensions, although only Crossbar’s currently appears to have what the company calls a 1 Transistor driving n Resistive storage cells (1TnR) to maximizer packing density. This makes Crossbar the most attractive of the alternative technologies at this time.

Flash suppliers  are responding to the challenge presented by these new technologies. Several device makers have created 3D devices that vertically stack storage cells over a single drive transistor. This approach creates capacity multipliers of 32x or 64x, and even beyond. As a result of the gains, makers have backed off a couple of nodes (die-shrinks) to increase yield and avoid extra capital investment to meet demand. One other benefit is a dramatic improvement in wear-out with the larger cell sizes.

The result is that all of the flash makers are talking about cost and capacity parity of flash and bulk hard disk in 2017, at the 10TB/drive point, with flash pushing ahead on capacity beyond that point. This is clearly very bad news for the HDD makers, which have run into their own technology roadblocks and are seeing a slowing in drive capacity growth.

3D NAND flash doesn’t address the speed or byte addressability issues, but with excellent price-performance and an overwhelming market presence, is a formidable development. 3D NAND will hold off the competition at least for five more years, with new technology products fitting only niche needs for most of that time.

Remember, too, that to create byte-addressable persistent memory using RRAM or any of the alternative technologies will need massive changes in operating systems, applications and tools such as compilers and link editors before the market can assimilate it.