VMware NSX has come a long way from its early days as a single product, a network virtualization platform for data centers. It's now the foundation for a broad collection of products and capabilities designed to provide connectivity and security across data centers and branch offices to applications that reside on-premises or public clouds and built on a variety of platforms including containers.

The collection enables what VMware calls the Virtual Cloud Network: A flexible, software-defined network that provides comprehensive, seamless and secure connectivity. The goal is to meet the needs of modern enterprises, which are increasing moving applications to the cloud and expanding beyond traditional virtual machines to containers.

A key piece of VMware's expanded NSX strategy is its integration with VeloCloud, the software-defined WAN startup the company acquired last fall. Sanjay Uppal, who co-founded VeloCloud and is now VP and GM of VMware's VeloCloud business unit, said VeloCloud -- now called NSX SD-WAN -- removes the complexity of connecting branch offices by providing a virtual networking service run through the cloud. Integration with NSX provides the ability to extend NSX's microsegmentation capabilities in the data center across the WAN and the entire software-defined fabric.

Now that VeloCloud is part of VMware, more doors have opened, and the company is attracting customers such as financial-services firms that previously may have been wary of buying from a startup, Uppal said in the briefing. 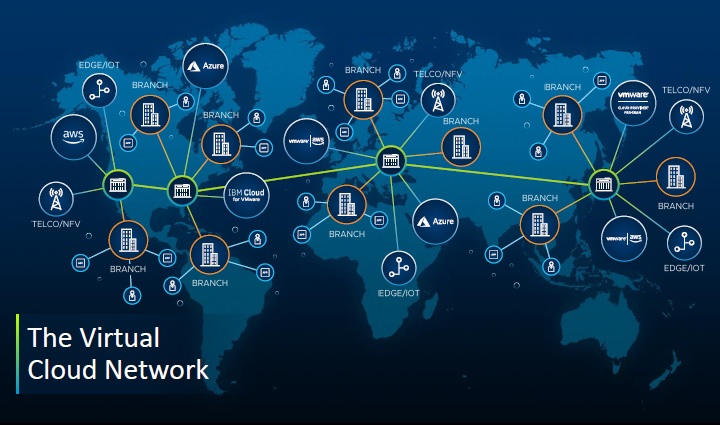 Of course, every major infrastructure vendor is taking steps to support multi-cloud and hybrid IT environments. Just last week, Juniper Networks said Contrail Enterprise Multicloud, which it launched in December, supports workloads running anywhere: physical and virtual environments, any cloud, and multi-vendor environments. Contrail Enterprise Multicloud is focused on the data center, but Juniper executives have said they're working to add SD-WAN capabilities.

The strategic moves by networking vendors come as enterprise shift more workloads to the public cloud. According to the Interop ITX and InformationWeek 2018 State of Cloud Computing Survey, 43% of 200 organizations surveyed are running workloads in the public cloud, up from 24% in a similar survey from 2014.

Also similar to competitors like Juniper and Cisco, VMware has added support for containers, however for VMware the move perhaps has more significance, given its core business in server virtualization. Last December, VMware added support for Pivotal Container Service (PKS) in an update to NSX-T, a version of NSX focused on emerging "cloud-native" application architectures. PKS, launched last year by VMware and Pivotal in collaboration with Google, provides users with a way to run Kubernetes and containers on vSphere.

VMware has expanded its NSX container support to more general Kubernetes distributions and RedHat OpenShift's container platform, according to Peder Ulander, VP of product marketing in VMware's networking business unit. NSX also supports bare-metal servers for consistent networking and security regardless of a workload's construct and where it's running, he said.

VMware aims to shed preconceived notions about NSX by promoting it as a neutral networking technology, Dan Conde, an IT analyst told me. "People tend to associate NSX with virtual machines. They want to get rid of that stigma," Dan Conde, an IT analyst, told Network Computing. Networking is a critical component for containers, which are ephemeral by nature, he added.

According to the Interop ITX cloud survey, the number of survey respondents using containers in production grew to 12%, up from 7% a year ago. Containers are attractive to companies as they provide speed and agility compared to traditional monolithic application architectures.

VMware said it counts more than 4,500 customers and more than 2,000 NSX SD-WAN customers.