NOT SO FAST
There are downsides to running applications without an operating system.

First American can't install third-party clients on the platform. "You either need to find a Java driver or remain on a traditional OS," Vaughn says. He notes that a small percentage of his deployments will remain on a conventional operating system because of this issue.

Other features that users might find helpful have also been removed. There's no GUI, and no support for local devices, including printers. And instead of using a local hard drive, WLS-VE must use network-attached storage.

Management also is an issue. Many systems management and application management products interact with the operating system. Without the OS to act as mediator, existing IT management processes, such as the ability to automatically generate trouble tickets, might need to be overhauled. 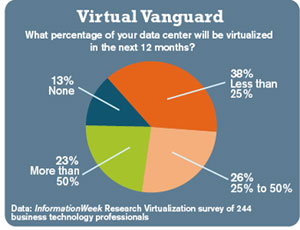 It may even require additional management software. Case in point: BEA is rolling out the Liq-uid Operations Center, an agent-based system that deploys and manages both virtualized and nonvirtualized Java applications. If other application vendors take BEA's approach, they, too, will introduce their own management systems and agents, increasing the number of standalone consoles in the IT environment.

Of course, BEA isn't proposing that all general-purpose operating systems should be done away with. WLS-VE is aimed at service-oriented architectures, in which a number of services are brought together, often on the fly, to create an überservice. The more flexible and streamlined you make those components, the more efficiency you can wring from the architecture.

At present, Liquid VM runs only on VMware's ESX server, but BEA says it will support XenSource's hypervisor by the end of the year. The company also intends to support Microsoft's forthcoming hypervisor.