SDN In the Enterprise

The hype around software-defined networking used to be inescapable; today, some vendors even steer clear on the term. But a panel at Interop ITX showed that the technology is still very much alive and changing the way enterprises run their networks.

"If you watched the Super Bowl on Fox, you watched SDN," Thomas Edwards, VP of engineering and development at FOX Networks Engineering & Operations. "We use SDN to have fine-grained control over packets on our network," he said, explaining how the company uses SDN to move compressed videos to its regional networks.

Gap Inc. has implemented a closely related technology, software-defined WAN, at 1,350 of its retail stores in the US and is expanding the initiative internationally, said Snehal Patel, network architect at the company. If you shopped at one of the company's stores after 2015 and used a credit card, there's a good chance the transaction travelled over Gap's SD-WAN, he said.

At Microsoft, SDN is being rolled out in an internal pilot project using OpenDaylight with the goal of improving the end user experience with Skype and video in branch offices, said Gert Vanderstraeten, network architect in Microsoft's IT organization.

The panelists discussed why they decided to adopt SDN and lessons learned. They talked about benefits such as agility and cost savings as well as challenges in shifting away from traditional networking.

Vanderstraeten said Microsoft tries to encourage network engineers to learn a programming language such as Python in order to understand how software works. "You have to understand what is possible in software and what isn't," he said. "If you have no clue about programming, that becomes difficult."

Learning OpenFlow concepts provides good background for SDN even if an organization chooses an SDN solution that's not based on the protocol, Edward said. "You can learn it faster than OSPF," he quipped. 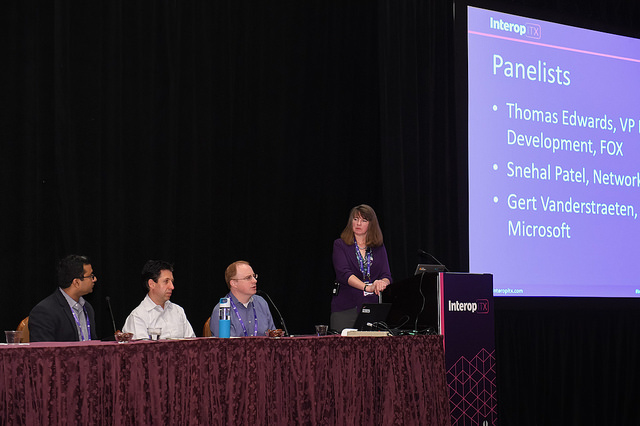 Patel said network engineers need to change their approach and that OpenFlow "will change your mindset of how networks are configured."

When Gap implemented SD-WAN from Viptela, training was key, he said. "We had to train the engineering and architectural teams to think about the control plane, not just the data plane," he said, adding that operations engineers accustomed to CLI had to be trained on the SD-WAN dashboard.

While the panel talked about the educational benefits of OpenFlow, they also noted that SDN has moved far beyond the protocol.

"For many people SDN is still OpenFlow, but in the real world, SDN/SD-WAN is a lot more than OpenFlow," Patel said.

Panel moderator Lisa Caywood, director of ecosystem development at the Linux Foundation's OpenDaylight Project, said OpenFlow applies to a specific set of uses cases. "It's [SDN] not so much about the protocols," she said. "It's about the interfaces. That's the shift we've seen."

Organizations interested in adopting SDN should start small, Vanderstraeten said. "Put a toe in the water with SDN then take it to the next step," he said. Patel recommended conducting POCs with new vendors and challenging incumbent vendors to provide new features. "We call it crawl, walk, run."