Martin Casado on SDN, IBN, and the API Economy

At Interop ITX, SDN pioneer talks about how software-defined networking has influenced the industry and other trends.
Marcia Savage

As a general partner at VC firm Andreessen Horowitz, Martin Casado has moved beyond the world of networking, but keeps a close eye on what's happening in the industry. At Interop ITX, the legendary pioneer of software-defined networking shared his thoughts on the state of SDN and a range of hot topics like intent-based networking.

In a "fireside chat" with IDC Senior Research Analyst Brandon Butler at the Networking Transformation Summit, Casado talked about his work developing the SDN concept while a graduate student at Stanford University. Today, the term SDN has been abused so frequently that it's beyond recognition, he said. "To me, it was an architectural framework for how you build systems," Casado said. "It didn't dictate the system you built."

The concept has had widespread influence beyond its academic origins, including software-defined WAN, new fabrics, and even at the edge, he said. "More and more systems are being built on an SDN approach." 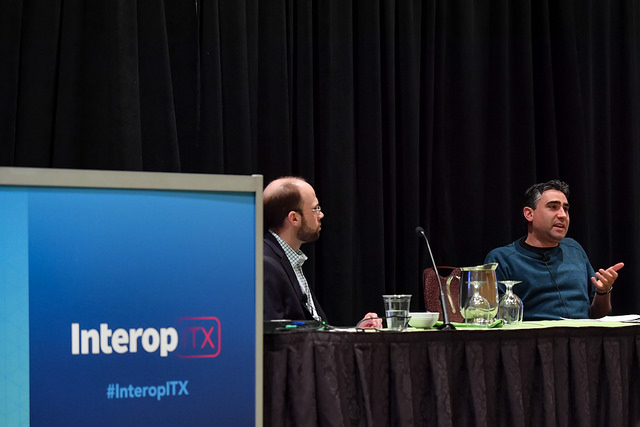 Casado described SD-WAN, one of the hottest trends in networking, as more about automated provisioning than network virtualization, which he defined as abstracting the network from the underlying physical topology. A virtual network "ignores the fact there's a physical world out there," which works well in the data center, but not so much when it comes to the WAN, he said. "While there is a virtual layer there, the reality is you still need to know there are a lot of links."

Casado also offered his perspective on intent-based networking, a hot buzzword in the industry today. The idea is to enable a business person to create a high-level declaration in English that the network implements, which isn't all that simple since business demands can be fairly complex, he said. While people like to apply artificial intelligence and automation to this concept, he doesn't think that they're needed for changing network policies.

"If you look at the SOC or the NOC, these are rich areas for applying AI," he said. "That's because you have human processes that are responding to events in the network, where you don't have a declaration." More automation there would enable better response, Casado said.

APIs are becoming the dominant factor in IT now, he said. He travels constantly between the Silicon Valley and San Francisco, and 50% of the billboards along the way are for companies whose primary interface is an API.

This explosion of APIs are endpoints that will require security, visibility and performance. For enterprise networking pros, they need to understand that value is moving up the stack, Casado said.

"The network is more relevant to the application layer than ever before," he said.