Even if you're well paid, it's hard to be happy if you don't get along with the people you work with. A study released today by Spiceworks bears this out. In surveying members of its professional network, the company found that good relationships with co-workers are more important than money when it comes to happiness on the job.

Sixty-one percent of 853 IT pros in the US and UK ranked co-worker relationships as the top driver for workplace happiness, according to Spiceworks' 2017 Job Satisfaction Report. Annual pay and stress level came in second, cited by 53% of survey respondents.

Of course, that means that money still matters a great. As Spiceworks notes in its report, even though money alone can't guarantee happiness, it definitely can help.

The survey also found that company size also plays a key role in whether an IT pro is contented at work. Sixty-six percent of IT pros working at small companies with less than 100 employees reported being happy, and 62% of those working at midsize organizations with 100 to 999 employees said they were content.

Fewer of those working for companies with more than 1,000 reported workplace satisfaction: 55%. They're also more stressed out than IT pros working in SMBs: 39% of enterprise IT pros said they're highly stressed compared to 30% of SMB IT pros.

A great working environment can offset poor pay, it seems. Spiceworks said its data indicates that IT pros working in SMBs are paid 8% less than their counterparts working in large companies. The study also showed that 43% of IT pros working at smaller companies believe they're fairly paid compared to 54% at large enterprises. 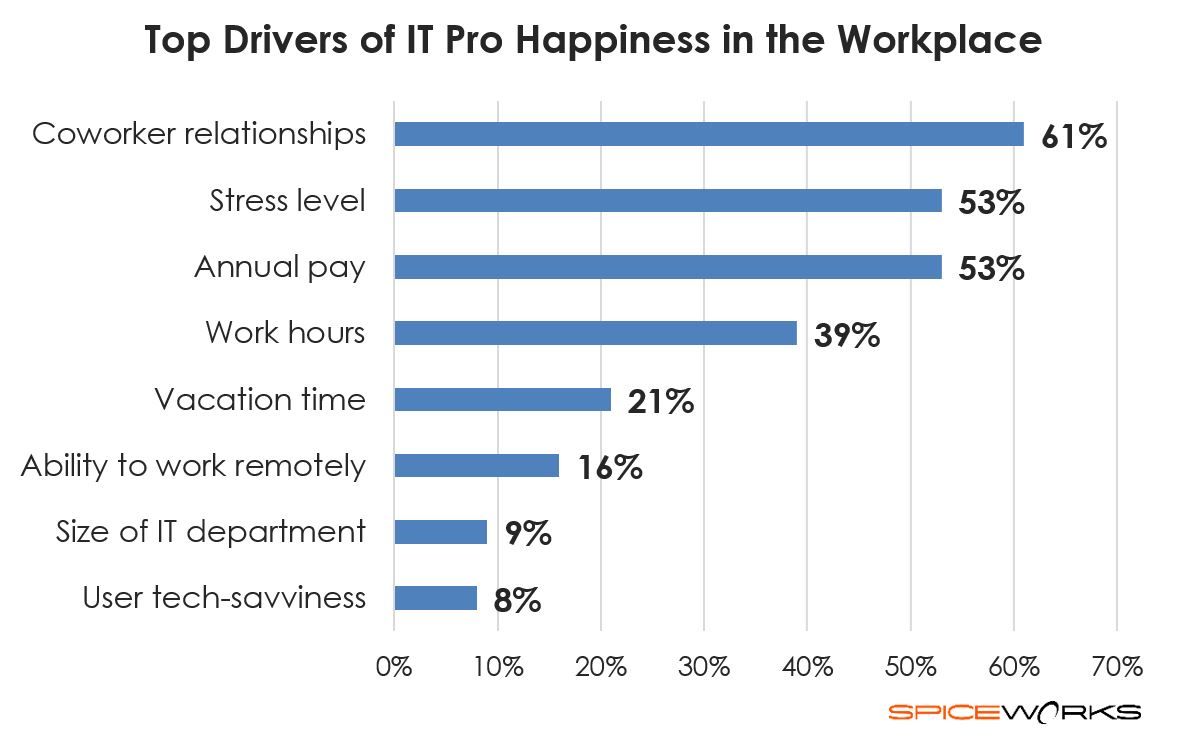 Spiceworks also found that job title plays a key role in on-the-job happiness and stress levels. Seventy-percent of IT directors reported being happy in their jobs, compared to 64% of network administrators and 54% of IT managers.

At the same time, 54% of IT directors reported being highly stressed, compared to 44% of IT managers, 28% of network admins, and 21% of help desk technicians. Spiceworks interpreted the results as IT directors feeling their work is more rewarding because of their position of authority, which could offset the stress.

Other interesting findings in the study include that happy IT workers are nearly twice as likely to report living in an area they view as having a favorable job market, and about two-thirds are more likely to have co-workers they consider as tech-savvy. Other factors such as gender, marital status and full-time vs. part time work did not have measurable impact on workplace happiness, according to Spiceworks.