IT Needs to Break Its 'Logo Addiction'

At Interop ITX, a Whole Food/Amazon IT infrastructure expert says enterprise IT must shift away from buying products to building its own solutions based on open source software.
Marcia Savage

Enterprise IT teams need to break their habit of buying packaged solutions from big vendors and turn to commodity hardware and open source in order to drive innovation and become real partners to the business.

That was the key message in a provocative keynote delivered by Peyton Maynard-Koran, senior director of worldwide infrastructure at Whole Foods/Amazon at Interop ITX on Wednesday. A technologist with extensive experience in networking and infrastructure, Maynard-Koran kicked off the day by looking at the state of enterprise IT and offering his view on how it can transform in the cloud era.

"IT has to change. We are at the moment where we have all the tools and capabilities that allow us to start reinventing ourselves, our teams, and become a true partner to the businesses we support," he said. "We can start driving innovation to our businesses. We can help them move faster."

Enterprise IT must change in an environment where businesses are increasingly turning to cloud services, he said.

'"We have put IT in a box, this is a thing we need to consume, whether email, a phone or computer. We haven't looked at IT as an innovation engine. We're seeing the IT workforce shrink…Businesses are going outside IT box to get services they need and their big partner is cloud computing." 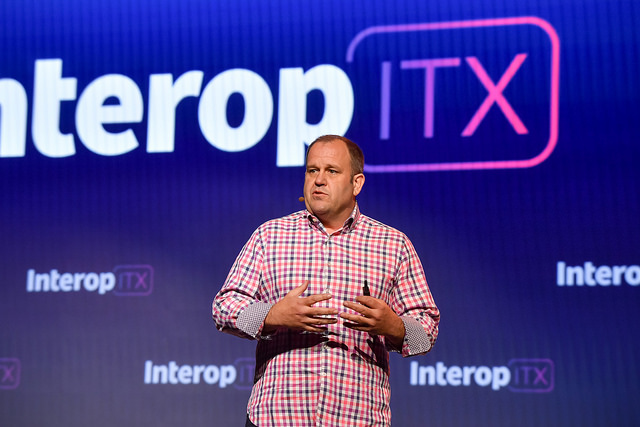 Using the cloud, businesses can get their email or other infrastructure set up in minutes compared to the months or even years it might take with the IT department, he said. The problem is that IT costs too much by continuing to work the same way with vendors that it has for years.

"We have a logo addiction. We believe there are these really smart companies that we can consume things from…and never have to worry about, which is a completely false statement," Maynard-Koran said. "Vendors don't have the secret sauce anymore. Anything you could do with a big vendor you can do with a commodity vendor."

By using commodity hardware, a company can save 70% to 80% on hardware alone, he said.

A major trend for a few years now has been the rise of open networking, also called disaggregated networking, as an alternative to traditional propriety switches with tightly coupled hardware and software. The trend allows customers to run their choice of network operating system software on a switch, which can be commodity hardware. Web-scale companies have jumped on open networking, which some industry experts have said can require extensive resources to implement.

Focused on their bottom line, the vendors and the value-added resellers that many IT teams rely on will undercut those efforts with fear, uncertainty, and doubt, Maynard-Koran said. "They've created a situation where we actually believe that we can't do this that this stuff, and that it's hard."

On the contrary, it's easy for tech pros to learn how to use white-box switches and open source software, Maynard-Koran said. That results in asking the business for less, money, which frees IT teams to "build IT products that make the business work faster and better."

Enterprises need to build a culture that supports technology becoming part of the business, he said, urging attendees to look at their team and consider whether new ideas are encouraged, whether failures are learning opportunities, and if cross-functional collaboration is rewarded. Also, call yourself a technologist rather than an IT pro, he said. "Most importantly, we need to believe in ourselves."

Communities are critical to the open source revolution, Maynard-Koran said. He plugged the Open Enterprise Foundation, which he founded. The nonprofit prioritizes mentorships to help bridge the gap between technologists and business leaders.

If enterprise technology teams own the ecosystem, they can iterate fast, he said. "We become an integral part of the company, not just something consumed out of the box."