With its promises of greater data center agility and efficiency, hyperconverged infrastructure has been one of the hottest IT trends in the last couple of years. At Interop ITX, analysts from Enterprise Strategy Group provided insight into the technology and advice for enterprises before they take the plunge.

Hyperconverged systems – as well as their predecessor, converged infrastructure – are something of a flashback to the all-in-one mainframe systems IT shops used to buy from companies like IBM, ESG Analyst Dan Conde said. Mainframes gave way to the best-of-breed, do-it-yourself approach to IT infrastructure

"I liked that world where we could pick and choose and create the system we wanted," Conde said. This freedom to choose IT components came with a price, though, which has led to interest in converged systems and hyperconvergence.

"We've suffered trying to mix and match things and make them work," Conde said. "It was a pain because of the collective failure of the IT vendor community and standards bodies to make things work in a completely transparent way."

Converged infrastructure like FlexPod or Vblock combine compute, storage, and networking in one system and bolt them together with management software, ESG Analyst Jack Poller said. "When you have a problem, you have one vendor you can complain to," he said.

Scaling this type of environment requires adding another full rack. "You still have to do all the work to pull it together," he told attendees.

Hyperconverged infrastructure take the integrated concept a step further by providing a Lego-like approach to storage, networking, and compute resources and using software to cluster them together into a single pool, Poller said. This enables scaling on a smaller level. "What's important about hyperconvergence is the software stack," he added.

For enterprise IT pros under pressure to improve agility and have regulatory compliance requirements that require them to keep hardware on premises, hyperconvergence is a way to build private cloud, Conde said.

"Don't be afraid. If you want to do something with cloud speed on premises, use hyperconverged infrastructure," he said. 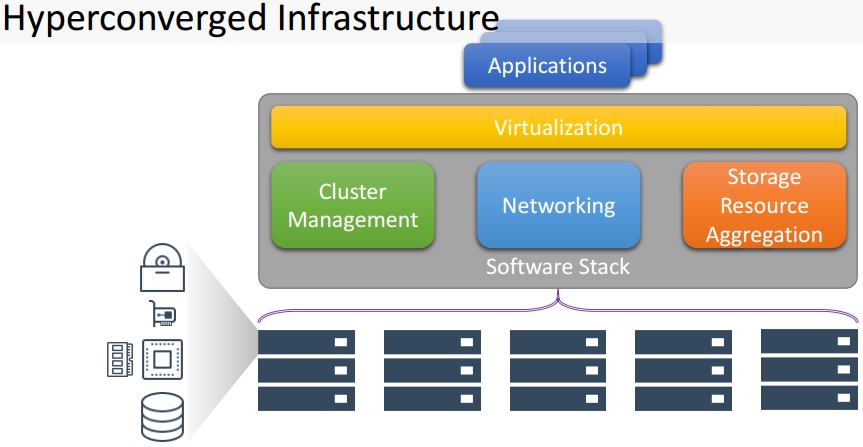 The top drivers for converged and hyperconverged infrastructure adoption include improved service and support, improved scalability, and increased agility of virtual machine provisioning, according to ESG research. "It's a way to make our private cloud as competitive as the public cloud," Conde said.

The survey also revealed enterprise concerns with the technologies: Performance concerns around data locality, lack of flexibility when scaling, and vendor lock-in.

ESG also found that many enterprises – 57% of 308 those polled -- plan to stick with their traditional best-of-breed approach to IT infrastructure.

While many organizations have deployed or plan to deploy converged/hyperconverged infrastructure, they don't expect the new systems to completely replace their traditional on-premises infrastructure provisioning, according to ESG.