For a technology that's been declared dead since at least the Clinton (Bill, not Hillary) administration, there's been a lot of news coming from tape vendors during the past few weeks as they update their product lines to use sixth-generation LTO tape technology to boost capacity and performance.

Recently HP announced that it was updating its entire line to LTO-6, from standalone drives to enterprise tape libraries. HP is also re-branding its tape portfolio to StoreEver, which aligns with its StoreOnce deduplicating backup targets and StoreVirtual virtual storage appliance. The StoreEver moniker fits as tape evolves from being the primary backup medium to a longer-term, less-active medium.

With this announcement, HP joins IBM in shipping LTO-6 drives for not only for their own loaders and libraries but also for OEMs like Quantum and SpectraLogic. Quantum of late has not made its own LTO-5 or LTO-6 drives, despite its previous history as a drive manufacturer, and its position as one of the three design ownership partners in the LTO consortium, having bought the Seagate/Certance seat at the table.

LTO-6 boosts native capacity per cartridge from 1.5 Tbytes to 2.5 Tbytes, with compressed capacity growing to 6.25 Tbytes. Native performance is slightly higher at 160 Mbytes per second. Speeds can reach 400 Mbytes per second, which could saturate a 4-Gbps Fibre Channel link, with compression. While tape is always a low-power alternative to spinning disks, HP's LTO-6 drives also have a very-low-power hibernate mode that shuts down not just the tape transport motor, but also the cooling fans when there's no tape loaded in the drive.

Astute readers will recognize that part of the performance improvement for LTO-6 is due to an increase in the claimed degree of compression, from 2-to-1 for most earlier tape drives to 2.5-to-1 for LTO-6. While LTO-6 drives still use a variant of the Lempel-Ziv compression methods, the new drives compress data in larger chunks to improve efficiency.

[ Join us at Interop Las Vegas for access to 125+ IT sessions and 300+ exhibiting companies. Register today! ]

Unfortunately, the standard for evaluating compression algorithms, The Canterbury Corpus, dates back to 1997 and is made up of only 11 files, most of which are text or source code. This may have been representative of the data on most computers 15 years ago, but it's significantly more compressible than the data you and I deal with on a regular basis. I'll report whether I actually get better compression when the promised LTO-6 drives arrive in the lab, but till then I'll assume the new drives give me the same compression I've gotten in the past.

While HP's announcements were pretty much what we've come to expect when a new generation of drives hits the market, Quantum announced a new high-end library, the Scalar i6000, that uses a rotating carousel arrangement to cram more tape cartridge slots in a standard 19-inch rack frame than competing libraries. 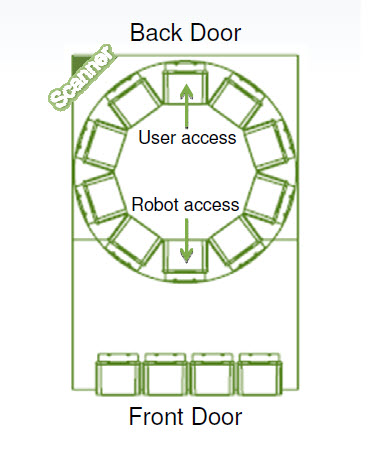 SpectraLogic's T950 and T-finity can grow significantly larger than the Scalar i6000's 7,224 slots and 45-petabyte of capacity, but there are organizations, such as my former clients in New York, with space-constrained data centers that will appreciate the additional density of the i6000. They'll also appreciate that Scalar i6000 frames fit in the standard 2-by-3-foot footprint of most server cabinets, and therefore into existing rows.

The Why and How of a Two-Tier Network Monitoring Topology
Ron Stein
May 11, 2021
Understanding the 3 Key Edge Deployment Options
Andrew Froehlich
May 12, 2021
Why Companies Are Migrating Legacy Systems to Cloud Infrastructure
Sam Bocetta
May 10, 2021
What Will Be the Next New Normal in Cloud Software Security?
Joao-Pierre S. Ruth
May 14, 2021
Is the Edgeless Enterprise a Foregone Conclusion?
Rajeev Shah
May 7, 2021