Flash Tailored For The Enterprise

Makers of all-flash storage arrays like Violin Memory are adding enterprise features, while SanDisk is boosting the performance of its flash products.
Jim O'Reilly

With the replacement of enterprise hard drives by solid-state technology accelerating, vendors of all-flash storage arrays and high-performance flash products are looking to consolidate their presence in the enterprise. Though 2013 was characterized by a lot of boasting about relative performance, today's market is beginning to differentiate based on feature sets.

Enterprise features are beginning to appear in top-end arrays, and it's just a matter of months before the all-flash products are as feature rich as EMC VNX arrays. They will offer deduplication, compression, encryption, thin provisioning, snapshots, tiering, caching, and other software goodies, but at much faster performance levels.

A good example of this trend is the new set of arrays from Violin Memory. The storage startup followed the old rules of better speeds and feeds, and it released a faster, higher-capacity array. However, its Windows Flash Array (WFA) is a different story. It builds Windows Storage Server (WSS) into the array, with redundant controllers. 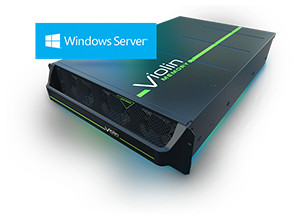 The WFA has all the features the WSS code base supports, and that's an impressive list. And the product was built with help from Microsoft, so it's positioned to take advantage of any virtualization and distributed functionality that Microsoft is planning.

It wouldn't be going out on a limb to predict that the migration of WSS into super-fast storage will lead to close-coupled solutions such as Hyper-V optimization, file system redesign, much thinner storage-software stacks, and virtualized WSS processing.

In another part of the market, SanDisk is making great strides to optimize in-server flash modules. It already made waves by announcing a flash memory system using the memory bus as the I/O path. These UltraDIMMs use a RAM buffer to handle the speed issues between flash and the memory bus. SanDisk has also picked up Fusion-io's PCIe flash card business. Putting UltraDIMM and PCIe Flash together results in blindingly fast flash performance, though it is at the premium end of the price range.

"As flash capacities continue to climb and the cost becomes effective, greater volumes of customers will begin to extend SSD technology to almost every layer of their data center, and in multiple flavors in order to fit within existing infrastructure," John Scaramuzzo, SanDisk senior vice president and general manager for enterprise storage solutions, told Network Computing.

Now SanDisk has addressed a major deficiency in the flash space by creating a sophisticated software stack of its own that recognizes problems with current layered storage stacks in database applications, which include up to seven address translations and a high level of system interrupts. SanDisk has developed a package that can speed up flash I/O by a big factor.

Hoping to capture a piece of the gig database and in-memory markets, which are projected to grow threefold over the next five years, SanDisk has created "ZetaScale," a set of key-data APIs that optimize storage access around any flash or SSD technology, including third-party hardware. It does, however, take advantage of proprietary internal features in SanDisk flash and drives for additional performance.

With ZetaScale, accesses to data use the key-data method. The APIs translate the key to determine where it is stored -- DRAM, DIMM, PCIe, SSD -- so the addressing structure is abstracted from the hardware. ZetaScale moves data objects around to optimize access performance, much like an automated tiering system. 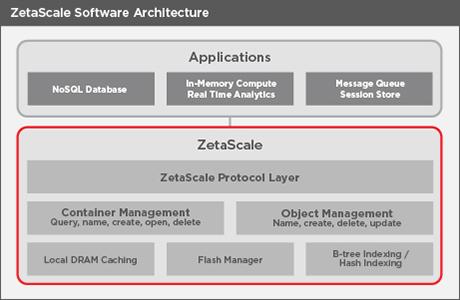 SanDisk boasts impressive results with ZetaScale. For example, it claims the open-source distributed database Cassandra is 2.6 times faster using SSD versus HDD, and that ZetaScale speeds things up an additional threefold. This translates into fewer servers for the same workload or, alternatively, better response time.

While Violin and SanDisk address enterprise needs -- one by adding enterprise-class features and the other by boosting performance -- the third part of the puzzle is the drop in storage farm costs created by the move to COTS hardware.

This is the year of COTS in the storage world. A number of new startups and some of the huge Chinese ODMs are entering the enterprise market with well-tested COTS hardware and either open-source or transportable software. The result should be a major expansion of vendor choices for storage, with big reductions in price per terabyte.

An example of the COTS approach is CohoData's MicroArray appliance, a modular storage system with solid-state and hard drives combined in small units. Coho uses an object storage interface and can scale to very large sizes. The company claims its product is almost 33% the price of traditional arrays.

Overall, this collision of features, performance, and price will put immense pressure on traditional storage suppliers over the next few years. Users should see much more bang for their buck, as long as they are willing to have an open mind on sourcing. Storage is more interesting than at any time in the last three decades, and IT users should pay attention to storage opportunities going forward.