Despite lingering cloud security fears, businesses are adopting cloud storage and file-sharing services at a rapid clip, according to new research from Spiceworks.

Eighty percent of the 544 organizations Spiceworks polled reported using cloud storage services, and another 16% say they plan to deploy them within the next two years. A similar study by the company in 2016 found that 53% of businesses were using these services.

Even though cloud storage and file-sharing services are becoming pervasive in the workplace, 25% of survey respondents believe their data in the cloud is not at all secure, or only somewhat secure. Sixteen percent of those polled said their organization has experienced one or more security incidents, including stolen credentials or data theft, via their cloud storage service in the last 12 months.

Less common security controls for cloud storage services include multi-factor authentication (28%) and encrypting data in transit (26%), according to the research.

The Spiceworks study also polled IT pros on their choice of cloud storage services vendor and found that Microsoft OneDrive has vaulted ahead of the competition in both the enterprise and the SMB markets. Among businesses with more than 1,000 employees, OneDrive's adoption rate was 59%, much higher than GoogleDrive (29%) and Dropbox (25%). Among small and midsize businesses with 100 to 999 employees, the adoption rate for OneDrive was 54% compared to 35% using Dropbox and 33% using Google Drive.

"It’s evident that in a matter of two years, OneDrive has stolen the top spot from Dropbox as the most commonly used cloud storage service in the business environment," Peter Tsai, senior technology analyst at Spiceworks, wrote in a  blog post.

In 2016, Spiceworks research found that 33% of organizations were using Dropbox, 31% were using OneDrive, and 27% were using Google Drive. An additional 18% of businesses planned to adopt OneDrive.

Tsai surmised that OneDrive's popularity is connected to the fact that it's bundled with an Office 365 subscription, which many organizations have. A separate Spiceworks study found that more than 50% of companies subscribe to Office 365.

When buying cloud storage services, IT buyers put a priority on security, according to Spiceworks. Ninety-seven percent of survey respondents ranked it as an important or extremely important factor, followed closely by reliability at 96%. 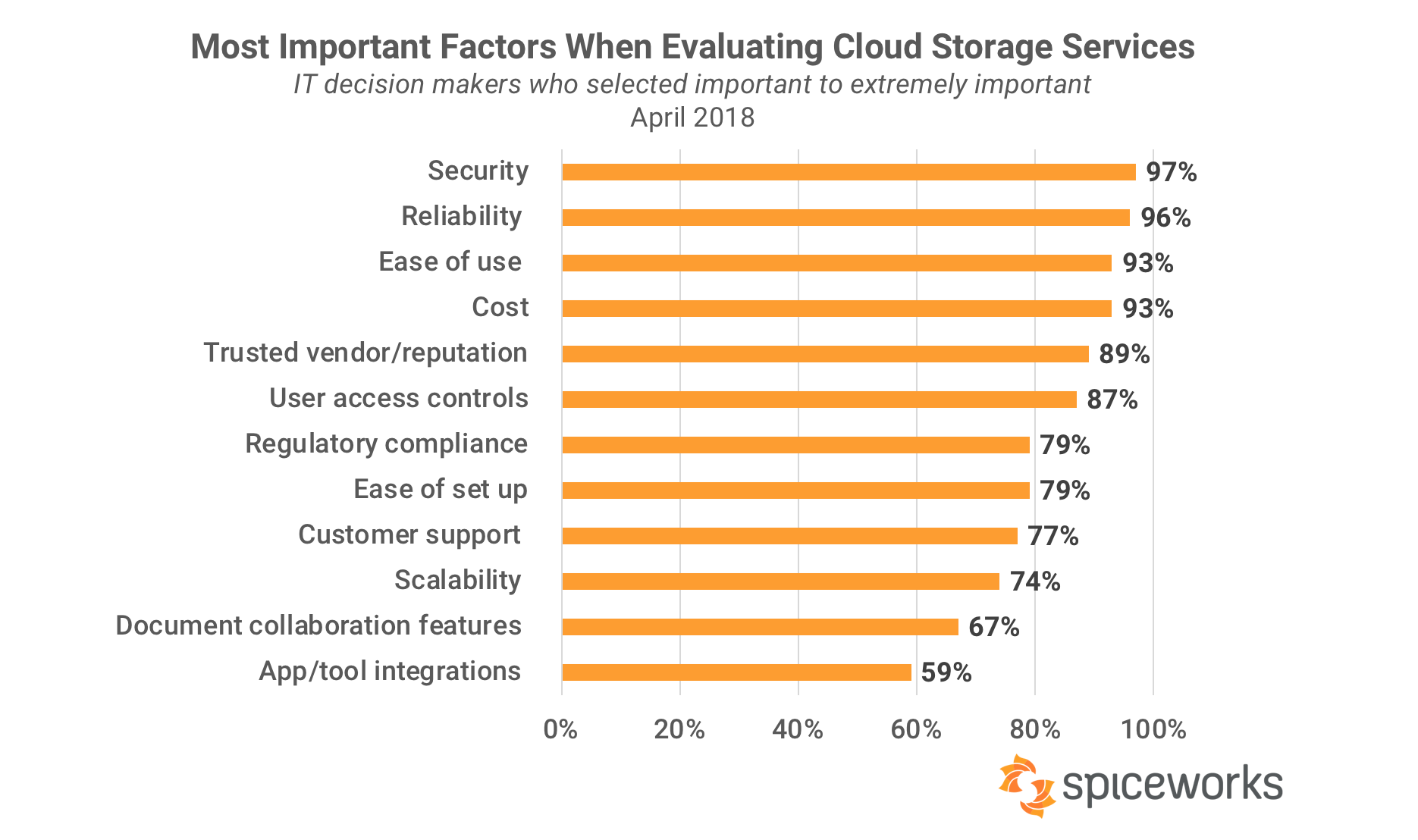 Interestingly, 39% of those polled said security is the attribute they most closely associate with OneDrive, compared to Google Drive (28%) and Dropbox (19%). In terms of reliability and cost effectiveness, Google Drive led the pack. Dropbox got the highest ranking for ease of use.

According to the Spiceworks report, Dropbox also wins out when it comes to cloud storage services unsanctioned by the IT department.

The Spiceworks survey polled IT pros in the company's network; they represent a variety of company sizes and industries.