Building a Lab: Patching and Cables

Patch panels and cables aren't glamorous, but a sensible layout makes a solid foundation for a data center or lab. Here's how I put together my patch and cabling system.
Howard Marks

I recently moved my consulting business to Santa Fe, and I'm building a small data center lab in my new location. This post will cover the patch panels and cabling process. Before you roll your eyes and click away, I'll ask you to bear with me.

In my consulting life, I've worked in the data centers large and small. Unfortunately, too many of them were designed by people who knew servers, storage and networking, but had only a passing knowledge of the physical infrastructure that supports all that tech.

My previous lab in New Jersey had no patching facilities, so we ran cables directly from once device to another. While this might make sense for a static environment with top-of-rack switches, in the dynamic environment of a test lab it resulted in chaos. That's why a patching facility was high on my list for things to do right in the new lab.

Most of the network connections in the lab are either 100 or 1000Base-T, so we could have installed a Category 5 copper patching system and relied on fiber optic connections for anything faster than 1 Gbps. However I am, as I've written before, waiting with baited breath for the day when I can run 10Gbase-T in the lab. That means our copper patch system had be Category 6A so I could use it to connect my 10Gbase-T kit when it arrives.

[If cables aren't to your taste, how about building your own storage? Check out DIY Storage: Why I Built My Own SAN for details on putting together a low-cost array.]

The fiber decisions were easier. I could, as some of my telco friends would recommend, have installed fusion-spliced, single-mode optical cable. However, given that the longest cable run in the lab is less than 20 meters, the extra cost of single-mode cable, and especially optics, didn't make any sense. Luckily all the latest networking gear runs great on OM4 multimode cable, so we'll be using the pretty aqua stuff. 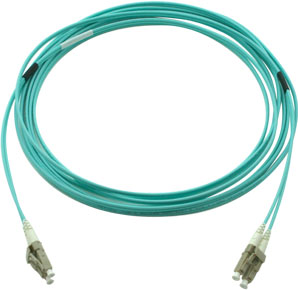 Next I had to figure out how I was going to connect the panels. In general, I prefer using factory-made modular gear rather than terminating cables in the field because it makes the installation go a lot faster. You also don't have to have a top-notch installer because the components are all pre-tested. Because I was building the new lab in a city where I didn't know a good cable guy, I was definitely going modular. We could install the modular system in a day or two and I could be sure that each and every connection was up to spec.

In the old days, when Cat 5 was good enough, I would've used patch panels with CHAMP or RJ-21X connectors and 25-pair cables. Designed by the boys at Bell to connect up Peggy Olsen's six-line desk phone, the roughly 21X connector, and the 25-pair cable it used, is just too electrically noisy for a modern network. Thus, vendors had to get innovative when building pre-terminated Cat6 and Cat6A systems.

Once again, things were a bit easier on the fiber end. I used standard fiber ribbon cables and one little MPO connector to connect 12 strands of fiber in a snap. Many vendors make modular fiber patching systems similar to the Commscope Systimax 360 we ended up using. Each module has 12 or 24 LC ports on the front side and two to four MPO connections on the back. A steel frame in the rack holds four or more modules. The 12-strand MPO cables between them, while only about as bulky as a Cat6 cable, carry six times as many connections. 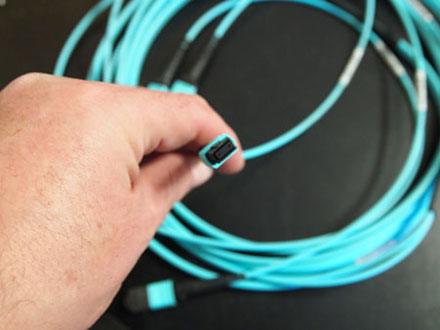 Vendors such as Siemon and Belden base their pre-terminated copper patch systems on individual cables, with the familiar RJ-45 connectors and patch panels with openings for keystone jacks. In some systems the cables come with keystone jacks attached, while others use plugs on the cables and inline couplers in the patch panels.

Other vendors, including Tyco Electronics (formerly AMP), Commscope and Molex, went with a cassette-based system. A cassette holds, depending on the vendor, between four and eight RJ-45 jacks on the front end. Some vendors, such as HellermannTyton, ship cables pre-terminated to cassettes, while most use an essentially proprietary connector on the back of each cassette. Because the cassettes are pretty big, snaking them through the cable routing holes in most server cabinets is a pain, especially as they fill up with cables, so we prefer the connectorized versions.

Regardless of which cassette system you use, you order the cable lengths you need to the nearest foot and just plug everything together. A few vendors, including Panduit and HellermannTyton, will ship cables with a cassette at one end and RJ-45 plugs at the other. This would let you skip the patch panel in the server rack by presenting server ports directly to the panel in the switching rack.

The Commscope Systemax product we ended up with has four ports per module and bundles its standard four-pair Cat6A cables into proprietary connectors. The resulting trunk cables are stiff, but the whole system for our lab snapped together pretty quickly.

Having lived with both good and mediocre patching systems, I can tell you that the right patch system not only makes working in the data center easier, it also improves reliability by reducing the chance someone will unplug the wrong cable. For more details on the lab, see my DeepStorage blog here.

Disclaimer: Commscope provided the patching infrastructure and new server cabinets for the lab for free..