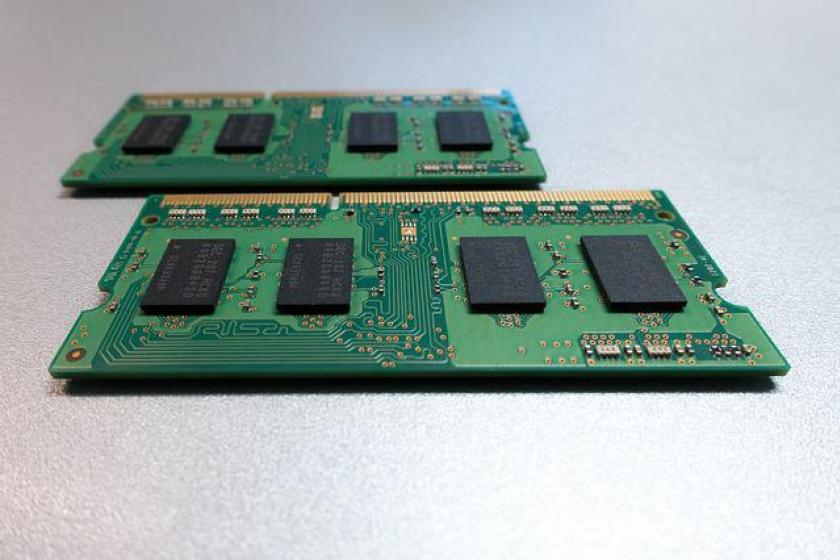 Exponential data growth and increasing application processing demands are driving the need for a new memory model that can support “big and fast” data that is often larger than memory. A wide range of modern data-intensive workloads requires an ecosystem that goes beyond DRAM and storage class memory (SCM) to “Big Memory.” This memory evolution has been marked by many milestones along the way, including standards such as DDR5, PCIe 5.0, and NVDIMM-P, which supply the bandwidth and other attributes needed to take advantage of big memory performance.

Now what is needed is memory virtualization, composable infrastructure standards, and compliant components to turn this big memory into a fabric-attached pool that can be allocated and orchestrated much like containers are today. Persistent memories are now shipping in production volumes from multiple sources. At present, they are primarily being applied in embedded solutions and in a narrow set of high-value use cases. However, the time has come for enterprise technologists to begin planning their technology refreshes around a composable, data-centric, big memory architecture.

Organizations are capturing data from more sources and in a greater variety of file sizes than in the past. As resolutions increase, so do working set sizes. Consider that an 8K camera can generate up to 128 Gbps of data. That is nearly 1 TB per minute. Producing a feature film can easily require 2PB+ of storage capacity.

The expanded use of structured and especially unstructured data has created new dimensions of scalability that go beyond mere capacity. Organizations across many industries are seeking to use the data they capture in new and varied ways. These include using AI-enabled video analytics to optimize retail operations or traffic flows in a city and using in-depth analysis of high-resolution microscopy images to improve healthcare.

Many enterprises are now running workloads that until recently were the domain of academic and scientific high-performance computing (HPC) environments. In the process, these organizations are running into infrastructure performance limits on multiple fronts, including compute, network, storage performance, or memory.

DRAM is Stretched to its Limits

Although successive generations of the DDR specification have increased the performance of DRAM, these advances have not kept pace with advancements in CPUs. Since 2012 CPU core counts have tripled, but bandwidth per CPU core has declined by 40%.

DRAM capacities have also stagnated. The advances in DRAM capacity that have been achieved come at a high cost per bit, such as seen in HBM (High Bandwidth Memory.)

The Decades-long Search for Next-Generation Memory

Key infrastructure providers such as Intel, IBM, Micron, and Samsung have long recognized that DRAM technology was reaching its limits in terms of both capacity and bandwidth. Thus, these companies have for decades been exploring alternate memory technologies. These technologies include MRAM, FRAM, ReRAM, and PCM. For a long time, these research efforts did not make it out of the lab and into general availability. That has changed.

Today multiple providers are shipping what is popularly called "storage class memory" in production volumes. These memories are coming from multiple major chip foundries, including TSMC, Samsung, Global Foundries, and others. 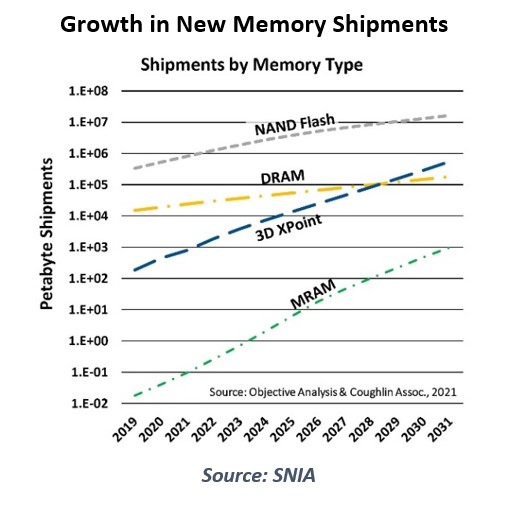 A key attribute of all storage-class memories is that they are persistent. Unlike DRAM, the data stored in SCM stays in memory even if the system is powered off. In that regard, SCM is storage, like an SSD or thumb drive.

Another key attribute of SCM is the “M.” It is a memory technology. CPUs and other data processing units can communicate with SCM using load/store memory-semantics. These move data with minimal overhead and latency compared to disk-oriented protocols. Memory-semantics also enable efficient, fine-grained data access through byte-addressability.

Solution providers are currently using MRAM primarily in embedded devices, so we won’t be loading up our PC’s memory slots with MRAM anytime soon. However, providers are incorporating Intel Optane (typically 16 GB or 32 GB modules) into desktop PCs and laptops to accelerate initial boot times and launch times for individual programs.

In the data center, Intel's Ice Lake datacenter CPU, announced in April 2021, offers up to 6 terabytes of system memory composed of DRAM plus Optane Persistent Memory (PMem). This expanded memory capacity is teamed with up to 40 CPU cores and up to 64 lanes of PCIe Gen4 per socket. This represents a 33% increase in memory capacity and a 250% increase in I/O bandwidth.

The Need for Big Memory

As an example of the difference more memory can make, Intel tested start times for a 6TB SAP HANA database on the new system with PMem compared to a prior generation system that did not include PMem. Both systems had 720 TB of DRAM. The PMem-equipped system started in 4 minutes instead of 50 minutes, a 12.5x improvement.

Even in the example cited above, Intel loaded the data into memory from an I/O device, in this case, an NVMe SSD over the PCIe interface. Four (4) minutes is certainly better than 50 minutes, but if you are editing a movie, that is long enough to disrupt the creative flow. That flow may take more than an hour to recover. When persistent memory is available to a process and is bigger than the working set, recovery can be nearly instantaneous.

Storage class memory provides a much-needed boost in performance when integrated into a data center environment. By itself, however, it is not sufficient to deliver big memory that meets the performance demands of many real-time high-value applications or to enable the next wave of workload consolidation.

Instead, we need a new memory infrastructure built around a new memory reality. The DRAM era of memory—volatile, scarce, and expensive—is drawing to a close. It is being replaced by the era of big memory—large, persistent, virtualized, and composable. The big persistent memory era is upon us.

Some aspects of this era are inherent to the technology. It is big (relative to DRAM) and persistent by design. It is just now beginning to open up a new set of opportunities to create value. For example, a narrow set of high-value applications are already taking advantage of these attributes to accelerate discovery in the research center and reduce fraud in the financial industry.

We are still in the early phases of a persistent-memory-enabled revolution in performance, cost, and capacity that will change server, storage system, data center, and software design over the next decade. Nevertheless, multiple vendors are now shipping storage class memory as part of their enterprise storage systems. The new memory ecosystem is falling into place, and the memory revolution has begun.

We humans tend to overestimate short-term impacts and underestimate long-term impacts. Today, we are at the turning of the tide for big memory computing. The time has come for enterprise technologists to look for high-value tactical wins today and to begin planning infrastructure refreshes around a composable, data-centric, big memory architecture.

Ken Clipperton is the Lead Analyst for Storage at DCIG.