Cage nuts aren't the only option for mounting IT gear to racks. Find out about alternatives such as MonoSerts and Rackstuds, plus a handy cage nut tool if you want to stick with traditional hardware.
Howard Marks

With my missive on cage nuts, I thought I had said just about everything there was to say about the hardware that mounts our IT gear to racks and cabinets. As it turns out, thinking that I had written a definitive work, even on such a humble subject as the cage nut, was an act of hubris the universe had to punish by letting me know about alternatives I hadn't mentioned.

In this installment of "How the Cage Nut Turns" (although you never actually want a cage nut to turn in your cabinet), I'll look at several alternatives to traditional cage nuts as well as Star Case's cage nut tool.

Star Case tool
Star Case, which by the way makes very nice portable racks and rack travel cases, created some sort of Dr. Moreau-like hybrid of a spring steel cage nut insertion tool and a screwdriver to create the heavy-duty insertion tool you see below.

You use the Star Case tool pretty much the same way you'd use the little spring tool, hooking one side of the cage nut on the cabinet rail, then using the slot at the end of the tool to grab the other tab on the cagenut and drag it through the rail. Since the Star Case tool is a lot thicker than the spring tool, you can't just pull it straight through the rail, but have to twist and maneuver a little to seat the cagenut and extract the tool.

I think the spring tool is easier to use, but then again I have lots of practice with it. The Star Case tool is easier than using the toenail clipper of death for installation and a lot easier on the fingers than forcing the cage nuts in with your bare hands. It's also a lot less likely to be lost, or thrown out, than the lowly spring tool. Leave it in the data center and your boss might throw it in the screwdriver drawer when he goes on one of his periodic cleanup rampages; he might just toss the spring tool.

MonoSerts and DuoSerts
As we've seen, if you have the right tools and practice just a little, it's not that hard to install and remove cage nuts if you can get to the back side of the cabinet's rails. However, that makes it hard to reconfigure cabinets when in a changing data center. The designers of Southco's MonoSert and DuoSert set out to create a cage nut replacement that could be installed and removed from the front side of the rail.

The MonoSert is essentially a spring steel version of the plastic wall anchors uses to mount light things, such as thermostats to drywall. The MonoSert snaps in from the front of the cabinet's rails with its two legs against the right and left sides of the hole. When the screw is inserted, it engages the back of the legs, which forces them out against the sides of the rail hole.

The downside to the MonoSert is that it's just a piece of spring steel, so it only engages with one or two threads on the screw. As a result, MonoSerts should only be used for lightweight loads because while the MonoSert may stay in your rack, the screw could strip the hole if there's enough weight on it. 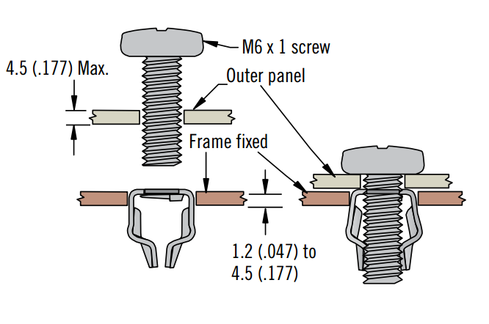 MonoSert expands as the screw is installed.

For heavier loads, Southco offers the DuoSert, a nut with a retainer spring, much like a cage net. To use the DuoSert, you're supposed to insert it from the front with the tabs facing the sides, and then use a screwdriver to rotate the spring retainers into the corners of the hole a 45-degree rotation. Like heavy duty clip nuts, this puts the 3/8" square nut in the 3/8" square hole, so there's a lot of support for heavy gear.

Amazingly enough, MonoSert and DuoSert have been on the market for 20 years, but no one knows about them. The folks at Southco sent me samples of both. I really like the MonoSerts. They were easy to install, easy to use, and not that hard to take out. The biggest drawback is that they only come in M6 threading, not the 10-32 we use in DeepStorage Labs. The DouSerts were less cool than they first appeared; twisting the insert to lock it in was a lot harder than it should have been.