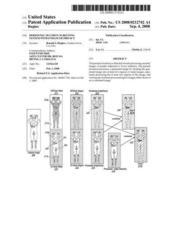 Are we saying goodbye to another supposed airline security silver bullet?

According to a recently published study, when it comes to the backscatter X-ray body scanners being rolled out in airports, "detection of contraband can be foiled in these systems."

So say Leon Kaufman and Joseph W. Carlson, both former professors of physics at the University of California at San Francisco, in a recent paper published in the Journal of Transportation Security.

According to the researchers, airport body scanners typically record two views of a subject: front and back. But current scanner resolution doesn't appear able to distinguish high-density explosives from tissue in either pose. For example, the researchers estimate that to accurately detect dangerous TAPT (acetone peroxide), given current pixel noise levels, a machine would have to take 46 exposures by one measure, and 730 by another. Even more exposures would be required to detect pentaerythritol tetranitrate (PETN), which is similar to nitroglycerin.

According to the report, "even if exposure were to be increased significantly, normal anatomy would make a dangerous amount of plastic explosive with tapered edges difficult if not impossible to detect."

Furthermore, the report assumes that machines will be operating at 100% efficiency, but that's unlikely, said the researchers. "For the kind of technology in use in this market, heavily influenced by number of units and budget, and little influenced by competitiveness and performance, the efficiency may easily be 50%."

What could sneak by scanners? Try a half-pound of PETN -- as they note, it's "easily picked up in a competent pat down" -- or 40 grams of PETN, which could be pancaked to the point where it's invisible to detectors. In other words, whatever else they do, don't expect full body scanners alone to stop explosives.