Editor's note: This is a chapter excerpt from "Designing and Deploying 802.11 Wireless Networks," by Jim Geier and published by Cisco Press.

As the basis for understanding the installation, operation, and troubleshooting of wireless LANs (WLANs), it is important that you have a good knowledge of how radio waves propagate through an environment. Every Wi-Fi deployment requires that the systems engineer understand the fundamentals of how radio waves move and react within the environment.

For example, in a WLAN, radio waves carry information over the air from one point to another. Along the way, the waves encounter various obstacles or obstructions that can impact range and performance, depending on the characteristics of the radio wave. In addition, regulatory rules govern the use and limitations of radio waves. This excerpt explains the fundamentals of radio waves so that you have a good basis for understanding the complexities of deploying WLANs.

A radio wave is a type of electromagnetic signal designed to carry information through the air over relatively long distances. Sometimes radio waves are referred to as radio frequency (RF) signals. These signals oscillate at a very high frequency, which allows the waves to travel through the air similar to waves on an ocean. Radio waves have been in use for many years. They provide the means for carrying music to FM radios and video to televisions. In addition, radio waves are the primary means for carrying data over a wireless network. As shown in Figure 2-1 , a radio wave has amplitude, frequency, and phase elements. These attributes may be varied in time to represent information.

The amplitude of a radio wave indicates its strength. The measure for amplitude is generally power, which is analogous to the amount of effort a person needs to exert to ride a bicycle over a specific distance. Similarly, power in terms of electromagnetic signals represents the amount of energy necessary to push the signal over a particular distance. As the power increases, so does the range.

Radio waves have amplitudes with units of watts, which represent the amount of power in the signal. Watts have linear characteristics that follow mathematical relationships we are all very familiar with. For example, the result of doubling 10 milliwatts (mW) is 20 mW. We certainly do not need to do any serious number crunching to get that result.

As an alternative, it is possible to use dBm units (decibels referenced to 1 mW) to represent the amplitude of radio waves. The dBm is the amount of power in watts referenced to 1 mW. Zero (0) dBm equals 1 mW. By the way, the little m in dBm is a good reminder of the 1 mW reference. The dBm values are positive above 1 mW and negative below 1 mW. Beyond that, math with dBm values gets a bit harder. Refer to the section “RF Mathematics,” later in this chapter, to learn how to convert between watts and dBm units and understand why it is preferable to use dBm units.

The phase of a radio wave corresponds to how far the signal is offset from a reference point (such as a particular time or another signal). By convention, each cycle of the signal spans 360 degrees. For example, a signal might have a phase shift of 90 degrees, which means that the offset amount is one-quarter (90/360 = 1/4) of the signal.

Figure 2-2 illustrates a basic RF system that enables the propagation of radio waves. The transceiver and antenna can be integrated inside the client device or can be an external component. The transmission medium is primarily air, but there might be obstacles, such as walls and furniture.

A key component of a WLAN is the RF transceiver, which consists of a transmitter and a receiver. The transmitter transmits the radio wave on one end of the system (the “source”), and the receiver receives the radio wave on the other side (the “destination”) of the system. The transceiver is generally composed of hardware that is part of the wireless client radio device (sometimes referred to as a client card).

Figure 2-3 shows the basic components of a transmitter. A process known as modulation converts electrical digital signals that represent information (data bits, 1s and 0s) inside a computer into radio waves at the desired frequency, which propagate through the air medium. Refer to the section “RF Modulation” for details on how modulation works. The amplifier increases the amplitude of the radio wave signal to a desired transmit power prior to being fed to the antenna and propagating through the transmission medium (consisting primarily of air in addition to obstacles, such as walls, ceilings, chairs, and so on).

RF modulation transforms digital data, such as binary 1s and 0s representing an e-mail message, from the network into an RF signal suitable for transmission through the air. This involves converting the digital signal representing the data into an analog signal. As part of this process, modulation superimposes the digital data signal onto a carrier signal, which is a radio wave having a specific frequency. In effect, the data rides on top of the carrier. To represent the data, the modulation signal varies the carrier signal in a manner that represents the data.

Modulation is necessary because it is not practical to transmit data in its native form. For example, say that Kimberlyn wants to transmit her voice wirelessly from Dayton to Cincinnati, which is about 65 miles. One approach is for Kimberlyn to use a really highpowered audio amplifier system to boost her voice enough to be heard over a 65-mile range. The problem with this, of course, is that the intense volume would probably deafen everyone in Dayton and all the communities between Dayton and Cincinnati. Instead, a better approach is to modulate Kimberlyn’s voice with a radio wave or light carrier signal that’s out of range of human hearing and suitable for propagation through the air. The data signal can vary the amplitude, frequency, or phase of the carrier signal, and amplification of the carrier will not bother humans because it is well beyond the hearing range.

The latter is precisely what modulation does. A modulator mixes the source data signal with a carrier signal. In addition, the transmitter couples the resulting modulated and amplified signals to an antenna, which is designed to interface the signal to the air. The modulated signal then departs the antenna and propagates through the air. The receiving station antenna couples the modulated signal into a demodulator, which derives the data signal from the signal carrier.

One of the simplest forms of modulation is amplitude modulation (sometimes referred to as amplitude-shift keying), which varies the amplitude of a signal to represent data. Figure 2-5 illustrates this concept. Frequency-shift keying (FSK) is common for lightbased systems whereby the presence of a 1 data bit turns the light on and the presence of a 0 bit turns the light off. Actual light signal codes are more complex, but the main idea is to turn the light on and off to send the data. This is similar to giving flashlights to two people in a dark room and having them communicate with each other by flicking the flashlights on and off to send coded information.

Amplitude modulation alone does not work very well with RF systems because there are signals (noise) present inside buildings and outdoors that alter the amplitude of the radio wave, which causes the receiver to demodulate the signal incorrectly. These noise signals can cause the signal amplitude to be artificially high for a period of time; for example, the receiver would demodulate the signal into something that does not represent what was intended (for example, 10000001101101 would become 10111101101101). To combat impacts from noise, modulation for RF systems is more complex than using only amplitude modulation. 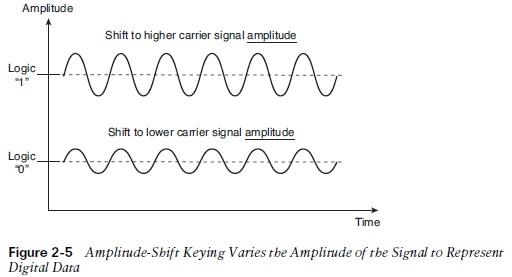 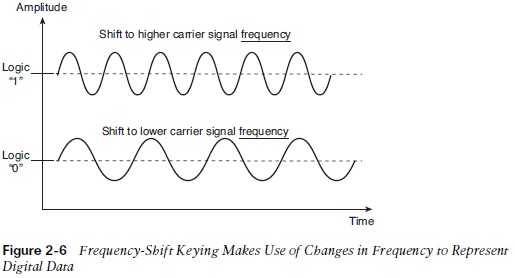 Some systems use phase-shift keying (PSK), which is similar to FSK, for modulation purposes for low to moderate data rates. With PSK, data causes changes in the signal’s phase, while the frequency remains constant. The phase shift, as Figure 2-7 depicts, can correspond to a specific positive or negative amount relative to a reference. A receiver can detect these phase shifts and realize the corresponding data bits. As with FSK, PSK is mostly immune to common noise that is based on shifts in amplitude. 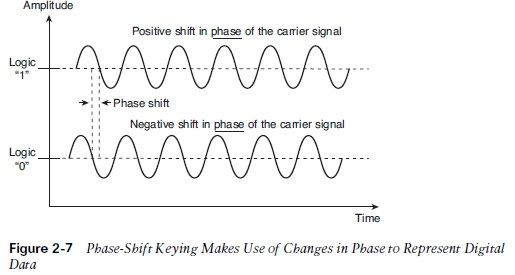 Quadrature amplitude modulation (QAM) causes both the amplitude and phase of the carrier to change to represent patterns of data, often referred to as symbols. The advantage of QAM is the capability of representing large groups of bits as a single amplitude and phase combination. In fact, some QAM-based systems, for example, make use of 64 different phase and amplitude combinations, resulting in the representation of 6 data bits per symbol. Higher-order combinations of phase and amplitude in QAM make it possible for standards such as 802.11n and 802.11ac to support higher data rates.

After modulating the digital signal into an analog carrier signal using FSK, PSK, or QAM, some WLAN transceivers spread the modulated carrier over a wider spectrum to comply with regulatory rules. This process, called spread spectrum , significantly reduces the possibility of outward and inward interference. As a result, regulatory bodies generally do not require users of spread spectrum systems to obtain licenses. Spread spectrum, developed originally by the military, spreads a signal’s power over a wide band of frequencies (see Figure 2-8 ).

Frequency hopping uses a different technique to spread the signal by quickly hopping the radio carrier from one frequency to another within a specific range. Figure 2-10 illustrates this concept. The boxes labeled A, B, C, D, and E in the figure represent bursts of data that are sent at different times and frequencies. This also effectively spreads the signal across a wider part of the spectrum. 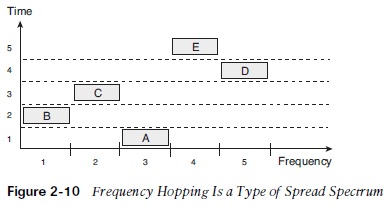 Instead of using spread spectrum, higher-speed WLANs make use of orthogonal frequency- division multiplexing (OFDM). OFDM divides a signal modulated with FSK, PSK, or QAM across multiple subcarriers occupying a specific channel (see Figure 2-11 ). OFDM is extremely efficient, which enables it to provide the higher data rates and minimize multipath propagation problems. OFDM has also been around for a while, supporting the global standard for asymmetric digital subscriber line (ADSL), a high-speed wired telephony standard.