Despite the significant enhancements with cellular wireless, good and reliably indoor coverage has long illuded many enterprises.

Poor RF signal penetration indoors using outdoor carrier macro cells and the variability of signals based on the materials unfriendly to wireless communications used for construction have been a constant challenge that enterprises have been long looking to overcome.

However, the emergence of small cells and new shared spectrum options, such as Citizen’s Broadband Radio Service (CBRS) in the US, have now paved the way for a new model that delivers network coverage and capacity from participating mobile network service providers across private LTE/5G infrastructures. This model is known as a neutral host.

Neutral host networking involves a third-party wholesale carrier offering its network to be transmitted and accessed from a certified private LTE/5G network. Basically, a private LTE/5G network deployed using a shared cellular spectrum, such as CBRS, can provide service to mobile subscribers from one or more MNOs.

This extends the MNO cellular service across the private LTE/5G network coverage area. As a result, CBRS LTE, and soon 5G, are being viewed as an ideal way to support not only enterprise-managed devices but also a myriad of  BYOD and visitor/customer cellular devices.

New CBRS networks that can accommodate users with subscriptions from different operators treating these networks to be the same as their home network are considered to be a neutral host network. These subscriptions can belong to a carrier or a private enterprise network operator.

Reducing the cost and complexity of indoor cellular

The neutral host model is a new approach that radically reduces cost and complexity by allowing private cellular access points operating in the private cellular spectrum (e.g., CBRS in the US) to be deployed and connected over an existing enterprise local area network (LAN). In this scenario, carrier traffic is automatically offloaded and securely tunneled over that site's broadband connection(s) to the respective mobile network operator (MNO).

Compared to conventional approaches, neutral host networks offer a myriad of advantages to enterprises, MNOs, and subscribers alike, such as:

How it all works

With a neutral host, each MNO permits the use of its own licensed spectrum for bandwidth by enterprise small cell access points. The MNO retains full control of their own wireless services as core network functions and services like IP multimedia subsystem (IMS) are derived and managed from the MNO’s existing network. Connectivity between the private LTE/5G network and the MNO network is accomplished through a mobile operator core network (MOCN) gateway that securely tunnels traffic from the enterprise 5G LAN to the respective MNO core.

The neutral host network provides all the critical KPIs to MNOs. By leveraging the CBRS band as a common shared spectrum for indoor access, a portion of the private cellular bandwidth can be allocated for MNO use. This eliminates the need to use separate infrastructure equipment, which would have been designed to propagate licensed MNO spectrum with careful (and expensive) customization of the radio network. 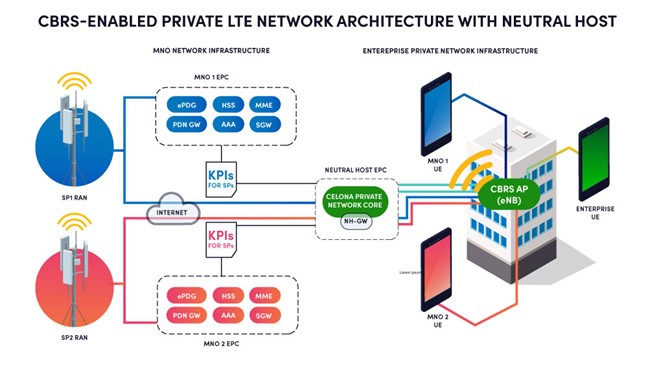 Most smartphones and LTE devices manufactured in the last three years are natively compatible with networks that operate in the 3550 to 3700 MHz CBRS frequency range in the United States. Many if not all of these devices support international private spectrum options as well.

Not only can this frequency spectrum be used for private mobile network purposes, but a defined portion of the available bandwidth can also be used to advertise public MNO networks. This means that any CBRS-capable device with a public carrier SIM can connect to the private cellular wireless network and continue to access the MNO network services natively – as if it were connected to a public MNO cell tower. No other free-to-use spectrum can accomplish this feat today.

Roaming onto a Neutral Host Network (NHN) leverages the same cellular principles and procedures as roaming onto another RF band of a given operator’s network.

A user device first discovers a neutral host network by automatically scanning the CBRS frequency band for a network broadcasting one or more network identifiers.

Once devices provisioned with the requisite information for the participating service provider roam onto a neutral host network, they are authenticated by that MNO’s core network with the provisioned SIM credentials provided by the MNO. The data connection subscribed to the device is supported on the secure tunnel established between NHN and MNO.

Neutral host networks represent a viable new option for “greenfield” deployments where there is no existing DAS in place, or the existing DAS is end-of-life.

They can also be designed and deployed to complement existing DAS environments by providing additional cellular capacity and coverage using the CBRS band and the existing enterprise network infrastructure to connect to MNO networks.

As a result, neutral host networking is poised to be the killer application for enterprise adoption of private LTE and 5G technology both now and in the future.