Cloud-Managed WiFi For The SMB

The cloud-managed WiFi paradigm has an appeal that isn’t always affordable to tight WiFi budgets. Many small businesses run their wireless networks on consumer-grade hardware out of budgetary necessity, and could benefit from the feature-rich and far-reaching cloud-managed model, but the technology is typically beyond what their budgets can support. Two startups are looking to change that.

However, before we talk about what they're doing, let’s look back a bit. In 2011, I wrote about a startup called PowerCloud. The company made a go at turning off-the-shelf D-Link consumer-grade wireless access points into something more with proprietary software. What seemed like an odd idea at the time paid off in 2014 when telecommunications giant Comcast acquired PowerCloud as part of its strategy to build a nationwide WiFi network. Given this history, it’s little wonder that someone else would try to make cheap access points into something more with code.

Tanaza is an Italian startup with global reach that claims to have developed the first and only multi-vendor software to easily manage WiFi access points via the cloud. Its list of supported hardware reads like a "Who’s Who” of consumer wireless devices. Tanaza’s software reinvents access points from TP-Link, Netgear, D-Link, MikroTik and others with a feature set that includes inter-AP roaming (regardless of AP brand), captive portal with social logins, up to 8 SSIDs, Internet-based monitoring and management -- and if you buy into the notion -- infinite scaling. Tanaza resources are hosted in the Amazon cloud, and the company has a certification program for VARs and integrator partners. 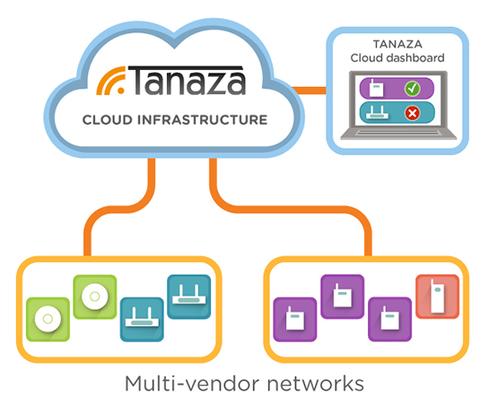 UK-based startup Cucumber Tony competes with Tanaza in the same general market and makes similar promises, although it's  just starting to “come out” globally. Cucumber Tony doesn’t support quite as many cheap access points as Tanaza does, but the software platform lets you load new code onto some enterprise APs from Aruba, Meraki, and Xirrus (many of these end up on eBay on the cheap after enterprise upgrades to newer models).

It also makes a point of calling out more enterprise-like features such as bandwidth management and content filtering. Cucumber Tony offers four service plans including a free option to let you kick the tires (providing you have any of the supported devices) before you spend money on the SaaS model.

I find both Tanaza and Cucumber Tony to be fascinating in concept. I personally administer my share of cloud-enabled network environments from big WLAN players, and I’m a devout believer in the cloud-managed WiFi paradigm. I also know several small integrators who make a living putting in the low-end WiFi devices that both Tanaza and Cucumber Tony promise to breathe new enterprise-quality life into, so I know there will be interest in both companies as their names get out there.

It should be obvious that neither Tanaza nor Cucumber Tony have manufacturing costs or hardware engineering concerns. Given that both companies are somewhat following in the footsteps of PowerCloud, it’s safe to say that it looks like a new WLAN industry niche is taking hold. But whether either company or both will survive long term will depend largely on how their pricing models are received, the quality of their code, how their support teams engage customers when trouble or questions hit, and whether their services truly can live up to the promise of repurposing cheap gear into something more.

PowerCloud was a white-box Wi-Fi success story in which the software was more important than whatever almost-generic AP it landed on, so there is encouraging precedent. At the same time, while bantering about Tanaza and Cucumber Tony with other WiFi professionals, I’ve heard skepticism and derision about the possibility of such lowly hardware ever competing with the beefy, pricey components that “real” WLAN networks are built on.

I don’t put a lot of stock into what the purists say as I’ve learned innovation can come from surprising places, but Tanaza and Cucumber Tony will have to overcome this skepticism if they want the decent-sized partners they’ll need to push their frameworks.