Why Ethernet Switch Sales Will Continue To Fall

Sales of Ethernet switches will continue to slump as customers wait for SDN and as virtualization and public cloud adoption reduces Ethernet port requirements.
Greg Ferro

Dell’Oro Group recently released research that showed Ethernet switch revenue fell by nearly $1 billion in the first quarter of 2014. There are many drivers for this change: software-defined networking (SDN), hypervisors, virtualization, containers, cloud orchestration, public cloud and more. Let's take a look at these drivers and why the Ethernet switch market is headed on an irrevocable downward course.

The impact of SDN and white box
SDN strategies have led to uncertainty for network architects, with the result that many companies are wisely suspending long-term investments and delaying most purchases. Cisco ACI has been marketed aggressively to tease customers into waiting to see what Cisco will do and this has undoubtedly further slowed sales momentum.

The campus network, where SDN has not yet reached, is in continual decline as wireless networking replaces wired Ethernet. The rise of notebooks, tablets, and smartphones means that existing networks have limited growth prospects.

The impact of white-box Ethernet is harder to measure, but the growth market of cloud providers are turning to low-cost OEM switches for 10GbE. More generally, public cloud is replacing new purchases for corporations and enterprises in the near term, which further reduces demand. While white box adoption in the enterprise remains uncertain, the campus is highly susceptible to low-cost replacement.

Calculating the decline
I have the view that the largest Ethernet switch decline is in the enterprise data center. Most IT teams have adopted VMware ESX or Linux KVM to reduce the number of physical servers. With less physical servers, there are less switch ports needed, but there are some underlying shifts.

Let's take a typical infrastructure team in 2004 with 400 instances of operating systems on bare metal, which would require 400 servers, each with 2 GbE x 1 GbE ports for redundancy. Thus, a total of 800 ports were needed.

In the next five years, assume that the number of operating systems/servers has doubled to 800 instances. In 2009, the average server-to-VM ratio was roughly five, which means around 160 or so servers. At that time, it was common to have at least 6 GbE x 1 GbE ports used in three redundant pairs for vKernel, network and admin functions. The total port count increased a little, but switch sales remained sound as customers upgraded from 100 MB to 1 GbE.

Fast forward to 2014, where virtualization is reaching much higher acceptance and much higher server-to-VM ratios. The same company has likely doubled the VMs to 1,600 but reduced the number of servers to 40 with a server-to-VM ration of 40:1. Those 40 servers will be likely to have 4 GbE x 10 GbE for a total of 160 ports. 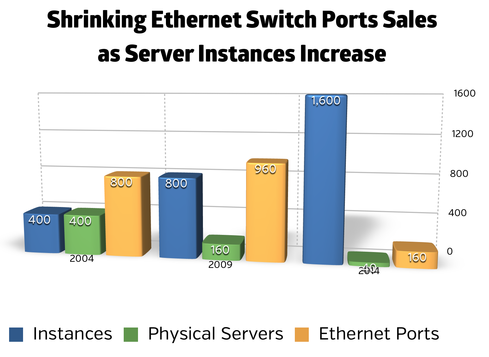 If you are a Cisco UCS or HP Cloud Matrix buyer, then these numbers are even further reduced. The use of blade chassis may have stopped growing, but they use even less Ethernet ports; eight blades often share just 4 GbE x 10 GbE ports as opposed to 16 for rack-mount servers.

Why it will get worse
The upcoming State of The Data Center 2014 survey from Information Week shows that virtualization still has a long way to travel, which doesn't bode well for future Ethernet switch sales. The survey results suggest that roughly half of enterprise servers have been virtualized. More than 15% of companies have achieved 90% virtualization already. 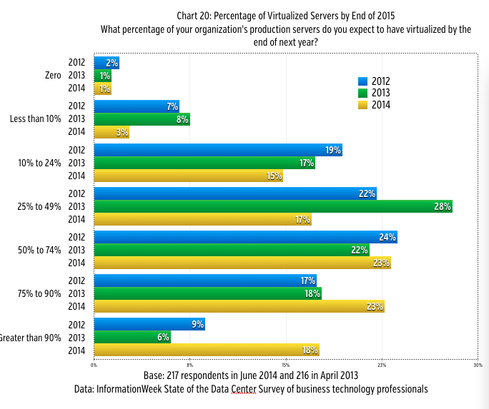 Six Ethernet switches should cover it
The math and numbers are pretty rough in this example. The actual switch port counts would be much higher in 2004/2009 since there are more switches required for the core/distribution layers in the network. But in 2014, 192 ports of 10 GbE looks something like this:

A white-box Ethernet solution like this costs less than $50,000. Cisco sells a bundle of current generation Nexus 9300 product in this configuration for a list price of $125,000. Last year, enterprises would have purchased a pair of Nexus 7000 switches with a price tag closer to $800,000.

No recovery in sight
Based on these figures, Ethernet switch sales are likely to continue to decline in the years ahead. The largest reduction in demand is that 10 GbE needs in the data center will shrink as companies migrate from physical to virtualization projects. At the same time, the VM to physical ratio is expected to increase, which itself is only half complete for most companies.

Other switch market segments also are declining as technology transitions reduce the importance of campus networks, with public clouds taking funding for new projects. Finally, the drive to cut top-line costs in CapEx and OpEx means that white-box Ethernet switches are a good choice for an increasing number of companies.

Meanwhile, vendors are desperate to replace this lost revenue and are pinning their hopes on SDN. With VMware NSX charging at $5,995 per CPU socket and setting a high bar for pricing, it's probably time to start thinking about how much you want to pay for fancy networking software because the vendors really need you.