At Interop ITX, the networking pioneer talks about Ethernet and STP, and recites her algorithm poem.
Marcia Savage

It's tumultuous times in networking as new technologies reshape an industry that was once defined by hardware speeds and feeds. Software-defined networking, disaggregation of software from hardware, and now intent-based networking are driving rapid change. At Interop ITX, attendees at the Network Transformation Summit are learning about all these trends, but also getting historical perspective.

Radia Perlman, a legend in the networking industry for her inventions that have impacted how networks operate today, kicked off the summit Monday by explaining that she thought about talking about SDN, but decided to focus on layers 2 and 3. "There's no way to understand networks today without understanding history," she told attendees. 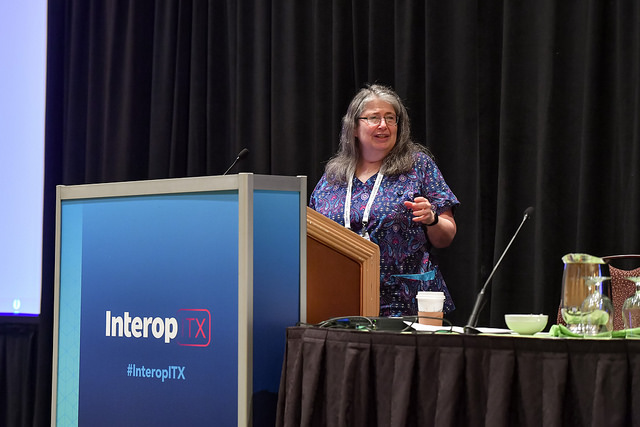 The keynote by Perlman, who is now a Fellow at Dell EMC, provided insight into the development of fundamental networking technologies such as Ethernet. While the common assumption is that we have Ethernet and IP because Ethernet is layer 2 while IP is layer 3, she said they're both layer 3 protocols, with layer 3 meaning a network forwarding packets. She described how Ethernet evolved from CSMA/CA to her Spanning Tree Protocol, which she invented when her manager asked her to create something that would enable forwarding of Ethernet packets without modifying the end node.

So why do we need two layer 3 protocols? "Now that everyone has IP in their network stacks, there's no reason to have Ethernet, you'd think," she said. IP has a number of problems, including being  configuration intensive, Perlman said, but added that layer 3 doesn't have to work that way.

Another option back in the 1980s, Connectionless Network Layer Protocol (CLNP), had 20-byte addresses, and is much cleaner than IP and doesn't need ARP or STP, among other advantages, she said. If standards bodies, which she criticized as "drunken sports fans," had adopted CLNP in 1992, it would have been much easier to move to a new layer 3 protocol.

"We would have been running with 20 byte addresses painlessly," she said. "How painful it's been to move over to IPv6…IPv6 isn't nearly as good as CLNP."

Perlman's engaging and highly technical presentation was punctuated by numerous humorous moments, such as her describing layer 5 and everything above it as "boring." In recounting her creation of STP, Perlman recited the poem she came up with at the time, her "Algorhyme." Every algorithm should have an algorhyme, she quipped: 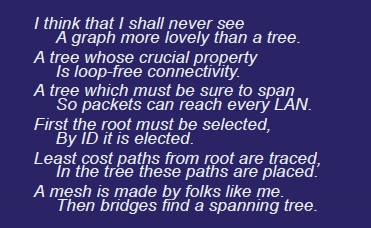 Perlman told attendees that her keynote was intended to get them to think critically. "I'm not trying to fill your head with facts. I'm trying to get you to think," she said, adding that conferences like Interop ITX are a good place to debate with peers.

Know what the problem is you're trying to solve before you solve it, Perlman said, closing her keynote with an anecdote to drive home the point. When her son was three years old, he ran up to her crying, "my hand, my hand!" She took his hand and kissed it, before asking if he had hurt his hand. No, he answered: "I got pee on it."