Juniper Networks today announced the availability of Contrail, a network overlay platform for software-defined networking for enterprises and cloud and service providers. Juniper also announced that the Contrail source code will be immediately available as open source software. As a network overlay, Contrail competes directly with VMware NSX, which was launched in August.

The Contrail platform includes several components. The first is a software controller, which is designed to run on a virtual machine and can be run in an active-active cluster. The controller exposes a set of RESTful APIs for northbound interaction with cloud orchestration tools and other applications. According to Juniper, the orchestrator can be used to request the provisioning of a virtual machine and assign it to a network. At launch, the Contrail controller works with OpenStack and CloudStack, as well as with IBM's SmartCloud Orchestrator.

The second component is the vRouter, which runs on Xen or KVM hypervisors. (Note that vRouter cannot run on VMware's ESX.) The controller communicates with vRouters via XMPP and instructs the vRouters in how to forward packets. The vRouters build tunnels between virtual machines. These tunnels run over the physical network. Juniper supports multiple tunneling protocols, including VXLAN, MPLS over GRE and MPLS over UDP. 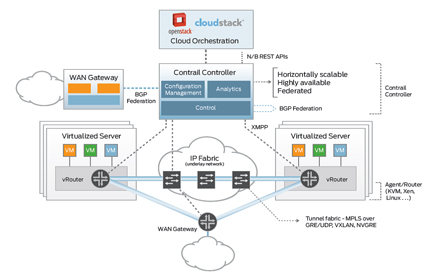 Juniper's MX series edge routers and its QFX3600 switches can serve as tunnel gateways to terminate overlays. The company also says third-party routing hardware that supports Layer 3 VPNs or E-VPNs should be able to serve as gateways.

[SDN aims to make the network more responsive to applications, but applications also need to understand network state. Find out why in Should Applications Listen To The Network?."]

Contrail integrates with virtual version of Juniper's SRX firewall, which allows the orchestration platform to instantiate virtual firewall instances. Juniper also announced a partnership program to let third-party vendors integrate with the Contrail platform. Current partners include Websense and Mirantis, among others.

Juniper is also announcing OpenContrail, an open-source version of the Contrail controller, which is available today under an Apache 2.0 license. The company says OpenContrail has everything necessary to create an overlay network. The open source package includes the controller, vRouter, orchestration APIs and management console.

Given that multiple competitors offer an overlay approach to SDN, including VMware, Nuage Networks and Midokura, the open source component helps Juniper distinguish its own offering. It may also encourage potential customers and developers to experiment with the open source package.

Ravichandran says going open source with the controller is a strategic imperative for Juniper, in part because of the open source ecosystem of OpenStack and CloudStack. "We are doing this because customers want it. They want a vendor with a production-ready product that's open-source," she says. "Customers can download the code, play around with it in lab."

She also hopes that the open source code will attract developers. "App development will happen on the northbound side," she says. "By open-sourcing Contrail, we think there will be application development, and partners can monetize it."

When asked if have a full version of the code available for free might cannibalize sales of Contrail, Ravichandran was confident that enterprise and cloud customers alike would still seek the licensed version. "Large enterprises and service providers won't put an open source controller in production. They will want support and services to tie things together."

That said, she notes that if customers wanted to run the open source version in production, they are welcome to.

Pricing for the commercial version of Contrail is $1,700 per socket for a perpetual license. A one-year subscription is available at $1,000 per socket.

[The data center is poised for transformative change. Get insights into emerging technologies in the workshop "Building Your Network for the Next 10 Years" at Interop New York, from September 30th to October 4th. Register today!]

Demystifying Private Cellular for the Enterprise
Mehmet Yavuz
January 25, 2021
Moving Towards the Edge? We’ll Need 5G and AI to Get There
Tom Foottit
January 27, 2021
Networks Must Change to Support Mainstreaming of Working from Home
Shamus McGillicuddy
January 20, 2021
Will the Emerging Edge Fix My Digital Gaming Experience?
Lori MacVittie
January 26, 2021
Networking and Security are Converging. Are You Ready?
John Maddison
January 14, 2021