Network disaggregation has been a growing trend for a few years, with a number of companies offering alternatives to traditional proprietary switches and tightly integrated software and hardware. There are startups such as Cumulus Networks that sell a network operating system that can run on white-box switches and even networking stalwarts like Juniper Networks offer a NOS that can be run on third-party hardware.

Now Cisco has climbed on the bandwagon, perhaps a bit reluctantly. In blog posts, the company quietly announced software disaggregation options in its service provider and data center portfolios. In an email, the networking giant noted that hyperscale web providers have driven demand for disaggregated solutions and service providers are interested. But Cisco added that the "vast majority" of its customers prefer to buy complete systems.

"Most desire a level of simplicity rather than the burden of having design and development teams creating and stitching together hardware and software.  Becoming systems integrators requires significant long-term costs for organizations. But… there are certain types of customers - service providers and web scale companies for instance - with unique automation and scaling demands for which disaggregating hardware from software can offer fundamental advantages," the company said.

On the service provider side, Cisco IOS XR now runs on switches and routers with merchant silicon, x86 servers as virtualized software, and specific third-party devices. 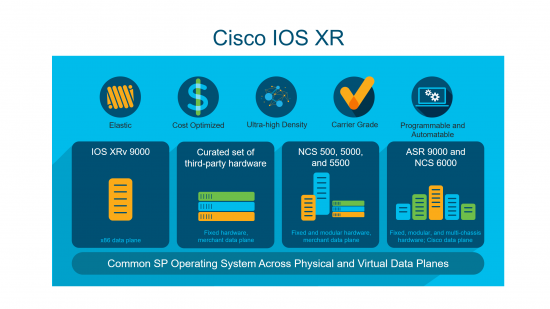 Noting the low-key nature of Cisco's announcement, without a press release or press/analyst briefings, Shamus McGillicuddy, senior analyst at Enterprise Management Associates, said Cisco would prefer to downplay this news. Cisco's email "goes to great pains to make it clear that disaggregation is hard, and only a small subset of customers wants this," he told me in an email.

"Cisco will work to keep this a small part of its business, aimed at organizations that demand this disaggregation. By small, I mean number of customers, not necessarily volumes of products shipped," McGillicuddy added. "When a company like Microsoft or Facebook or Amazon demands disaggregation, you can’t just say, 'No we don’t do that.' These companies have buying power, capable of buying huge volumes of hardware and software, and they're impossible to ignore."

While Cisco is relenting in the face of customer demand from the web-scale companies, it remains to be seen whether mainstream enterprises and service providers will try out Cisco's disaggregation options, he said.

"I don’t think we’ll see a huge wave of disaggregation interest just because Cisco finally joined the party. But it is a huge milestone for advocates of disaggregation," McGillicuddy said. "The market leader is finally bowing to market pressure and offering solutions in this space."

He wondered whether Cisco will formally partner with any third-party hardware or software vendors with its disaggregated NX-OS, and what the support model looks like. "EMA research has found that divided support models are one of the biggest impediments to disaggregation in the enterprise data center," he added.

Dan Conde, an independent industry consultant, said customers who encounter problems will have to figure out whether to call Cisco or the hardware manufacturer. "For that reason alone, I think a lot of people would chose a combined integrated solution," he told me.

Conde noted that Cisco's news comes as the Open Networking Summit takes place in Los Angeles. "So this may be a way for Cisco to gain a little bit of mind share from people who are really into the open source way of doing things and disaggregation," he said.

Facebook and other hyperscale companies have led the way on open networking, saying that it provides the agility and flexibility they require.