Cisco touts its new Catalyst 6800 switch line as a game changer, but it’s really designed to satisfy Catalyst 6500 customers without changing much at all.
Ethan Banks

The Ethernet switch market is saturated with choices. Lots and lots of choices. Cisco adds three more options today with the announcement of the Catalyst 6800 family. While Cisco touts the switch line as a game changer, it's really designed to satisfy Cisco's massive customer base of Catalyst 6500 owners.

At the top end is the 6807XL, which has a new seven-slot chassis that can use some of the existing line cards from the 6500. You get as much as 880 Gbps per slot, for a total 11.4 Tbps maximum capacity. Cisco says the 6807XL will offer service modules that allow firewalling, wireless LAN control, network analysis and other features to be baked right into the chassis. 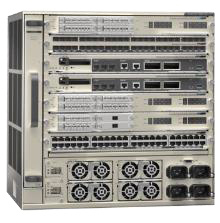 The existing install base of 800,000 6500 chassis was a chief driver for this box; the 6807XL gives customers an easy migration path to more bandwidth.

Cisco believes chassis-based service modules will be a big differentiator for the 6500/6800 in the marketplace, but I disagree. The rise of the smart, virtualized network edge makes me doubt service modules have much of a future.

Cisco also announced the 6880X, a partially fixed-configuration switch that lets mid-market customers get into higher-density 10 Gbps cheaply. The 6880X has 16 10/1-GbE fixed ports with four slots to allow for expansion; each slot is capable of 200 Gbps and up to 800 Gbps for the entire chassis. Translating the marketing speak, that means you've really got 100 Gbps per slot in a single direction, or about a 1.6-to-1 oversubscription.

In other words, this switch is capable, but does not have a non-blocking fabric. If the point of this switch has you scratching your head a bit, yes, clearly there are other switches with bountiful 10 G capacity in Cisco's lineup (Nexus 5500 and Catalyst 4500X, for instance). The fact is, the 6880X is positioned as a budget-conscious choice for the smaller enterprise.

The 6800ia is the third switch in the new line. It's a unique device. The "ia" stands for "instant access." The switch has 48 ports of 1GbE and can connect to any 6500 or 6800. When connected to the right core 6800, the "ia" inherits all the capabilities of the core switch. The core 6800 and attached 6800ia switches act as a distributed stack, with zero configuration of the "ia" switches required of the network administrator.

The point of this switch is to provide understaffed IT shops with a simple way to manage a campus environment. A 6800 core switch can connect to as many as 20 6800ia switches, providing roughly 1,000 ports that are managed from a single point. No special cabling is required to achieve this, as the uplinks are through standard 10-GbE ports dedicated to uplink duties.

The Game Remains the Same

Cisco is marketing its new switches, and a few a few other (less interesting) product refreshes of the ASR1000 and ISR router platforms, as a "gamechanger" (complete with Twitter hash tag).

This is a textbook example of hyperbole. Cisco is changing nothing whatsoever. In fact, the greatest driver for these switches was the clamor from customers who want to keep everything the same. So, folks buying the Catalyst 6800s are going to get exactly that: more of the same.

• Do you want a switch that protects your 6500 investment? Done. You don't have to change all of your line cards.

• Do you want a switch that runs the same monolithic IOS you have today? Done. Your operations can continue without any change at all.

• Do you want a switch you can get about 10 years out of while running all the features of the 6500 one day one? Done. You've got the entire kitchen sink of the 6500 IOS delivered on the new 6800 boxes.

In short, Cisco is bringing to market faster switches in the 6800. This doesn't mean they're better, and they certainly aren't game changers. Rather, it means that if you're a customer who likes to maintain the network status quo, your ship is arriving in the form of the 6800 line, which is expected to be available at the end of the year.

I'd prefer to see Cisco consolidate its switching family. By offering a limited selection of capable hardware, Cisco could fully support each product rather than spread its resources across a diverse range of micro-targeted boxes. There's really no point in adding a new switch line to the existing family of Catalyst 2000s, 3000s, 4000s and 6000s, not to mention the expanding Nexus product line.

I know the Catalyst 6500E is the go-product for lots of Cisco customers, but not for me. Why? Because for the money, the 6500E with the Sup2T was too much money for not enough potential bandwidth. You just can't fit a lot of 10GbE ports in a 6500E (at least, not at an oversubscription rate you'd want), which even in a small installation is a limiting factor. So I was done with it, outside a limited role at the access layer or a small office deployment.

Instead, I prefer the Nexus product line within the Cisco portfolio because you can accomplish an awful lot by pairing Nexus 2000-series Fabric Extenders with 5500s or 7000s. I also like the modularity of the NX-OS, and I find the Nexus CLI preferable to that of the IOS.

Is this a perfect solution? Perhaps not. Is it as full-featured as the Catalyst line? Not as such. But with bandwidth to burn, the basics down pat, and interesting new features like vPC, OTV and FabricPath in the mix, the Nexus and I are friends, for better or worse.

But that's me. If you're a Catalyst 6500 shop, sit tight on that Nexus purchase order, and see how the new 6800 product set lines up with your upcoming projects and budget line items. You'll be able to do everything you do today, and drop fewer frames while you're at it. Maybe that's not a game changer, but it's not all bad.