Report shows that for the first time in five years, enterprise networks are getting younger.
Marcia Savage

Enterprises are refreshing their networks at a quicker pace as they take a more strategic approach with an eye on programmability and meeting mobility requirements, according to a new report from IT services provider Dimension Data.

"For the first time in five years, networks are getting younger. Fifty-eight percent of devices are now current, an 11-percentage point increase from last year. Companies are starting to refresh equipment earlier in its lifecycle," the company said in its 2016 Network Barometer Report. "Digitization strategies are top of mind, including workspace mobility and collaboration, the Internet of Things, and automation."

According to the report, the percentage of aging devices in networks -- Dimension Data defines aging devices as past end of sale, but not end of support -- fell from 44% in 2014 to 33% last year. The rising percentage of devices that are currently sold and supported means that "companies are no longer tactically replacing obsolete devices with like-for-likes, but they’re replacing fully functional and supported ageing devices," the company said in its report. "We believe the reason is that they’re pursuing architectural strategies to move towards the new generation of wireless and programmable devices."

The report found that the number of aging and obsolete (no longer supported) network devices decreased much faster in the Americas than in Europe, Asia-Pacific, and Australia, which it chalked up to the release of pent-up spend following four years of tight budgets. 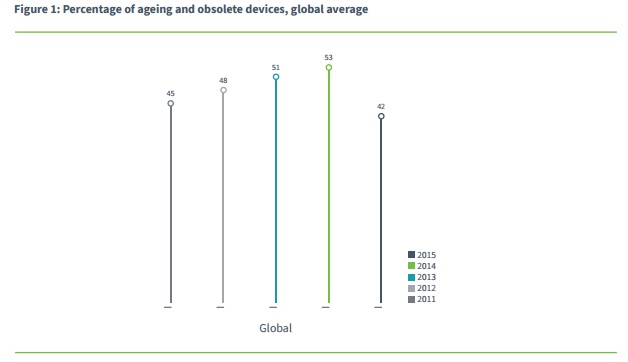 This year's report found that the percentage of wireless access points supporting 802.11n and up rose to 33.4% up from 26.5% in last year's report, which Dimension Data attributed to the need to handle the higher throughput required by enterprise mobility and collaboration strategies. This year also saw an 18-percentage point increase in switches with 10 GbE uplinks.

Adoption of IPv6-ready network equipment rose from 21% to 41% in the last year.

Even though networks are getting refreshed at a quicker pace, they're becoming less secure, according to the report. Of the 97,000 network devices Data Dimension assessed, 76% had at least one known security vulnerability -- the highest figure in five years, and up from 60% last year.

"We see a number of clients, particularly in Europe, putting more of their investment into strategic refresh of network equipment, and less into day-to-day operational maintenance. By failing to keep up to date with software patches on their new equipment, they risk making their new networks less secure," Dimension Data said.

According to the report, some parts of the network are more vulnerable than others, with aggregation routers and access switches the most vulnerable of network device categories.

Despite the apparent transition to strategic network upgrades, few enterprise networks are ready to support software-defined networking, according to the report, which found only 1.3% of data centers switches were SDN-ready in 2015.

“The data that was collected for the Network Barometer Report was captured during the 2015 calendar year. Our findings are that only a small percentage of data centre switches deployed in client production environments are capable of supporting SDN, which is consistent with new technology in the early-adopter phase," Gary Middleton, Dimension Data Networking senior practice director, told me in an email.

"However, we saw significant growth in the sales of SDN capable switching products during 2015 and this momentum has been maintained through 2016 so far, so we fully expect this statistic in our report to grow significantly," he added. "In addition, clients are getting more comfortable with the concept of programmable network infrastructures and we expect 2017 to be a year of inflection with almost all sales of data center switching products to be SDN capable.

Understanding the Network Impact of SASE

While SASE seemingly negates the importance of on-premises security tools, it’s likely that most enterprise organizations will still require them as part of a hybrid cloud security architecture.

Networking and Security are Converging. Are You Ready?

Once you've built a networking solution built on the foundation of security-driven networking—one that weaves security and networking functionality into a single system—you're ready for anything.

SASE is not a new technology offering, but it is a more rigorous and strategic approach for tightly integrating several existing security technologies.

What You Need to Know About Security Challenges in 2021

Businesses must adapt their security practices, so they can take advantage of the benefits of work-from-home models without creating extra risks.