IT pros are anxiousÂ about the security risks smart gadgets pose to their networks, yet many organizationsÂ aren't preparing for the Internet of Things onslaught, according to a survey released today by Spiceworks. While almost 90% of the 440 IT pros surveyed said the influx of IoT devices creates security and privacy issues, only 32% are taking steps to prepare for IT in their workplace.

The study, "2016 IoT Trends: The Devices Have Landed," revealed that IT pros' top IoT security concern is more entry points into the network (84%). Seventy percent of those polled said IoT manufacturers aren't implementing enough security in their products while 68% cited default passwords and 66% identified a lack of IoT standards as top IoT security hazards.

Security cameras, projectors, locks, RFID reads, and badge readers are the most prevalent IoT devices in the office, according to the survey, but the number of wearables is growing. Since Spiceworks conducted a similar IoT survey in 2014, the number of organizations connecting devices like smart watches, fitness monitors, and headsets nearly doubled (from 13% to 24%).

And it's those wearables that have IT pros most concerned: 53% cited wearables as the most likely source of a security breach among IoT devices connected to their network. Fifty percent are worried about video equipment becoming the source of a breach, and 46% are concerned about attackers targeting physical security devices like locks and gates, according to the study by Austin-Texas-based Spiceworks, which provides a professional network for IT pros. 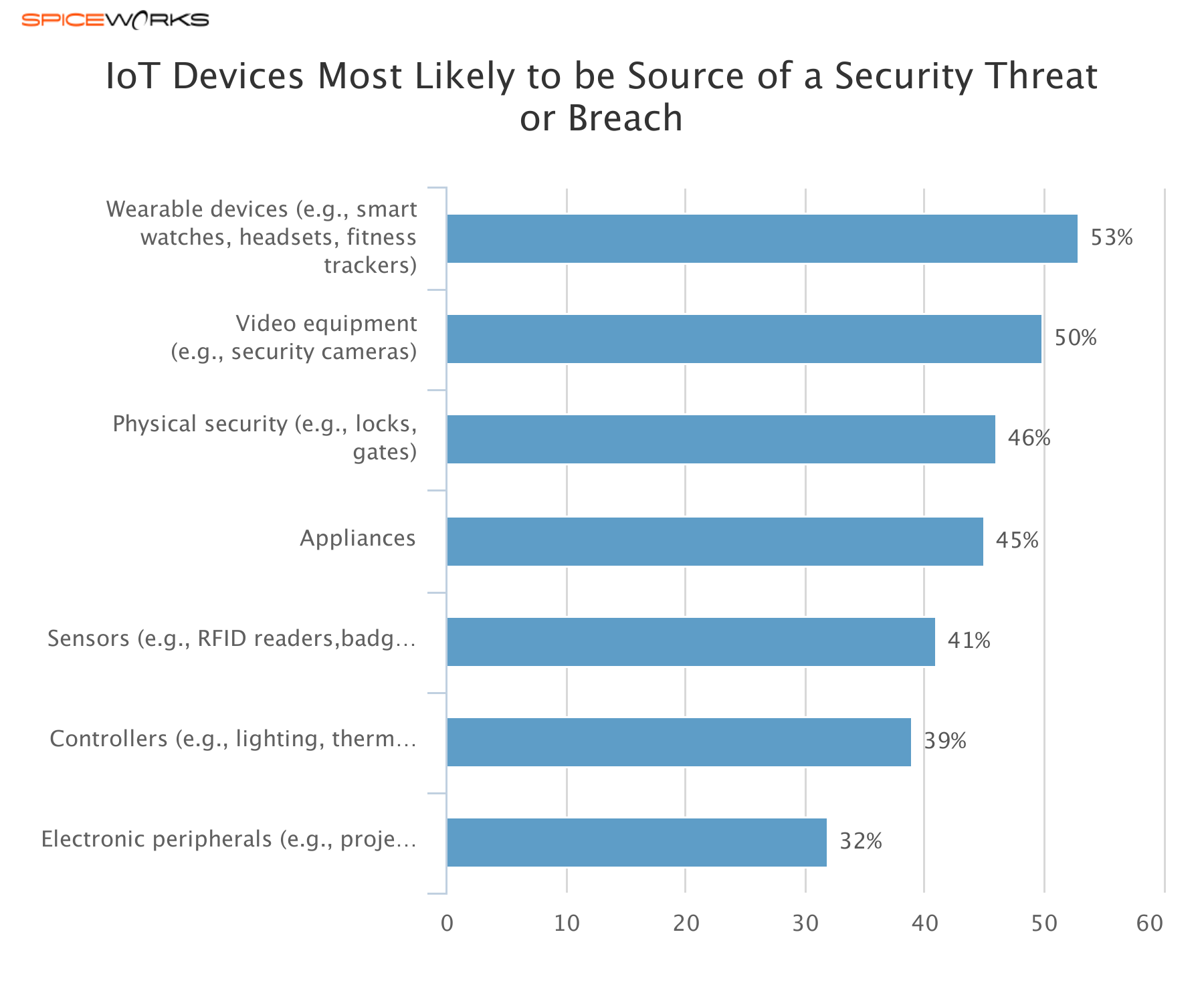 When asked to identify the reasons they're not preparing for IoT on their networks, 47% said the value of monitoring IoT devices remains unclear, 38% cited lack of time and staffing, and 37% said they lack budget.

With more devices connecting to the network, organizations see security as more of a challenge than bandwidth, according to the study. In 2014, survey respondents cited insufficient bandwidth as the top barrier to keeping user connected to the network. This year, 65% of those polled cited security as the top barrier, followed by equipment problems. Insufficient bandwidth came in third at 37%, down from 45% in 2014.

The report, sponsored by Cox Business, was conducted in March and polled Spiceworks members in North America, Europe, the Middle East, and Africa.

To learn more about IoT and its impact on IT, attend the Internet of Things Summit at Interop Las Vegas this spring.Â Don't miss out!Â Register now for Interop, May 2-6, and receive $200 off.

Organizations likely to adopt SASE faster than others are those that are embracing a cloud-first or cloud-native philosophy.

The real goal of zero trust isn't necessarily to prevent every breach—it's to limit the movement of malware within the network and thus limit the damage it can do.