VMware's VSAN Benchmarks: Under The Hood

When VMware announced the general availability of VSAN in March, it reported some frankly astounding performance numbers, claiming 2 million IOPS in a 100 percent read benchmark. Wade Holmes, senior technical marketing architect at VMware, revealed the details of VMware's testing in a blog post. Since, as I wrote recently, details matter when reading benchmarks, I figured I’d dissect Wade’s post and show why customers shouldn’t expect their VSAN clusters to deliver 2 million IOPS with their applications.

The hardware
In truth, VMware’s hardware configuration was in line with what I expect many VSAN customers to use. The company used 32 Dell R720 2u servers with the following configuration:

When I commented on the testing on Twitter, some VMware fanboys responded that they could have built an even faster configuration with a PCIe SSD and 15 K RPM drives. As I'll explain later, the 15 K drives probably wouldn’t affect the results, but substituting a 785 GB Fusion-IO ioDrive2 for the Intel SSD could have boosted performance. Of course, it would have also boosted the price by about $8,000. Frankly, if I were buying my kit from Dell, I would have chosen its NVMe SSD for another $1,000.

Incremental cost in this config
Before we move on to the performance, we should take a look at how much using the server for storage would add to the cost of those servers: 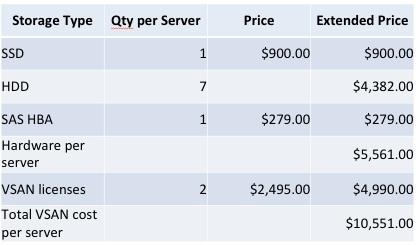 Since VSAN will use host CPU and memory -- less than 10 percent, VMware says -- this cluster will run about the same number of VMs as a cluster of 30 servers that were accessing external storage. Assuming that external storage is connected via 10 Gbit/s Ethernet, iSCSI, or NFS, those 30 servers would cost around $208,000. The VSAN cluster, by comparison, would cost $559,680, making the effective cost of VSAN around $350,000. I thought about including one of the RAM DIMMs in the incremental cost of VSAN and decided that since these servers use eight DIMMs per channel, that would be a foolish configuration.

That $350,000 will give you 246 TB of raw capacity. Since VSAN uses n-way replication for data protection, using two total copies of the data -- which VMware calls failures to tolerate=1 -- would yield 123 TB of useable space. As a paranoid storage guy, I don’t trust two-way replication as my only data protection and would use failures to tolerate=2 or three total copies for 82 TB of space. You’ll also have 12.8 GB of SSDs to use as a read cache and write buffer (essentially a write-back cache).

So the VSAN configuration comes in at about $4/GB, which actually isn’t that bad.

For its 100 percent read benchmark, VMware set up one VM per host with each VM’s copy of IOmeter doing 4 KB I/Os to eight separate virtual disks of 8 GB each. Sure, those I/Os were 80 percent random, but with a test dataset of 64 GB on a host with a 400 GB SSD, all the I/Os will be to the SSD, and since SSDs can perform random I/O as fast as they can sequential, that’s not as impressive as it seems.

Why you should ignore 2 million IOPS
Sure, VMware coaxed two million IOPs out of VSAN, but it used 2 TB of the system’s 259 TB of storage to do it. No one would build a system this big for a workload that small, and by keeping the dataset size so small compared to the SSDs, VMware made sure the disks weren’t going to be used at all...