Have You Hugged Your Sysadmin Today?

Celebrate System Administrator Appreciation Day by showing some gratitude toward the IT pros who do it all.
Susan Fogarty

The last Friday of July is System Administrator Appreciation Day, so be sure to take some time today to honor your favorite administrator in style. If you're not sure what's appropriate, the SysAdmin Day website recommends cake and ice cream, pizza, cards, gifts, words of gratitude, balloons, confetti, streamers, and "custom T-shirts celebrating the epic greatness of your sysadmin(s)." You could also sing this geeky-cool rock ballad crowdsourced by Spiceworks to the admin of your choice. 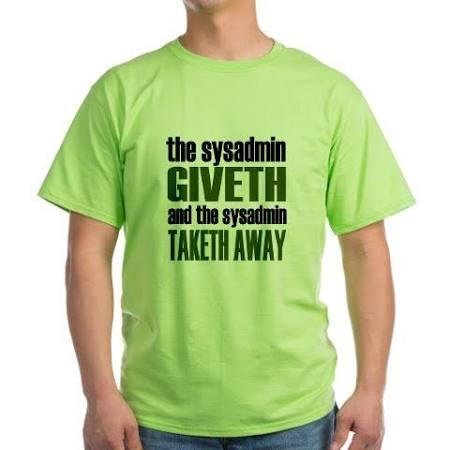 In truth, the term "sysadmin" is used a little broadly, and can sometimes conjure thoughts of the guy in the wiring closet who sets up email accounts and unjams the printer. In fact, System Administrator Appreciation Day actually was inspired by a Hewlett-Packard ad for laser printers. It depicted a sysadmin receiving flowers and gifts from his grateful co-workers. Sysadmin Ted Kekatos had just installed several of the printers at work, and he decided to create an actual day when the scenario in that ad could play out.

That was in 2000. Today's sysadmins do much, much more, and the folks at SolarWinds set out to quantify that. They surveyed system administrators about the duties they actually perform and found the most common were: troubleshooting IT problems (89%); monitoring system performance (87%); and answering technical queries and assisting users (85%). A range of other responsibilities also rated highly, most having to do with system and network performance, as you can see in the infographic below.

SolarWinds then compared the average salary of a sysadmin to the amount a company could potentially spend to staff all of the functions a single sysadmin typically performs. They estimated a business actually saves $612,000 per year per sysadmin, assuming it would hire a full-time employee for each function performed. Clearly, that's not a realistic assumption, and the calculation is a bit exaggerated. It does, however, serve to make the point that sysadmins are highly versatile employees providing exceptional value to the workplace.

And the responsibilities listed here may not be giving some sysadmins -- especially those working in large organizations -- quite enough credit. I know of many IT pros with the title of system administrator who deal with technologies like virtualization and cloud administration on a regular basis. The sysadmin may seem like a bit of a catch-all title, but maybe that's happened because they really can do it all. Give those people a T-shirt!