The Flash-Native Future is Coming, and You’ll Like its Price Tag 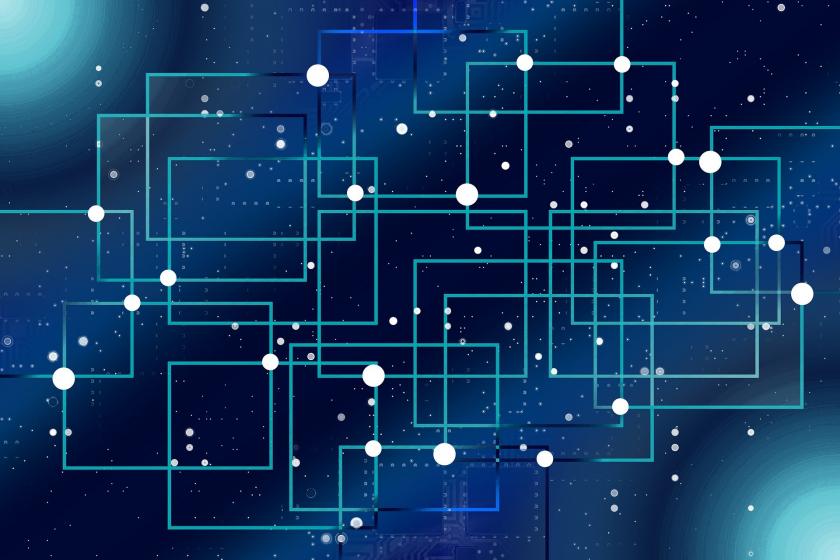 Hard-drive disks (HDD) have long since dominated the datacenter, providing enterprises with sufficient storage capabilities at a low price. But today’s enterprise storage needs are changing as data becomes increasingly unstructured, created (or captured) by machines to power new workloads and accelerate insights. To add to this growth challenge, enterprises are now requiring better performance levels and faster speeds to manage this unstructured data and keep up with the rapid pace of innovation – demands legacy HDD’s spinning disks often can’t provide.

Flash storage is an obvious solution; it delivers faster performance and better resiliency in a dense footprint which requires far less power, reducing cost and environmental impact. And the industry is catching on with flash adoption levels steadily rising among enterprises. In fact, the block data market has largely made the leap from 15K hard drives to all flash in the last ten years. And the benefits of flash in the datacenter are beginning to extend beyond block storage to support the market need for file and object data – both of which are becoming increasingly dependent on speed to support a unified and scalable platform. Traditionally, there has been just one key drawback: its higher price (compared to HDD) has been a long-standing challenge that has prevented enterprises from being able to rapidly adopt flash storage solutions at scale.

The HDD era over: How history is repeating itself with flash storage

This trend is beginning to shift. According to a whitepaper developed by Wikibon, flash native solutions are expected to become the primary enterprise storage platform by 2027. To understand the reasoning behind this claim, it's important to understand the history behind HDD storage adoption among both enterprise and consumer markets. In 2010, HDD had reached peak popularity, with 92% of HDD shipments being used for consumer devices like PCs. This high demand led to accelerated production of HDD units, which ultimately drove down its price. Two years later, adoption began to rise rapidly among enterprises who wanted to benefit from HDD's lower price and improved capabilities.

Today, the same phenomenon is occurring with flash storage. Consumer adoption of flash has already experienced much success, beginning with Apple, which introduced flash-only devices (the iPod Nano and iPhone) in the early 2000s. The trend has played out across consumer devices (like cameras, flash drives, and more), which use flash as the primary storage platform. Flash gives technology providers the ability to create devices that are smaller, sleeker, and quieter. This year alone, over 60% of PCs were created with flash drives. Based on the fundamentals of Wright's Law and the relationship between consumer and enterprise demand in the storage market, enterprise adoption of flash storage is sure to follow suit.

Wright's Law is centered on volume. Increased volume production drives down product cost, making products more attractive for potential buyers – which in turn causes an increase in demand, innovation, and investment. Using Wright's Law, Wikibon predicts that as flash storage adoption grows, its price will erode, causing datacenters to find flash storage solutions more attractive than they already were. In fact, flash storage prices are falling by about 33% per year, and by 2027, flash will be cheaper than HDD. 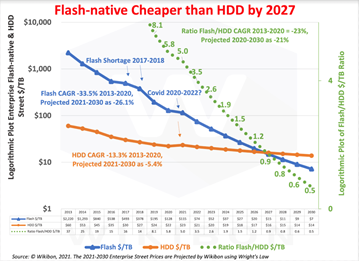 Total cost of ownership (TCO) considerations make a strong case for flash even now. Productivity efficiencies and the benefits of real-time processing and analytics to power business processes is significant – and more transformative than IT cost savings. According to Wikibon, the value of flash to enterprise lines of business is ten times higher than the benefits to IT.

But this progression is not always linear. Unexpected events and economic disturbances like the COVID-19 pandemic can impact the rate of technology innovation, adoption, and production. In today's market, disrupted supply chains caused by the pandemic are causing virtually all forms of IT technology to rise in price despite growing demand, including flash storage. But over time, the market will correct itself, and flash storage prices will continue on their downward trend.

The future is flash

All-flash data centers are the data centers of the future, giving organizations the ability to achieve better infrastructure performance, speed, and efficiency. With flash storage, organizations can power a variety of digital processes, from supporting financial transactions, enabling data analysis and mining to powering email, data back-ups, and archives. On a broader scale, flash storage's ability to conduct analytics and processes in real-time and simplify and automate operations can help organizations free up more human and financial capital for innovation while giving them the flexibility they need to pivot in a rapidly changing environment quickly.