HGST has announced that it has put seven platters onto a 3.5-inch form factor, thanks in part to replacing the air in the drive with helium. Find out what this could mean.
Howard Marks

Last week, Western Digital's HGST subsidiary announced that it has managed to squeeze seven platters into the standard 3.5-inch disk drive form factor, in part by replacing the air in the drive with helium. Today's highest-capacity drives have four or five platters, so a seven-platter drive with the same bit density as today's 4-Tbyte models would hold a whopping 5.6 Tbytes of data.

Western Digital acquired HGST--most recently known as Hitachi Global Storage Technologies--last year as part of the continuing consolidation of the disk drive market. Western Digital agreed to run HGST as an arm's-length subsidiary for the next few years in several countries

Apparently, filling a disk drive with helium is a better deal than the trendy process of filling your car's tires with nitrogen (that can set you back about $10 a tire, with limited benefit over a quality fill with plain old air). Sure, that expensive nitrogen generator at the Mercedes dealer eliminates the water and oil that the 30-year-old compressor at Akbar and Jeff's Tire Hut may add to your tires along with air. And if you're a long-haul trucker who runs a set of tires over a quarter of a million miles through multiple retreads, eliminating the oxygen from the fill may reduce rot a little bit. But for the rest of us, the shiny N2 valve caps are more effective as a status symbol than the gas that they represent actually helps.

In addition to being inert, helium has some physical properties that make it attractive for use in a disk drive: Its low density but high heat-carrying capacity will allow HGST to fly the heads closer to platters and more efficiently remove the heat generated by the drive's motor and positioner, while reducing the amount of heat generated by gas friction. HGST demonstrated a prototype drive at an investor event, showing 45% lower power consumption per terabyte and an operating temperature 4 degrees Celsius lower than conventional drives. Since Helium is inert, it could also enable the use of disk coatings that would oxidize in a standard atmosphere. Engineers have been thinking about helium-filled drives for years. Maxtor and Seagate were granted a patent on inert gas-filled disk drives in 1994.

As a trained chemist, I understand better than most storage guys just how much engineering helium-filled drives will take. Helium molecules are incredibly small and will diffuse through not just the thin latex of a toy balloon but even through the solid metal of a drive cover--and especially through the gaskets that currently seal the drive cover to the cast baseplate. This means a helium-filled drive will need a more rigid cover and better gaskets than current drives just to contain the helium during a five-year life.

Contrary to popular belief, today's disk drives aren't completely sealed--they have a breather hole that's equipped with a very fine filter to keep contaminants out of the drive and is used to equalize the pressure between the disk drive and its environment. One unpleasant side effect of this is that disk drives become less reliable at altitudes above about 10,000 meters (30,000 feet), as lower air density causes the heads to fly too close to the platters. The photo below shows this breather hole on an HGST drive, along with the "Do not cover this hole" label. 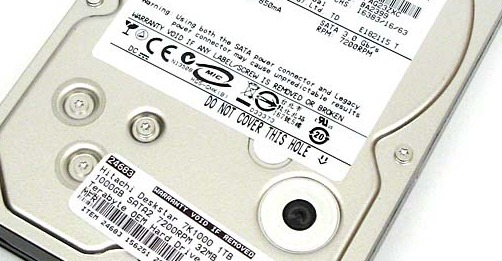 Luckily, helium is readily available at reasonable prices at party stores so we won't have to worry about storage geeks cracking open disk drives so they can inhale the helium and talk funny.

We can now put helium filling in the same category as heat-assisted magnetic recording and bit-patterned media: technologies that will ensure that spinning disks remain a viable storage medium for bulk data as flash and future solid-state technologies take over the performance storage market.