EMC on Thursday confirmed the rumors: It's acquiring Israeli startup ScaleIO to beef up its flash products division. An Israeli startup with an impressive executive team, ScaleIO developed a software product to turn storage capacity across a large cluster of servers into a shared pool of storage.

EMC has a long history of picking up valuable pieces of technology in Israel, starting with its flagship Symmetrix storage array, designed by Moshe Yanai, and continuing through the RecoverPoint continuous data protection (CDP) product, based on technology from its 2006 acquisition of Kashya. More recently, EMC snapped up XtremIO and its all-solid state array last year for a whopping $430 million dollars before the company shipped its first product.

One of ScaleIO’s founders, Erez Webman, was previously CTO at XtremIO while others were key players at IBM and Topio, a CDP vendor that counts as one of NetApp’s less-than-fully successful acquisitions. The financial details of the deal haven’t been announced, but I don’t think it was anywhere near the $200 million to $300 million cited in the rumor mill. ScaleIO had attracted $12 million in a single round of funding from Greylock Partners, Norwest Venture Partners and former Data Domain CEO Frank Slootman.

When rumors of the acquisition surfaced in June several of us in the storage chattering class--including ESG founder Steve Duplessie, who’s written about why Israeli startups sell out--joked that since EMC was snapping up Israeli storage firms as soon as they came out of stealth, we should form our own. I promptly registered ShalomIO.com, hoping to get a call from our friends in Hopkinton offering the $3 million to $5 million that must be stuffed between the couch cushions in EMC CEO Joe Tucci’s office.

I had a chance to chat with the ScaleIO guys back in December when they first came out of stealth, and while I found the concepts behind their technology interesting, I wasn’t wowed. Basically you install a driver for ScaleIO’s ECS on each of your Linux application servers and it uses the capacity of those servers to create a storage pool that the servers can access. Data is stored in distributed chunks across the servers, and protected by storing duplicate or triplicate copies of each chunk on different servers. Distributing chunks across a large number of servers spreads the workload when an application’s storage I/O demands peak or when the system has to rebuild after a disk or node failure.

ScaleIO also realized that if it was going to attract more than software-defined purists, the system would have to be easy to use, so the company put a nice dashboard on it. 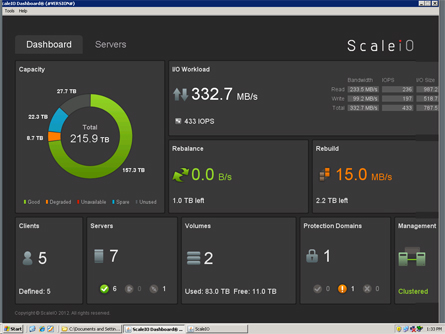 I was more surprised that EMC was putting ScaleIO in its Flash division than I was by the acquisition. While my first reaction when ScaleIO briefed me wasn’t that this was a great software-defined storage product, I did see that it would make a lot of sense for some solution provider environments with huge server farms where leveraging all those disk drives, or even disk drive slots, would be very cost-effective.

While ScaleIO’s ECS does support SSDs, it doesn't include any caching or automated tiering to make running hybrid environments easy. Disk drives and SSDs have to be in different pools and workloads manually assigned. Hopefully, EMC will take its existing caching technology and combine it with ScaleIO’s replication to create a platform that can handle the more general case workloads most of us face on a day-to-day basis.

The EMC-ScaleIO deal might be a boost for French storage provider Seanodes, which has been shipping a similar shared internal storage solution for several years but hasn't yet been successful on this side of the Atlantic.