Despite all the disruption in IT infrastructure with the rise of cloud computing, Cisco managed to hold onto its dominant position in the market in 2016, according to a new report from Synergy Research Group.

The report, which looks at data for the last four quarters, shows Cisco as the market leader in six out of seven enterprise infrastructure market segments: switches and routers, enterprise voice systems, network security, UC applications, WLAN, and telepresence. Data center servers is the only segment Cisco didn't dominate; it's led by Hewlett-Packard Enterprise, which is the No. 2 vendor in both switches and routers and WLAN, according to Synergy.

Cisco "remains in a league of its own despite a variety of challenges," Synergy Research Group Founder and Chief Analyst Jeremy Duke said in a statement. "HPE is the only broad-based competitor to challenge Cisco's dominance though it does not compete in all of the major segments."

Data centers servers, which make up the biggest segment of the enterprise infrastructure market, saw the biggest revenue decline in 2016 – nearly 5%, according to the report. The second-largest segment – switches and routers – grew a modest 1%.

The decline in data center server revenue and the tepid growth in switches and routers is mostly due to public cloud adoption, John Dinsdale, a chief analyst and research director at Synergy Research Group, told me in an email interview. "Enterprises generally are on a drive to reduce the number of data centers they have to run and manage," he said. 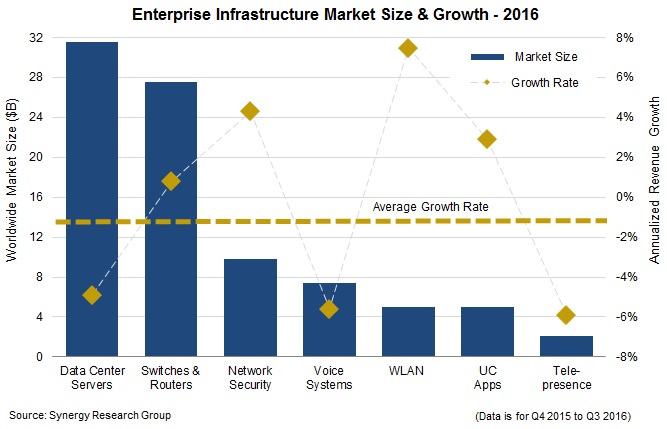 As enterprises migrate to the cloud, Cisco faces a number of challenges. Dinsdale said the company will need to work flexibly with its enterprise customers and stay on top of the migration to more software-driven architectures and products. Cisco also will need to compete effectively with startups and Chinese vendors, he said.

Whether Cisco can maintain its dominance in enterprise infrastructure clearly depends on how well it plans and executes its plans, Dinsdale said.

"But it is tough to see anyone seriously challenging Cisco's leadership – the gap between it and its competitors is too big and Cisco's position is too entrenched. Cisco will not stand idly by and watch its competitors eat its lunch," he said.

While the data center server space declined, the WLAN market saw the most growth at 7%, followed closely by unified communications applications, which grew about 6%, according to the Synergy report. Revenue for both the enterprise voice and telepresence markets dropped about 6%, a decline Synergy attributed to aggressive price competition and market disruption.