At ONS, Google describes Espresso, the next step in its SDN strategy.
Marcia Savage

For some, plenty of questions linger around software-defined networking. Is it viable? Is it the future of networking? Or after years of hype, is it dead?

But for Google, where engineers have been applying software-defined networking principals to the company's vast network infrastructure for several years now, SDN is simply the way things are done. "For me, the question of whether software-defined networking is a good idea or not is closed. SDN is how we do networking," Amin Vahdat, Google Fellow, said Tuesday in a keynote at Open Networking Summit 2017 in Santa Clara, Calif.

Google realized more than 10 years ago that it couldn't buy a network to meet its needs, so it began applying SDN principles in a series of networking initiatives, Vahdat said: Jupiter, a data center interconnect; B4, Google's private WAN, and Andromeda, a Network Function Virtualization stack for Google Cloud Platform. At ONS, Vahdat unveiled the next step in Google's SDN strategy: Espresso, which extends Google's approach to the peering edge of its network, where the internet giant connects with other networks worldwide.

Vahdat described Espresso – which has been in production for more than two years -- as "SDN for public internet." He added, "If you're using Google, there's a good chance that Espresso is responsible for carrying some of that traffic." 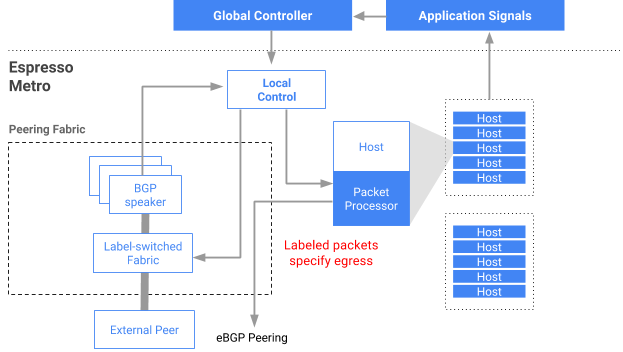 Before Espresso, Google ran protocols on high-end routers, but the protocols were limited to a local view and were optimized only for connectivity, not for the best user experience, he said. Espresso's software-based design takes a global view and determines in real time the best path based on the application; the result is higher availability and better performance, according to Vahdat.

"Espresso delivers two key pieces of innovation. First, it allows us to dynamically choose from where to serve individual users based on measurements of how end-to-end network connections are performing in real time. Rather than pick a static point to connect users simply based on their IP address (or worse, the IP address of their DNS resolver), we dynamically choose the best point and rebalance our traffic based on actual performance data. Similarly, we are able to react in real-time to failures and congestion both within our network and in the public internet."

"Second, we separate the logic and control of traffic management from the confines of individual router 'boxes.' Rather than relying on thousands of individual routers to manage and learn from packet streams, we push the functionality to a distributed system that extracts the aggregate information. We leverage our large-scale computing infrastructure and signals from the application itself to learn how individual flows are performing, as determined by the end user’s perception of quality."

At ONS, Vahdat said Espresso "has really been transformative" for Google. Looking ahead, he sees networking playing a vital role in the next phase of cloud computing, defining next-generation storage infrastructure and enabling fundamental new capabilities.

In another ONS keynote, Martin Casado, general partner at Andreessen Horowitz, looked back on the evolution of the famous SDN startup he co-founded, Nicira. VMware bought the company in 2012 for $1.2 billion.

While Nicira accomplished its high-level goal of decoupling hardware from software, Casado said that in retrospect, there are some things he would do differently. "If I had to do it all over again, I'd focus on the application. It doesn't make sense to have a general SDN platform because the problems are so different," he said.

In an interview after his keynote, Casado said he's been coming to ONS since the beginning and while many of the topics remain the same, there's a noticeable level of maturity now. "Early on, we were just dreamers and mostly academics…Now it's a legitimate, mature industry. There are success stories."

As for what's next, Casado said a couple trends will place new demands on networks: the growing focus on APIs, and the evolution of AI. Infrastructure is shifting to a microservices architecture, which has implications for security and visibility – a trend enterprise networking pros need to keep an eye on, he said.